Prince Solin Felwing’s exile on Earth went from tranquil to dangerous with a spark of magick. Now, severed from his redemption and his friends at the soup kitchen, Solin is left to sort out his unstable powers, his guilty conscience, and the realities of pursuing a relationship with a certain charming barista. At least his human friend Sam stuck around, although he’s getting tailed by his ex and his tech is going haywire, so things aren’t going great for him either.

As the holidays draw near, Solin discovers his name on someone’s Naughty List. With a protection detail of ghosts from his past, and a growing threat from the rogue humans of the Shadowfall Alliance, Solin must keep his worlds from colliding without losing what few friends he has left. Because those hunting him no longer care about collateral damage; they’ll torch everything he’s built, and anyone who gets in the their way will be consumed by the flames.

The new ringtone I’d applied to Sam’s number echoed in the kitchen. I paused the television and glowered at the phone from the sofa. What now? Another blip notifying him of a portal from Cydrithenna? A warning that agents from the Shadowfall Alliance were on their way to kill me? Or had he merely hacked into my phone and heard what had happened with Brida on Halloween?

I’d already scolded myself enough for that. I didn’t deserve to have any semblance of my powers back, nor anyone’s kindness. Not after the terror I instilled in someone I cared about, someone who never did anything wrong and who did not betray me. I had betrayed her. I had become my worst nightmare. I hadn’t changed at all.

The phone ceased ringing. A minor pause. It blared again.

“Fine.” If this curse was going to fade on me, then I might as well make use of my powers. I continued lying on the sofa and willed the phone toward me with telekinesis. It floated unsteadily. With illusory magick, I transformed it into a tablet, then a chair, then a dog. Easy enough. I returned it to its original state and answered.

“Did I wake you? You sound pissed.”

“I want you to get out of there and come hang out with me.”

The phone rang again the moment I hung up.

“Sam. I mean it. I’m not interested. And since when do you call me again? I thought those friends of yours had gotten access to your phone.”

“Line’s safe again. Trust me,” he said over the sound of clanking glasses and laughter. “And hey, whatever’s bothering you, I promise, it’s not going to—yeah, two more of those, and a round for that table over there, yeah, thanks—sorry. It’s not going to bother you anymore, I promise.”

I rubbed my forehead. Although my powers had returned, the ability to erase tension headaches eluded me. “Are you at a bar?”

“Yes, and you should be here too. I’ll text you the address.”

The thought of drinking made my stomach churn. “I’ll pass.”

“Don’t hang up again. Look, what do I have to do to get you to come out tonight?”

“Perhaps tell me why it’s so urgent.” I’d abstained from drowning my guilt in liquor last night, despite my slightly improved constitution. I’d woken up on the floor of my bathroom too many times early in my exile, and I didn’t care for it. With Sam, I’d be putting myself in that compromising situation again, and risked deepening the hole I had dug myself into.

I sneered at the phone in my palm and let it rest on my chest. Sam’s message lit up the screen. I barely lifted the phone and stared at the address until the screen decided I’d been idle too long. Its light faded.

As did my judgment.

Sam might’ve actually heard my desire to help humanity more than one meal at a time and brought in someone new for me to work with. I had no intention on slogging my way back to the kitchen again. I’d already lied to Victoria about being ill for today’s shift, and she blamed a hangover that I wish I’d had as punishment for lying to her. But what of tomorrow, when Brida and I would be there together?

Would Brida even show?

I could not let Brida leave a place she loved. This was her workplace first, not mine.

I changed out of what I’d fallen asleep in last night, choosing gray pants and a plain casual sweater with sleeves that had trouble staying rolled up. I threw on a light coat and headed to the address. I didn’t mask, but being so vulnerable, and apparently recognizable, to at least one person in Polaris made me paranoid. How long until Gaian technology, as primitive as it was, encapsulated my digital image and fed it through a mystical algorithm to determine my identity? In my prime, I’d been able to fool cameras, but I doubted that ability had returned yet. I glanced at the storefront windows as I walked. At least I could manipulate reflections again.

I arrived at the bar, passing through the outer gate of smokers and their toxic cloud into an upscale dive of wood, warm light, and rock music. Athletes graced the screens, and few patrons paid any attention to the newcomer. Sam knew what he was doing.

I found Sam at a high top table flirting with a woman I didn’t recognize. He whispered something to her that had the effect of politely shooing her. I was relieved he hadn’t called his non-friend out to hook up with a stranger.

“Aren’t you in a monogamous relationship, Sam?” I said, taking a seat on the stool across from him. I hung my coat on a hook beneath the tall table.

“We’re kind of experimenting with this whole ‘she isn’t monogamous right now, and it’s all my fault’ thing.”

“It’s been an ongoing experiment. Actually we broke up before you arrived. Not here. Tonight. But here. You know. Here. Earth.”

“And then we got back together again. And broke up. Last week. I think.” He shook his head. “Anyway, feels good to get your ass out of bed, doesn’t it?”

“I wasn’t in bed.” Never mind that I’d been lying on the sofa.

“I was watching something.”

He blinked at me. “You were watching…” He leaned over the table, eyed me like I were a specimen, then leaned back. “Okay, hold on. You were watching Star Trek. Which one? Go.”

“Sorry, not episode, I mean series.”

I blinked at him. “I don’t understand.” 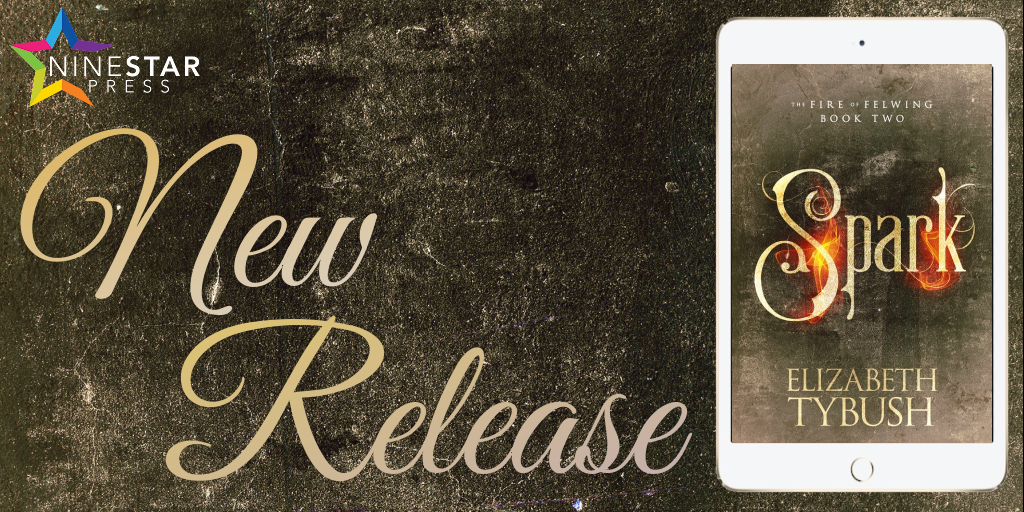 Liz plays way too much Minecraft and dreams about producing a television series. She loves an old-fashioned film noir and, unlike her character Solin, takes her coffee with a healthy dose of milk. Recent accomplishments include a 2019 fellowship at the Storytellers’ Institute and the book you’re about to read.

Flicker is her debut novel with NineStar Press. To learn more about The Fire of Felwing series and other upcoming stories, visit Liz at elizabethtybush.com.

One thought on “New Release Blitz: Spark by Elizabeth Tybush”