The Story of Lucius Cane: Book One by Vanya Ferreira

London, 1794. Lucius Cane, a peculiar sort of vampire, comes upon an opponent the likes of which he has never seen before – a brute with remarkable abilities. But not all is as it seems as their encounter unfolds in a manner that neither of them expected.

The Story of Lucius Cane: Book One on Goodreads

Lucius Cane is a vampire living in late 1700s London. Book One introduces the reader to the title character as well as antagonist Jack ‘The Hound’ who is trying to kill him.

This is a short, but enjoyable read. Lucius is an intriguing character with a certain amount of empathy for humans. I do prefer vampire novels where the supernatural beings are given a more human side, but still connected to their vampire natures too and this certainly is the case here. Lucius’s vampire side comes across as an inner voice inside of him, which he tries to dismiss, most of the time successfully.

There is a good use of description within the novel and the fast pacing swiftly concludes with the inevitable showdown. This ends on a cliff-hanger and I’m looking forward to reading what happens next!

From Friday 1st July to 4th July over 50 authors will be offering nearly 100 free or heavily discounted books. Head over to Support Indie Author’s Website to bag yourself some great reads this holiday weekend! 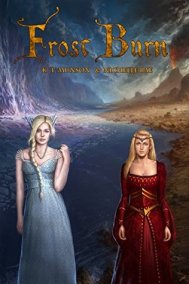 Fire and Frost; no two nations have ever been so divided. Only two bridges across the great River Gora connects them and their long standing hatred. When spring comes early the Frost Nation looks upon the Fire Nation with suspicion. Soon they will discover that the rising rivers, warmer temperatures, and the quakes are all a result of something far more terrifying then each other. When the world seems to turn against them they will only have each other to look to. Can they put their differences aside long enough to fix their planet?

They must or face extinction.

Frost Burn tells the story of two nations who must put their differences aside in order to save their world.

The authors have cleverly developed two very different nations; the Fire Nation and the Frost Nation who have been at odds with each other for many, many years. As a consequence their queens of the past opted to isolate the two countries from each other. Now they find themselves having to work together or face the destruction of both their nations. The world building in Frost Burn is very well-thought out, which creates a very detailed backdrop for the novel to unfold. The characters, both major and minor, are developed, but with room to grow in strength and personality as the story progresses. The politics of the different nations has been addressed in such a way, and the two queens both written sympathetically, so there appears to be no ‘taking sides’ on the part of the reader who can see the entire picture clearly. The healing of the rift between the nations as a whole, as well as the main characters, occurred slowly but naturally and as a consequence the strengthening of the, at first uneasy alliance, was very believable.

I really enjoyed reading Frost Burn. The story evolves at a steady pace that hooked me almost immediately. A great fantasy read, which I wouldn’t hesitate to recommend to anyone who is a fan of the genre!

1. Please tell us a little about yourself?

I’ve lived in Anchorage, Alaska with my family for the past 33 years. I came up with the Air Force, which I separated from in 1991. Since then, I’ve had many different creative and non-creative jobs, including computer programming, project management, IT management, training, magician, comedian, mentalist, and singer-songwriter.