1. Please tell us a little about yourself?
I’m just a girl with a dream, married to the best man in the world and proud mom to 3 dogs.

2. When did you first start writing?
I’ve been writing since childhood but didn’t become serious about it until about 4 years ago.

3. Do you outline your novel before you start writing or do you prefer to just begin and see where your ideas take you?
I’ve still not grasped the concept of outlining. I have a good idea and then as things come up I make notes but mostly I’m a pantser.

END_OF_DOCUMENT_TOKEN_TO_BE_REPLACED 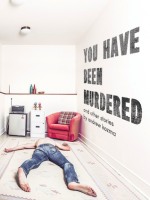 You Have Been Murdered and Other Stories by Andrew Kozma

You Have Been Murdered and Other Stories is a collection of weird, speculative fiction containing four stories dealing with the end of the world, both in terms of the death of the individual soul and the running down of the universe as a whole.

The title story presents a woman who’s been murdered and still has a dinner party to prepare for. In “Teller of Tales,” a young girl must take on the responsibility of being the necessary conscience of her city. “Breach of Contract” describes the plight of an oil man who just wants to insure production quotas, but is roped into saving the world. Lastly, “The Trouble-Men” details what happens when a man trying to survive the end of the world meets up with those who are ending it.

You Have Been Murdered and Other Stories on Goodreads

You Have Been Murdered and Other Stories is a collection of four short and strange stories.

The first ‘You have been murdered’ is my favourite of the tales. It tells the story of a woman who has been murdered and tries to cover up this fact and her denial by still continuing to prepare for a dinner party that she had planned before her death. The author conveys her feelings regarding her death and her anxiety very well and you get a real sense of the pain and confusion that she is going through.

I enjoyed reading the other stories in the collection too, told through the eyes of a variety of different protagonists.

The collection is well-written and the author knows how to build plenty of atmosphere. The twists are surprising and unexpected. A great short read for fans of speculative fiction.

Beyond the Storm by Adam Jones

Man tries to remember his past while Jude tries to forget hers.

Years after the nuclear holocaust decimated Britain, Man wakes up, naked and alone but for the murdered corpses whch surround him. Struggling with amnesia, Man travels the wastes trying to piece together his past.

Across the crumbling remains of the city, Jude flees a depraved fiend, running for her life. Beyond the Storm is a journey of horror and suspense which paints a broken future world and the events that made it that way.

Beyond the Storm is the brutal and disturbing new novel from cult bestselling author, Adam Jones.

Beyond the Storm on Goodreads

Beyond the Storm is a post-apocalyptic thriller set in Bristol, England. It follows the stories of Jude and Man, at first on separate paths and then when they come together. Jude is on the run from a monster who abused her terribly, and Man is suffering from amnesia and has no idea who he is or how the nuclear war almost destroyed the planet.

Whilst I did enjoy reading Beyond the Storm, I did find the description generally in excess and my attention was prone to wander, especially in the first half of the novel, and I felt that perhaps less would have been more in places. However, the second half of the story was more captivating and, eager to find out just who Man was and the fate of the rest of the cast, I found it difficult to put down. The truth about Man I never saw coming and there were plenty of twists that did not fail to disappoint. Beyond the Storm is dark, gritty and certainly not for the faint-hearted!