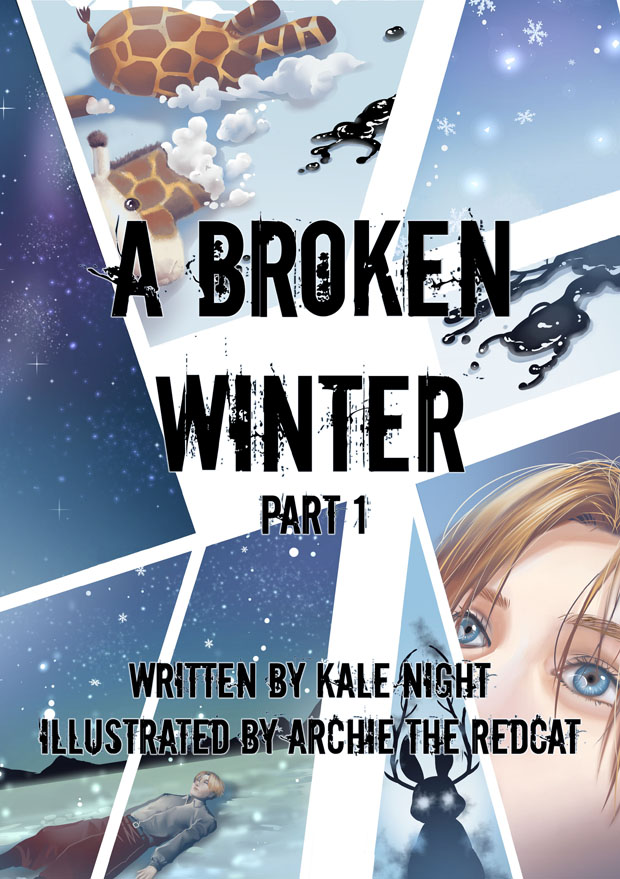 Synopsis: General Auryn Tyrus runs a government slaughterhouse, overseeing the covert execution of political dissidents – victims of an Emperor who claims to have swallowed the sun. When the son of a former lover is sentenced to death, Auryn intervenes, turning his life upside down.

A Broken Winter is a science fiction/fantasy webcomic featuring LGBTQ+ characters. The comic is currently on hiatus but a novelization of the webcomic will be published in June by NineStar Press.

A Broken Winter is written/created by Kale Night.
Part one is illustrated by Archie the RedCat.

END_OF_DOCUMENT_TOKEN_TO_BE_REPLACED

A century ago, a spiteful witch cursed Edmund.

Ever since then, he has lived as an immortal house cat—short one life.

Anselm is a mildly depressed vampire with a soft spot for the feline he calls friend.

They live together as equals, companions for eternity—or so they hope.

But their lives take a dark turn when the witch who cursed Edmund long ago dies.

And suddenly, he is human again.

In a race against time’s cruel hand, Anselm and Edmund must make a decision.

Do they find a dark witch and re-enact the curse that plagued Edmund so they can be together for an eternity? Or . . . does Edmund give up forever as a cat to be with Anselm for now as a man?

END_OF_DOCUMENT_TOKEN_TO_BE_REPLACED

One of the hardest parts for me as an author is saying goodbye to characters. Whether they die on the page or the novel comes to an end, I find it sad and sometimes very difficult. Due to this completing a novel always brings about mixed emotions for me especially when the character has been with me for a long time.

My oldest character is my vampire Taku Kokawa. I originally created him in 2005 as another character’s antagonist/occasional lover and have been writing stories about him since then. So that’s 14 years and the majority of my adult life dedicated to one character. And as silly as it might sound, he’s become a part of me. In some shape or form, Taku is as much a part of my day as my family, friends, cat and work colleagues are. He is always there and it will be really strange when there comes a time that this ends.

So needless to say I am partly dreading the day that I finally complete his story. Of course another part of me is going to be proud of my work and achievement, and will not be able to wait to share my finish novel with everyone. But I’m honestly not going to be surprised if I shed a couple of tears over it too!

As I have mentioned, my sequel to Demon’s Blood is currently with my proof-reader, however this is not the final end that I am referring too. There is another novel in the works and the Demon’s Blood universe is ever expanding as new characters appear to shape and change that world. With this in mind I know that Taku will be with me for a few more years yet. I just wanted to touch on a subject that I know affects many authors and readers, and would love to hear stories of your beloved characters and what they mean to you.

Welcome to another fantastic stop in our World­building Showcase blog hop! On this stop, we’re highlighting a story where the world changes or ends as we know it, but you can find a full list of authors and topics on the OWS Cycon website.
Let’s dive in!

1. Before we dive in to the nitty­gritty, what is the Tinkers World series about?

Starting over doesn’t mean escaping the past.

Over a hundred years before the first book, human society collapsed from the excesses of the twentieth and twenty­first centuries. Two high tech societies have risen from the ashes in the area that is today Ontario by centring on the old hydroelectric plants. Novo Gaia and the United Grid Regions. Novo Gaia runs the tinker program, where they send Doctors of General Applied Technologies, colloquially known as a Tinker, into the Dark Lands, areas without electricity, to help the people bootstrap themselves back to energy abundance through the use of sustainable technologies. Tinkers also supply basic medical, veterinary and other services.

In Tinker’s Plague Brad, a tinker, enters the Dark Lands town of Guelph to find that a plague has been released from an abandon research facility. Brad must deal with the plague while Novo Gaia and the United Grid Regions fight a cold war battle about how much aid to give the afflicted area.

In Tinker’s Sea, Tabby, a tinker working an aquatic tinker’s route on lake Heroin, is tasked with neutralizing a notorious pirate that is marauding over the Great Lakes in a broken ­down nuclear submarine, leaving a trail of radiation and death in their wake.

END_OF_DOCUMENT_TOKEN_TO_BE_REPLACED

As part of the OWS CyCon 2019 virtual book fair I was lucky to receive a copy of author Alexis Lantgen’s science fiction collection Sapience. Here are my thoughts on this excellent anthology.

In the near future, humanity builds a colony on Europa, one of the moons of Jupiter. They tunnel into the ice to explore the dark oceans beneath the moon’s surface, searching for signs of extraterrestrial life. What they find will change them forever, setting humanity on a path to the stars. But the old conflicts and hatreds of Earth are not so easily escaped. Will human colonists on distant planets and moons create a paradise or a horrifying dystopia?

Sapience is a collection of short stories taking place either on Earth or in colonies on other planets. Each story stands alone in its own right, but forms part of the bigger story and themes running through the collection.

I thoroughly enjoyed reading Sapience. It is an excellent dark science fiction anthology, exploring many different themes throughout including the morally questionable direction that science and technology may take humanity in the future. I think what I loved most about the stories was that as dark as they were, there was very often hope amongst the darkness and the characters had resolve to prevail no matter what difficulties they faced. Each one was beautifully written and are the kinds of tales that will stay with you. My favourites from the collection were Earth is for Earthers and Swan.

Sapience is a short yet powerful read which I cannot recommend enough.

I am excited to be taking part in this year’s OWS CyCon which is an online fair for books taking place from 17th-19th May. Please do check out their website for more details and full details of all the authors taking part. You can also find my booth for the fair here.

Over the coming weeks I will be participating in various events and on 18th May between 2pm-3pm EST I will be taking over the Fantasy and Sci-Fi Reader’s Lounge where I will be talking about book three in my Perfect World series.

Today I will be listing My Top 5 science fiction films.

END_OF_DOCUMENT_TOKEN_TO_BE_REPLACED

Heat Rating: 1 flame (A romantic relationship between the couple but no intimate scenes or sexual situations are described in the book. The book fades-to-black before any love scene).

It is Book I of The Disgraced Martyr Trilogy

Dive into the first volume of a bleak cyberpunk tahgmahr you can’t afford to miss. What would you sacrifice to survive?

By 4042 CE, the Hierophant and his Church have risen to political dominance with his cannibalistic army of genetically modified humans: martyrs. In an era when mankind’s intergenerational cold wars against their long-lived predators seem close to running hot, the Holy Family is poised on the verge of complete planetary control. It will take a miracle to save humanity from extinction.

It will also take a miracle to resurrect the wife of 331-year-old General Dominia di Mephitoli, who defects during martyr year 1997 AL in search of Lazarus, the one man rumored to bring life to the dead. With the Hierophant’s Project Black Sun looming over her head, she has little choice but to believe this Lazarus is really all her new friends say he is–assuming he exists at all–and that these companions of hers are really able to help her. From the foulmouthed Japanese prostitute with a few secrets of her own to the outright sapient dog who seems to judge every move, they don’t inspire a lot of confidence, but the General has to take the help she can get.

After all, Dominia is no ordinary martyr. She is THE HIEROPHANT’S DAUGHTER, and her Father won’t let her switch sides without a fight. Not when she still has so much to learn.

The dystopic first entry of an epic cyberpunk trilogy, THE HIEROPHANT’S DAUGHTER is a horror/sci-fi adventure sure to delight and inspire adult readers of all stripes.