Today I’m excited to share with you an excerpt from my new short story Never Change which is being released on Amazon tomorrow!

Each day from the 1st to 25th December the Indie Advent Calendar event will be showcasing works by indie authors. Check out the website each day to find an awesome new read and the chance to win in the daily giveaways!

On 23rd December, my novel Adam will be featured and there will also be a chance to win a paperback copy!

The Razor
By J. Barton Mitchell

Brilliant engineer Marcus Flynn has been sentenced to 11-H37 alongside the galaxy’s most dangerous criminals; a hard labor prison planet better known as the Razor, where life expectancy is short and all roads are dead ends.

At least until the Lost Prophet protocol goes active…

In a few hours, without warning, prison guards and staff are inexplicably evacuated, and the prisoners are all left to die.

To survive, Flynn will have to rely on the most unlikely of allies – killers, assassins, pirates and thieves – each running from (or maybe towards) their own demons.

A volatile ice pirate, struggling with the guilt of losing her entire crew on the inside, and the fear of having it happen all over again. A man who was once an elite prison Ranger, sentenced to the Razor for murdering his commanding officer, and whose sins have finally caught up with him. An infamous and dangerous mercenary, with the mysterious power to affect and feel through metal, who has come to the planet by choice to find the only person he ever cared about him. And a brilliant, mysterious, old woman named Gable, with terrifying abilities no human should possess, and who just may be the most dangerous inmate on the entire planet.

But to escape the Razor, they’ll have to unravel the dark mysteries beginning to awaken on the surface – mysteries that suggest the planet is much more than it seems. Only Flynn has the skills and knowledge to do so, but he can’t make it by himself.

If they can survive each other, they just might survive the Razor…and claim it for their own.

END_OF_DOCUMENT_TOKEN_TO_BE_REPLACED

Title: How We Sell Our Souls

Series: In the Darkness, Book One

END_OF_DOCUMENT_TOKEN_TO_BE_REPLACED

Never Change is now available to pre-order on Amazon!

Thane’s arms curved around his back and he felt the younger vampire trembling as he rested his head on Taku’s shoulder. So easily broken, Taku often forgot what it had been like in the beginning. For him things had been different, he reminded himself. He had already known what it felt like to take a life.

With Nagasaki in the grip of a bitter winter, two vampires struggle to hunt in the challenging conditions. When an opportunity to feed from a dying man presents itself, Taku insists that they take advantage of it. Yet his newly turned lover is left feeling devastated by their actions. Seeing Thane so distraught is more than Taku can bear and so he makes a decision to shield Thane as much as he can from the darker side to their existence. However his desire to protect Thane might one day cost him everything.

Never Change is a short story set in the Demon’s Blood universe.

On 1st December I am releasing a new short story called Never Change and in today’s post I’m going to talk a bit more about it.

Never Change is a short story that I originally wrote in December 2014. Set in the Demon’s Blood universe it can be read either as a stand-alone or as part of the Demon’s Blood story as a whole. It takes place in Nagasaki in winter 1889 which is Taku and Thane’s first winter together. As a newly turned vampire Thane is still struggling with aspects of his new life; mainly having to kill humans for their blood. He is also disturbed by Taku’s pragmatic approach to this. The entire story is written from Taku’s perspective, showing how he is torn between his desire to protect Thane from the harsh realities of their existence and his responsibility as Thane’s sire to teach him how to survive.

Taku refuses to talk about his own past and its effect on him. Haunted by the death of his first lover, Minoru, Taku is afraid that a similar fate may befall Thane. Being abandoned by his own sire deepens the sense of loss and grief that Taku feels. Believing that dwelling on the past only causes pain he’s managed to shut himself off from it and cannot see that even now it influences his every decision concerning his lover.

Thane himself shies away from his vampire nature and desperately tries to hold onto his humanity. Deep down he did not want to become a vampire; he just wanted to save Taku the pain of their eventual parting by his death. His inability to accept what he has become further enforces in Taku’s mind that Thane is too fragile to deal with the realities of their eternal life.

Never Change shows the crucial moment where Taku consciously makes his decision to protect Thane’s gentler nature. Years later during the events of Demon’s Blood Taku is unable to save himself due to this decision, which leaves Thane vulnerable. In Demon’s Blood’s sequel Thane is not only having to find a way to save Taku, but also embrace the vampire side of himself that he rejected so many years ago.

Never Change will be released on 1st December 2018. Also from 1st to 8th December readers will be able to purchase Demon’s Blood for $0.99 on Amazon.com.

Children of the Fifth Sun: Echelon

***SEQUEL TO THE AWARD-WINNING CHILDREN OF THE FIFTH SUN***
SHE THOUGHT THERE WAS NOTHING STRONGER THAN A MOTHER’S BOND. SHE WAS WRONG.

Fifteen thousand years ago, the knowledge bringers—an amphibious, non-humanoid species known as the Huahuqui—came after a great global flood, gifting humans with math, science, and civility.

We killed them all.

Seventy years ago, we found one of their corpses preserved in ice and eventually created a clone named K’in. Our governments fought over the creature, and we killed it, too. Now, a sinkhole in Siberia has opened, revealing new secrets.

Freya Nilsson spent the last five years trying to forget her role in the Huahuqui cloning program. She hid her son, KJ, from the regimes and agencies she believed would exploit him for the powers he acquired through his father’s bond with K’in.

An innocent trip to help KJ understand his abilities results in the conspiracy she fought to bury exploding back to life. Chased by new foes and hounded to put the world first, all Freya can think of is protecting KJ—at all costs.

END_OF_DOCUMENT_TOKEN_TO_BE_REPLACED

The debut psychological-horror novel from author Marty Thornley is a page-turning ride, a front row seat to a clinical trial gone horribly wrong.

For Greg Owens, this was supposed to be a chance to end years of back pain and escape his reliance on pain pills. If it all worked out, he could maybe even get back the life he left behind as the pills took control.

Instead, as the patients are cured of their physical pain, they encounter a different sort of pain building inside them – obsessive thoughts, depression, self-destruction. The side-effects grow worse, and the suspense ratchets tighter. The patients want answers and violent revenge, setting them on a collision course with a crazed doctor, determined to protect his life’s obsession.

What readers are saying…

“…most definitely a recommended read, though it’s probably not the best choice for those with a weak stomach.”

“OMG this book. Holy heck the gruesome descriptions of blood and gore and guts was SO RAD. I found myself cringing and fidgeting and yes, even feeling a bit nauseous in some spots – but totally in a GOOD WAY! Painless was exactly what I wanted in a super-unique, creepy, shocking horror-thriller.”

END_OF_DOCUMENT_TOKEN_TO_BE_REPLACED 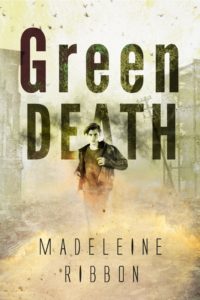 As poisonmaster to the Oligarch, Tryg Sant knows a lot of things others shouldn’t. But when he discovers his family’s darkest secret, his brother tries to kill him.

When Tryg’s lover pushes him out of a helicopter and into the poison-filled Exclusion Zone, Tryg finds himself trapped in a dangerous new world, entirely different from the one he expects. Now, Tryg has to learn to survive nearly-feral humans and his own disintegrating mind. Luckily, he’s found an ally in Riot, one of the victims of the Green Death…