Title: How We Sell Our Souls

Series: In the Darkness, Book One

When George Soto turns twenty-six, his life is less than perfect. Stuck in a dead-end job, watching his friends pass him by, it’s quickly starting to feel like he’s going nowhere. When he finds a strange ritual meant to contract a demon, he doesn’t imagine it could possibly work.

Until there’s a demon standing in his living room.

George doesn’t know what a contract with a demon entails, but it seems like a great opportunity to get revenge on his awful boss. Gradually, he and the demon—an abrasive entity who calls himself Jack—form an alliance.

But as things heat up between them, George almost doesn’t notice the increasing darkness in his life. The nights are longer, the shadows grow heavier, and the world around him seems to be distorting.

How We Sell Our Souls
Emilie Lucadamo © 2018
All Rights Reserved

Bitter alcohol runs down his throat, burning like liquid fire. It’s sheer force of will that keeps George from choking, even though he’s sure what he’s drinking has got to be at least half ethanol, half nail polish remover. He slams the shot glass on the table and sputters, struggling to breathe past the burning in his throat. Tears pool at the corners of his eyes; he blinks them away to the sound of his friends’ raucous laughter.

“One more down the hatch!” Matt exclaims. “Keep this up and you might catch up with us!”

George wipes the tears from his eyes before narrowing them at his friends. He can take a joke as well as the next guy, but after the day he’s had he’d prefer a little sympathy.

“Come on, jerks, quit harping on me just because I got here late.”

“An hour late,” interjects Josh, like this is a point of extreme incredulity. “To your own birthday party.”

George snorts, glancing around at the motley assembly of the three friends who make up his “party”—Matt with his hair mussed, Alex hanging half off his barstool, and Josh slamming another empty shot glass on the table. “You guys are the best I could get for my birthday? Oh man, my life is tragic.”

Josh reaches over and punches him in the arm. It shouldn’t hurt, except Josh sometimes doesn’t realize his own strength, so it hurts a lot. George subtly shifts his numbing arm as he swipes at the other man. Across from him, Matt is laughing again. Maybe it’s the alcohol settling into his veins, or maybe Matt’s laugh is just so damn contagious, but George finds himself grinning back.

He can feel his foul mood fading away, and he’s glad for it. It’s not like getting a mountain of paperwork forced on you by your boss is a weak reason to be pissed off. Still, it’s his damn birthday—he deserves to have a good time.

“Sawyer’s an ass,” Matt says, still snickering as he reaches for a shot of his own. “It’s not like this is a surprise.”

“Still. He had to have known you’d have plans,” Josh pipes up. It’s true; they have an office birthday calendar, and people have been congratulating George on having made it through another year all day long. (Not Sawyer, of course, but George’s jaw would have hit the floor if his boss had.)

Matt slams the shot glass on the table, remaining still for a few seconds as the burn of alcohol fades away. His sharp hiccup dissolves into a round of snickering. The flush on Matt’s face reminds George that his friends have been drinking for a solid hour longer than he has. He finds himself moving to snatch his own shot from the tray before anyone else can get to it. The last thing he wants is to end up the most sober person at his own party.

He tosses back the alcohol and winds up coughing, stunned by the burn of fiery liquid. He’s got no clue what these shots are, but for the way they taste he hopes they cost his friends a small fortune.

“Take it easy,” Alex mutters to Matt, who’s still giggling. “If you pass out, no one’s dragging your sorry ass back home.”

“We’ll just call Lila to come get you,” Josh says with a wicked grin. The threat has the desired sobering effect. Matt blanches and shrinks back into his seat.

“God, no. Last time she chewed me out, I couldn’t stand to look at myself for days. That woman has a way of tearing you down and putting you back together again with nothing but her disapproval and the brute force of your own shame.”

He shudders. George and Josh exchange sly looks, and both lean forward in anticipation. It’s only a few seconds before Matt’s disturbed expression melts into something gentle, and he smirks down at the table. “God, I love her.”

Alex rolls his eyes. George reaches for another shot with one hand, high fiving Josh with the other. “Every time!”

There are several guarantees every time he goes out drinking with his buddies. At some point, he and Josh will get into a drinking competition (“I’m Irish, Soto, you don’t stand a chance,” Josh always says, before being soundly outdrunk by George). Whatever food they order will be thrown around. Two people will get into an argument about something stupid. And Matt will wax poetic about the love of his life, Lila Cooper.

George presses an empty glass to his lips and grins into it. He might be a year older, but some things never change. Even if they’re all getting older now, and it seems like very few things want to stay the way they have always been.

It makes sense, of course. They’re not college students anymore. Alex isn’t top of his class; instead, he’s slaving away behind a desk at a publishing agency. Josh has stopped dreaming of being a journalist and is actually trying to get there. Matt’s doing his damnedest to carve out a life for himself, whether it be clawing his way up at his firm or proposing to his longtime girlfriend. It seems as if everybody’s life is on a rapid collision course with new and better things—the only one staying right where he’s always been is George.

The worst part is, he’s not sure he wants it any other way. Maybe things are better if they don’t change at all. Change is risky—you don’t know what it could bring. After all, he’s happy enough where he is now, right?

Sure he is. His life is great. He doesn’t have anything to complain about, except for his miserable boss. Everything else is fine. It’s goddamn great.

Happy birthday to me, he thinks, before raising his arm to order another round of shots.

Screw Sawyer and his paperwork. Screw his crummy job. Screw being twenty-six and single, his closest friends being his old college buddies, and his useless cat.

Tonight is his party, and he’s going to have a good time if it kills him. 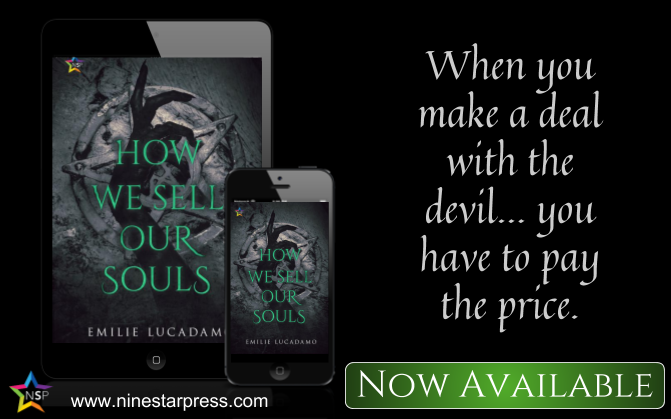 Emilie Lucadamo has too many stories, and not enough words to tell them. At eighteen years old, she has been writing for most of her life, and telling stories even longer. Her dream is to one day become a critically acclaimed author. When not writing, she’s probably reading, or spending quality time with her dog.

One thought on “Book Blitz: How we sell our souls by Emile Lucadamo”