As well as being an avid reader, I am a real film buff and go to the cinema as many times as I can each month. Horror is one of my favourite genres and as today’s Halloween, I thought I would share with you a selection of my favourite horror films.

What’s it about: Earth is invaded by aliens who hunt primarily by sound. A father tries his best to protect his family in a world where making any kind of noise will get you killed.

Shari’s thoughts: Filmed almost most silence, A Quiet Place does an excellent job of building up tension combined with unexpected jump scares.  You will be on the edge of your seat for the entire film.

END_OF_DOCUMENT_TOKEN_TO_BE_REPLACED

One hundred years ago, a sheriff’s posse killed dark warlock Rhyfel Gremory, but his witch-disciples escaped, and their magic made them nearly immortal. To keep their power, each year one of the witch-disciples kills a descendant of one of the men in the posse, a twelve-year cycle that has cost dozens of lives, including that of Seth Tanner’s brother, Jesse.

Seth uncovers the cycle of ritual killings that feeds the power of the witch-disciples, and he’s hell bent on getting vengeance for Jesse and stopping the murders. His fledgling romantic relationship with Evan Malone complicates his mission, but Seth can’t walk away. Seth and Evan are learning to navigate their partnership—as lovers and monster hunters—while they chase the next witch-disciple and avoid attracting the wrong kind of attention.

When the hunt takes Seth and Evan to Pittsburgh on the trail of the next killer, they’ll have to save the intended victim and take down the powerful witch. If the skills they possess and the bond between them isn’t enough, the evil will remain unchallenged, and more people will die…

END_OF_DOCUMENT_TOKEN_TO_BE_REPLACED 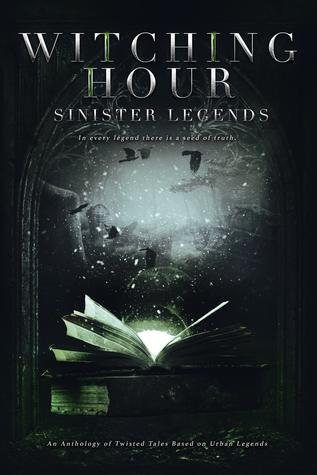 Bloody…maybe we shouldn’t test that just yet.

Urban legends, fact or fiction, at the end of the day they’re all stories. We know not to spin around the room in the dark whispering her name. We’ve heard about the man with the hook and the terror that stalks the babysitter while she’s home alone.

But there are other tales told around the fire at night. The man finding the steps into hell and sanity flickering away. Mind control experiments by governments, big and small. The woman married to the man of peculiar tastes. There are the haunted hospitals, sleep trials in Russia and more.

Slenderman and Bigfoot are nowhere within these stories; these are only the unusual and dark ones, slanted into truth.

In every legend, there is a seed of truth. Welcome to the Witching Hour.

END_OF_DOCUMENT_TOKEN_TO_BE_REPLACED

Tuck is switching dorms. He’s had enough of his roommate’s odd hours, strange behavior, and teasing from his football teammates, who think there’s something more between them. He’s just put the last pad into his duffel bag when the campus goes on lockdown and the police swarm in.

They say that Tuck’s roommate, Sam, is a wanted man, but Tuck knows better. Sam is no criminal; he won’t even let Tuck kill spiders. Tuck takes a risk and helps Sam escape from the clutches of the authorities, and together they try to make it off the campus. As they try to evade the search parties, it becomes clear that they’re after something more than Sam; a secret project Sam’s been working on that has billion-dollar implications.

END_OF_DOCUMENT_TOKEN_TO_BE_REPLACED

Today I’m very excited to share with you all the new side project that I have been working on! Never Change is a short story set in my Demon’s Blood universe. It focuses on Thane’s first winter as a vampire and how he struggles with taking human lives. Never Change will be available to purchase on Amazon Kindle from 1st December 2018! The sequel to Demon’s Blood will be published in 2019.

Thane’s arms curved around his back and he felt the younger vampire trembling as he rested his head on Taku’s shoulder. So easily broken, Taku often forgot what it had been like in the beginning. For him things had been different, he reminded himself. He had already known what it felt like to take a life.

With Nagasaki in the grip of a bitter winter, two vampires struggle to hunt in the challenging conditions. When an opportunity to feed from a dying man presents itself, Taku insists that they take advantage of it. Yet his newly turned lover is left feeling devastated by their actions. Seeing Thane so distraught is more than Taku can bear and so he makes a decision to shield Thane as much as he can from the darker side to their existence. However his desire to protect Thane might one day cost him everything.

Never Change is a short story set in the Demon’s Blood universe.

An alien civilization, observing our planet for thousands of years, has chosen one individual to make its initial contact with the human race. Maybe they chose the wrong human.

The Fi is a written narrative backed up with links to video to take you further into the drama and interaction of its unforgettable characters.

As a favor to her aunt, Alice drives into Arizona’s stark and bleak Sonoran Desert to check up on her cousin who has mysteriously left his job as a chemical engineer in Houston and has moved onto the family’s long abandoned jojoba farm. No one has heard from him in six months. Alice hasn’t seen her cousin in years. She recalls the egotistical socially dysfunctional boy that tormented her throughout her childhood. When she meets him again she finds that not much has changed about his unpleasant personality, but when he begs her to return to videotape a message he desperately needs to share with the world, Alice must make a fateful choice that will affect the rest of her life.

How to read this book
The Fi is available in paperback and e-book. It is written in two styles: narrative and script. The scripted section is bracketed by rows of tiny flying saucers and begins with a heading. If you are reading an e-book, the heading is a link to the video portion of this novel. Click on the heading to get to the video. If you are reading a paperback, beneath each script heading is a QR code and URL address of the Fi website
Either scan the QR code with your smart phone or copy the URL in the address window, not the search window. When the site opens, scroll down a bit until you see “Link to Videos” and click on that link. You will need internet access to view the videos. If you choose not to view the videos or do not have access to the internet, simply read the scripted dialogue between the two main characters as you would if you were reading a play.

When Alice offers to drive out into the middle of nowhere to check up on her unpleasant and reclusive cousin she does it more as a favour to her Aunt than anything. However, when he asks her to return and record for him a message, Alice finds herself drawn into the story of his strange encounter with alien race The Fi. Unsure of whether to believe Dicky’s accounts, Alice is compelled to help him document his tale. But as she learns more about The Fi’s intentions, Alice starts to think that perhaps her cousin is not crazy after all.

The Fi Experiment is an unusual novel in that it is part novel and part video. The author has uploaded the video documentation of Dicky’s encounters with The Fi and these can be viewed in the video format via links or read as a scripted narrative if the reader prefers. The rest of the story is written as a novel from Alice’s point of view.

When I first started reading it I was unsure of how well this would work and I was pleasantly surprised. The format does work really well. The videos linked the rest of the story up nicely and were done extremely well. I thought they might be distracting but this wasn’t the case at all and I thoroughly enjoyed this unique read.

The story itself is short and well-paced. Each of Alice’s visits reveal a little more about The Fi and also rebuild her relationship with her cousin. Dicky’s documentation of The Fi edges between common encounters/abduction stories but with more depth and reasoning behind the events. At the end it is very difficult for Alice to know if what he said was true or not, and the readers are also left to decide this for themselves.

The Fi Experiment is a clever and refreshing new reading experience and I recommend giving it a go!

Murdering a mind reader is no easy task, but this isn’t the first time Gillen has killed. His other victims didn’t mean anything to him, and they definitely didn’t use their dying breaths to copy their minds into Gillen’s head. Now, with no barriers between them, Gillen can’t stop Eduardo from digging up the secrets he’d hoped to take to his grave. He’s scared, powerless, and unprepared to face the fallout of his actions as he flees from both the cops and a group of mysterious pursuers who are as connected to Eduardo as he is.

With his pursuers closing in on him and Eduardo threatening to tear him apart from the inside, Gillen must overcome his self-hatred and take back his mind. If he can’t, he’ll be at the mercy of the man who has every right to want him dead.

END_OF_DOCUMENT_TOKEN_TO_BE_REPLACED

Title: A Dance of Water and Air

Edmund is heir to the throne of Thalassa and a wielder of Water magic. Devoted to his kingdom and his duty to it, Edmund can do nothing but acquiesce to an arranged marriage with the queen of a neighboring kingdom. The marriage and the child it is required to produce will seal an alliance between Thalassa and Aither that is vital to Thalassa’s safety, and far more important than Edmund’s personal misgivings.

Arden is the younger brother of Aither’s queen and a wielder of Air magic. Raised in the politics of the court to support his sister’s rule, he understands the alliance is important to Aither, even as he worries about his sister marrying someone she’s never met. When Edmund arrives in Aither to prepare for the wedding, Arden is tasked with helping him settle in at court. As they spend more time together, Edmund and Arden develop a close friendship, then stronger feelings, but with Edmund’s wedding approaching, they must hide their feelings, even from themselves.

When someone tries to assassinate the queen, Edmund is blamed, and Arden rescues him before he can be executed for a crime he didn’t commit. To prevent a war between their kingdoms and protect them from a dangerous enemy, Edmund and Arden will have to discover who wants to pit Aither and Thalassa against each other and mend relations between the two kingdoms as they evade those searching for them—all while finding a way to be together.