They came as saviors to a deteriorating Earth.

Julip Thorne questions whether there is more to life beyond the barren dirt, acidic seas, and toxstorms her people work and die in. Living in poverty on the withering Greenland Human Reservation, she wonders if the alien Mezna goddesses are truly as holy as the temple preaches. Julip begins to dig deeper into the history of the planet and her leaders’ rise to power. But nothing can prepare her for the atrocities she uncovers.

Meanwhile, Jakkattu prisoner Sabaal suffers constant torture and heinous medical experiments as her Mezna-priest captors seek to unlock the key to her genetic makeup. Escaping from captivity, she finds herself suddenly alone on the hostile alien planet of Earth. To survive, she’s forced to work with the same Mezna-human hybrids she’s loathed her entire life, but the more they work together, the more they realize that their enemy is the same.

When humans and Mezna collide, will Sabaal turn out to be the genetic vector the Mezna have been searching for all along, or will she spark the flame that sets a revolution ablaze?

The Jakkatu Vector on Goodreads

Julip Thorne is a young woman living in the Greenland Human Reservation. Her life seems to have been mapped out for her since birth as it is for all humans born in the Reservation. However, Julip is not content to accept the Mezna as gods and seeks to discover the truth, even at great cost.

For years Sabaal has endured torture at the hands of her god-like captors until one day she is able to escape her prison. On the run she finds unexpected allies in half-robot teks and mezna-human hybrids. Eventually she finds herself on Earth and must use all her survival skills to not only protect herself but also a new born baby.

This is a very well written novel and a good start to the series. There is plenty of action to straightaway draw the reader into the two different worlds. I loved Sabaal’s character from the start. She’s tough, does what is necessary yet there is a softer side to her that comes out as the novel progresses. Even after all she has been through with help from her allies she is still able to show compassion and empathy. Julip I found difficult to relate to although I think this had a lot to do with the dialogue in her parts. I found it hard to follow at times and so her sections of the novel were rather frustrating for me. I did persevere with it and the finale did not disappoint. I would definitely read book 2 but as I found it a bit of a struggle to follow in places I can only give it 3.5 stars.

Over the late August bank holiday weekend I visited my local cat rescue centre and adopted a new friend. Her name at the centre was Matash because of her little white moustache, but I’ve shortened it to Tash. She was a bit nervous at first but soon settled in just fine. The centre think she’s about 5 years old. She’s very friendly and a little greedy! And she already follows me everywhere, and loves exploring and playing! 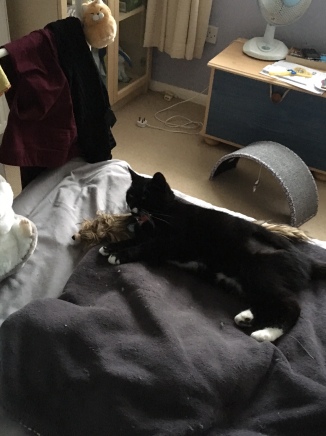 Corentin is a scholar with a secret—his magical Talent allows him to turn into a dragon, and he isn’t alone in that ability. Long ago, dragons were hunted fiercely, until they went into hiding, becoming things of legend. Corentin has traveled the world with one aim—to protect his people and keep their secret safe. Drawn to the principality of Tournai by news of someone close to discovering that secret, he hopes to avert suspicion. His attraction to the too-serious Bastien isn’t convenient for his purpose, but it isn’t something he can ignore either.

Lord Bastien, Earl of Ardesia, inherited his title unexpectedly when his parents were killed in a sailing accident along with the parents of his cousin, Prince Philip. Since then, Bastien has devoted his life to the obligations of his family and estate—so much so, that it has caused tension between him and his siblings. His world is further shaken when he receives an anonymous letter informing him that the tragic boating accident may, in fact, have been murder. Bastien throws himself into investigating whether the allegations are true and finding out who killed his parents.

As Corentin and Bastien become closer, the mystery of Bastien’s parents’ death draws him further into danger. Corentin feels compelled to protect Bastien, but the threat is closer than they know. Now, Corentin must decide whether preserving his secret—and potentially his people’s safety—is more important than saving the man he loves.

END_OF_DOCUMENT_TOKEN_TO_BE_REPLACED

During the last few months I’ve received many messages asking me when book 2 in my Perfect World series will be released and also the sequel to my vampire novel Demon’s Blood. As well as responding to these messages privately, I would now also like the post this update.

Firstly I would like to apologise to all my readers who are eagerly awaiting the next novels.  I feel terrible that so much time has elapsed since Demon’s Blood and Adam were released. It was never my intention to leave such a long gap between publishing. There have been several events in my personal life that have significantly impacted on my writing and I have been unable to work on my novels as much as I would have liked to. Now thankfully things are on the up and I have been able to pick up both novels again.

I’m not in a position to talk about potential release dates yet but I am writing at every available opportunity and hope to be able to give some more detailed updates in the next couple of months.

Thank you all for your continued patience and support. I’ll do my very best to make sure that you’re not kept waiting too much longer!