Tuck is switching dorms. He’s had enough of his roommate’s odd hours, strange behavior, and teasing from his football teammates, who think there’s something more between them. He’s just put the last pad into his duffel bag when the campus goes on lockdown and the police swarm in.

They say that Tuck’s roommate, Sam, is a wanted man, but Tuck knows better. Sam is no criminal; he won’t even let Tuck kill spiders. Tuck takes a risk and helps Sam escape from the clutches of the authorities, and together they try to make it off the campus. As they try to evade the search parties, it becomes clear that they’re after something more than Sam; a secret project Sam’s been working on that has billion-dollar implications.

When humans lacked knowledge, they made do with having faith. Our ancestors ventured into the uncharted wilderness, armed only with pointed sticks and confidence that they could fight off anything with pointed teeth. Generations later, someone made a gamble that if a plant grew where it fell, then it should grow where it was planted and be just as edible, thus giving birth to agriculture. The age of exploration dawned when the first mariners set sail for the horizon, fairly certain it wasn’t a waterfall. As history progressed, people attempted more daring and complex endeavors, fueled by the belief that they would, at the very least, survive. Knowledge may be the substance of progress, but faith is the duct tape.

More than anything else, we have, as a species, progressed because of our faith in each other. Our ancestors hunted in packs to bring down larger prey, trusting that the guy they were hunting with wouldn’t kill them so they didn’t have to share. Legal systems were constructed on the premise that enough people would obey the law that sorting out the remainder wouldn’t be a problem. Civilization is built on the basic philosophy that people will be good to each other, people will help each other, and people won’t kill each other when it suits their interests, not usually at any rate.

Unfortunately, faith has a dark side. Wars have been started because one side believed they could win. The different religions of the world have been in an ongoing disagreement about who’s going to heaven and why; sometimes these disagreements have escalated to the point where they found out the hard way. People have murdered, pillaged, and swindled when they thought they could get away with it. Careless hearts have fallen in love with uncaring people.

It was in the early evening in one fair city, the power of faith was being abused to its breaking point as a group of UFO researchers was convening on the rooftop of a warehouse. On the spacious tar flats high above the city, with a few of the more ambitious stars already visible in the failing light of dusk, men and women set up a complex array of antennae and computers. The less technically minded among them set up a craft services table featuring on-theme menu items like Cattle-Mutilation-Sloppy-Joes and Little-Green-Men-Guacamole.

They were motivated by a bone-deep belief that if they set up their mobile receiving station at just the right time and listened carefully, they would win the electrodynamic lottery and hear a broadcast from an alien world. Tonight, their faith was rewarded by a brief jolt of excitement, followed by a slow stab of inevitable disappointment.

“Oh, lordy!” cried Calvin, looking at the monitor, where the interface displayed a wildly jiggling radio wave. “This is it! We’re receiving a signal!” He reached over to a different machine and flipped some switches with well-practiced speed.

“We’re recording!” he announced, pressing is face up against the screen to make absolutely sure he wasn’t missing anything. “Oh, lordy! This is incredible!”

Susie walked over, shaking her head in exasperation.

“Are you sure it’s extraterrestrial?” she asked, trying to get a view of the graph from around Calvin’s head.

“It’s just that you were sure last month,” she said. “When you spent four hours recording a Finnish talk show.”

“This is different!” he protested.

“And the week before that, when you followed a UFO with your car.”

“This is completely different!”

“And you followed it to the state line before you realized it was a crack in your windshield,” she finished.

“This is…ow, ow, ow,” he cried, as an older, bulky man pulled gently but firmly on the tuft of hair on Calvin’s temple, prying his face away from the monitor.

The newcomer surveyed the image for a second before a look of disappointment settled on his grizzled face.

“Is it extraterrestrial, Moe?” Susie asked, a faint note of hope in her voice.

“Nah, that’s terrestrial,” Moe said finally. “I saw it before, when I was in the Air Force.”

“I keep telling you, I was stationed in Britain.”

“Because they’re trying to cover something up!” declared Calvin.

“Or some jamoke is trying to keep people from using cell phones in his store,” said Moe. “But keep recording,” he added, before walking away. “This night won’t be a total loss if we can document a felony.”

But this story isn’t about them. It just occurs near them. This story is about faith. The faith one man had in another, what that faith led him to do, and how that faith changed the person it was bestowed upon. 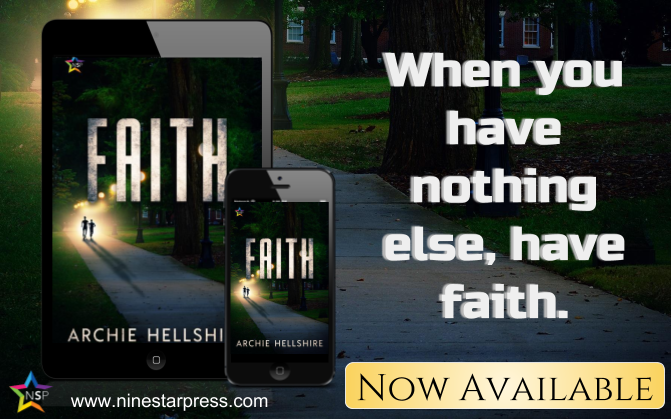 Archie Hellshire is an author with aspirations of being able to write. He was born in the Caribbean where he developed a love of nature, the metric system, and high temperatures. In school, lacking any athletic or social ability, he became a very bookish person, indulging in the works of Douglas Adams, Terry Pratchett, JK Rowling, and Charles Dodgson. Despite being well read, he struggled with dyslexia and would forever remain horrible at spelling. The advent of Spell Checker reignited his dreams of becoming an author.

Archie grew up in a family and culture that was not tolerant of homosexuals, and he spent his entire young life in the closet, retreating into his books and a rich fantasy life. In the theater of his mind, the romances he read could be edited to be male couples. He dreamed of one day writing his own stories and living his own happy ending. You can connect with Archie on Twitter.

Feeling unsettled by his roommate’s odd hours and behaviour, as well as his own developing feelings, Tuck decides to switch rooms. But just as he’s leaving he finds the college campus going into lockdown and the police are on the hunt for his roommate Sam. Despite him wanting to leave, his feelings for Sam mean that Tuck quickly finds himself on the run; trying to protect Sam and the secret project that he has been working on.

Faith is the second book in the Graphene series but you can read this as a standalone without needing to have read book one.

I really liked the premise of this book and as far as the action went it did not disappoint. It was fast-moving and began right from the beginning. There were also some flashback scenes that gave some insight into the two main characters friendship which helped lay the foundations amongst a quick series of events.

What let it down for me was the characters themselves. I felt that they could have been better developed. They seemed quite childish in places and didn’t really act their years. I also had trouble understanding where Tuck was coming from. He seemed to have grown fed up with looking after Sam but suddenly he had feelings for him. It just seemed too much of a backtrack on his behalf to seem genuine which was a shame as Sam’s feelings for Tuck were very honest and sweet.

This is a short, fun, action-packed read but if you’re looking for more of a developed relationship between the two leading men then this may not be the book for you.