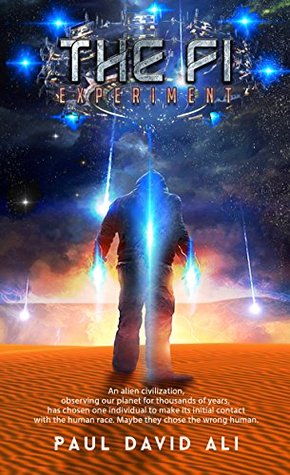 An alien civilization, observing our planet for thousands of years, has chosen one individual to make its initial contact with the human race. Maybe they chose the wrong human.

The Fi is a written narrative backed up with links to video to take you further into the drama and interaction of its unforgettable characters.

As a favor to her aunt, Alice drives into Arizona’s stark and bleak Sonoran Desert to check up on her cousin who has mysteriously left his job as a chemical engineer in Houston and has moved onto the family’s long abandoned jojoba farm. No one has heard from him in six months. Alice hasn’t seen her cousin in years. She recalls the egotistical socially dysfunctional boy that tormented her throughout her childhood. When she meets him again she finds that not much has changed about his unpleasant personality, but when he begs her to return to videotape a message he desperately needs to share with the world, Alice must make a fateful choice that will affect the rest of her life.

How to read this book
The Fi is available in paperback and e-book. It is written in two styles: narrative and script. The scripted section is bracketed by rows of tiny flying saucers and begins with a heading. If you are reading an e-book, the heading is a link to the video portion of this novel. Click on the heading to get to the video. If you are reading a paperback, beneath each script heading is a QR code and URL address of the Fi website
Either scan the QR code with your smart phone or copy the URL in the address window, not the search window. When the site opens, scroll down a bit until you see “Link to Videos” and click on that link. You will need internet access to view the videos. If you choose not to view the videos or do not have access to the internet, simply read the scripted dialogue between the two main characters as you would if you were reading a play.

When Alice offers to drive out into the middle of nowhere to check up on her unpleasant and reclusive cousin she does it more as a favour to her Aunt than anything. However, when he asks her to return and record for him a message, Alice finds herself drawn into the story of his strange encounter with alien race The Fi. Unsure of whether to believe Dicky’s accounts, Alice is compelled to help him document his tale. But as she learns more about The Fi’s intentions, Alice starts to think that perhaps her cousin is not crazy after all.

The Fi Experiment is an unusual novel in that it is part novel and part video. The author has uploaded the video documentation of Dicky’s encounters with The Fi and these can be viewed in the video format via links or read as a scripted narrative if the reader prefers. The rest of the story is written as a novel from Alice’s point of view.

When I first started reading it I was unsure of how well this would work and I was pleasantly surprised. The format does work really well. The videos linked the rest of the story up nicely and were done extremely well. I thought they might be distracting but this wasn’t the case at all and I thoroughly enjoyed this unique read.

The story itself is short and well-paced. Each of Alice’s visits reveal a little more about The Fi and also rebuild her relationship with her cousin. Dicky’s documentation of The Fi edges between common encounters/abduction stories but with more depth and reasoning behind the events. At the end it is very difficult for Alice to know if what he said was true or not, and the readers are also left to decide this for themselves.

The Fi Experiment is a clever and refreshing new reading experience and I recommend giving it a go!

One thought on “Review: The Fi Experiment by Paul David Ali”