Welcome to another fantastic stop in our World­building Showcase blog hop! On this stop, we’re highlighting a story where the world changes or ends as we know it, but you can find a full list of authors and topics on the OWS Cycon website.
Let’s dive in!

1. Before we dive in to the nitty­gritty, what is the Tinkers World series about?

Starting over doesn’t mean escaping the past.

Over a hundred years before the first book, human society collapsed from the excesses of the twentieth and twenty­first centuries. Two high tech societies have risen from the ashes in the area that is today Ontario by centring on the old hydroelectric plants. Novo Gaia and the United Grid Regions. Novo Gaia runs the tinker program, where they send Doctors of General Applied Technologies, colloquially known as a Tinker, into the Dark Lands, areas without electricity, to help the people bootstrap themselves back to energy abundance through the use of sustainable technologies. Tinkers also supply basic medical, veterinary and other services.

In Tinker’s Plague Brad, a tinker, enters the Dark Lands town of Guelph to find that a plague has been released from an abandon research facility. Brad must deal with the plague while Novo Gaia and the United Grid Regions fight a cold war battle about how much aid to give the afflicted area.

In Tinker’s Sea, Tabby, a tinker working an aquatic tinker’s route on lake Heroin, is tasked with neutralizing a notorious pirate that is marauding over the Great Lakes in a broken ­down nuclear submarine, leaving a trail of radiation and death in their wake.

END_OF_DOCUMENT_TOKEN_TO_BE_REPLACED

As part of the OWS CyCon 2019 virtual book fair I was lucky to receive a copy of author Alexis Lantgen’s science fiction collection Sapience. Here are my thoughts on this excellent anthology. 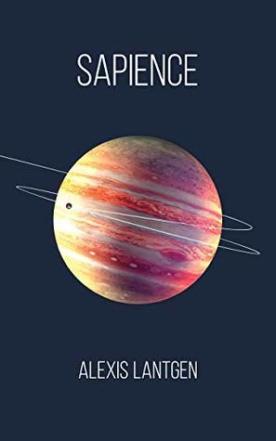 In the near future, humanity builds a colony on Europa, one of the moons of Jupiter. They tunnel into the ice to explore the dark oceans beneath the moon’s surface, searching for signs of extraterrestrial life. What they find will change them forever, setting humanity on a path to the stars. But the old conflicts and hatreds of Earth are not so easily escaped. Will human colonists on distant planets and moons create a paradise or a horrifying dystopia?

Sapience is a collection of short stories taking place either on Earth or in colonies on other planets. Each story stands alone in its own right, but forms part of the bigger story and themes running through the collection.

I thoroughly enjoyed reading Sapience. It is an excellent dark science fiction anthology, exploring many different themes throughout including the morally questionable direction that science and technology may take humanity in the future. I think what I loved most about the stories was that as dark as they were, there was very often hope amongst the darkness and the characters had resolve to prevail no matter what difficulties they faced. Each one was beautifully written and are the kinds of tales that will stay with you. My favourites from the collection were Earth is for Earthers and Swan.

Sapience is a short yet powerful read which I cannot recommend enough.

I am excited to be taking part in this year’s OWS CyCon which is an online fair for books taking place from 17th-19th May. Please do check out their website for more details and full details of all the authors taking part. You can also find my booth for the fair here.

Over the coming weeks I will be participating in various events and on 18th May between 2pm-3pm EST I will be taking over the Fantasy and Sci-Fi Reader’s Lounge where I will be talking about book three in my Perfect World series.

Today I will be listing My Top 5 science fiction films.