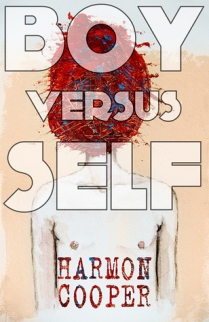 Boy Versus Self by Harmon Cooper

There are moments when a creation pushes its creator to the brink of their imagination, to the fine line between true ingenuity and blistering insanity. Boy is such an artist, an artist who can’t seem to shake the demon he has himself created – Glass Wings. With his career taking off, will Boy overcome the darkness within? Will he reconcile with his family, his sister, his demons? And the people surrounding him – his erotic novelist girlfriend with violent night terrors, his drug dealer friend, the married Irish woman who brings him to New York, the mysterious Japanese man financing his art – where do they fit in all this? Will he ever be able to tell them the truth?

A serrated existence that runs from Texas to Mexico, New York to Tokyo, BOY Versus SELF is a disquieting journey into the mind of a penniless artist as he struggles with shocking hallucinations that could kill him. The novel is a psychological coming of age story full of suspense, horror, struggle and ultimately, triumph.

True fear is easily created and rarely destroyed. True art is always the opposite.

Goodread Link: Boy Versus Self

Boy Versus Self is a part psychological horror, part paranormal novel. The protagonist, known only throughout the novel as Boy, is an artist who is tormented by visions of ghosts and a terrifying monster whom he calls Glass Wings. Glass Wings first appears as an apparition devouring his sister’s glass collection, but as the novel progresses Boy is continuously haunted by its presence.

Boy Versus Self is a very original and cleverly developed novel. The main character and those supporting characters who are closest to him are referred to only as Boy, and Mom, Girl (his sister) and Friend. Not knowing the real names of the characters isn’t really that critical and the lack of them actually adds to the atmosphere and tone of the story. Told entirely through Boy’s eyes you get a real sense of his struggle against his visions and also his real life problems to do with his family and relationship.

I really enjoyed reading Boy Versus Self. It is a very unique, compelling and dark read. The ending is left open, but not frustratingly so, and I highly recommend Boy Versus Self to lovers of horror and paranormal novels. 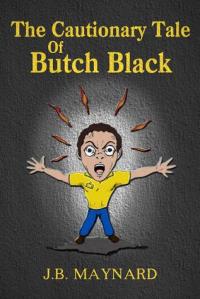 The Cautionary Tale of Butch Black by J.B Maynard

Enter the Black Diary: A cursed book so evil that it writes itself. The Cautionary Tale Of Butch Black chronicles the last two hundred and thirty six days of a madman, through the pages of this tome. Butch is a retail slave, trapped in his own life. His flights of fancy send him into the heart of the evil corporation known as World-Mart, on a daily basis. Faced with termination, he must expose, and try to take down, the company that has imprisoned him for the last ten years! Are the demons surrounding Butch mere delusion or terrible truth? Join Butch Black as he faces an army of reticulated, rampaging robots; ravenous, talking rats; and devious demons by the dozen.

The Cautionary Tale of Butch Black on Goodreads

The Cautionary Tale of Butch Black is a diary-style novel telling of World Mart employee Butch Black’s descent into madness after ten years of loyal service in a job that isn’t really going anywhere fast.

I really enjoyed this story and J.B Maynard’s style of writing. Butch’s documented descent is an intriguing read as you try to decide whether he has uncovered the terrifying truth about the company he works for or if the repetitive and monotonous years have finally taken their toll.

This is a quick read filled with amusing one liners and observations about life and I look forward to the next instalment, Black Wonderland.