This week’s Featured Author on the Goodreads Paranormal, Fantasy, Dystopia and Romance Readers, Writers and Reviewers is Eva Gordon.

About Eva Gordon
I write fantasy and paranormal novels with a strong romantic element. I love to create stories that combine my passion for mythology, romance and werewolf lore. I also write steampunk and Victorian era historical and alternative novels.

Apocalyptic Moon is book 1 in my After the Bane series (paranormal romance/zombie apocalypse) Released May 2013 by The Wild Rose Press. Book 2, Raven Moon will be released 2014 and late December 2013 on kindle select.

The Stone of the Tenth Realm, my epic fantasy backlist novel will be revised and released in the near future.

I have a BS in Zoology and graduate studies in Biology. I have taught high school Biology, Environmental Science and Anatomy/Physiology. When not in my den writing, I enjoy world travel, steampunk conventions, hiking, raptor rehabilitation and wolf sanctuaries.

I also teach online workshops on wolf lore ancient falconry and animal lore for Romance Writers of America and other writer groups. If you are interested in my workshops, please contact me. 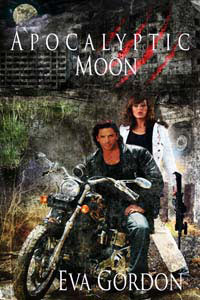 Apocalyptic Moon (After the Bane #1)

Dr. Dora Adler’s life has been in disarray since the beginning of the zombie apocalypse, but when she gets bitten by one of the undead, her whole world is turned upside down. Held captive in a secret underground lab, the tall, muscular hunk in the next cell is her only hope for salvation. Unfortunately, he claims to be a werewolf. Yeah, and she’s supposedly a witch.

Dirk Gunderson is an alpha Arbor pack werewolf. Captured and collared, he’s sold to the zombie lab in hopes his blood serum can create a vaccine. He needs to escape, but not without the hot little brunette witch.

In the midst of enemy werewolves and the hordes of undead, Dirk and Dora’s sexual tension ignites a blaze hotter than the desert highway. Along their journey, they battle the inevitable: a werewolf must never take a witch as a mate.