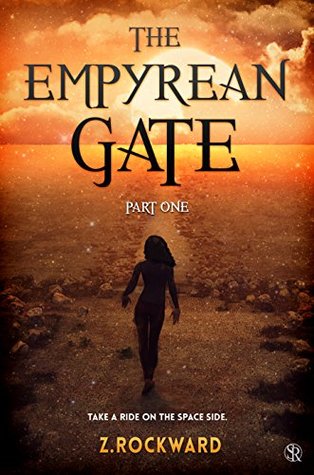 In space, no one can fill your awkward silences for you…

At the turn of the 23rd century, Liam Boyer’s parents led the construction of the Empyrean Gate, an intergalactic spaceway to an advanced civilization with the technology to fix Earth’s environmental crisis. But when an extremist named Kin sabotages the Gate on opening day, he tears apart the two worlds—and Liam’s family. In the three decades since then, Liam has dedicated his life to bringing Kin to justice and seeing the Gate rebuilt.

Yona Kabul works on one of Earth’s trash satellites, assigned to salvage and recycle anything she can from the landfill before it’s fed to the sun to be disposed of forever. Just before her satellite’s suncineration, Liam arrives in pursuit of Kin, who has come to dig up a long lost weapon with the intent of using it to destroy the Gate once and for all.

When Yona is recruited to work with Liam, he has no intention of letting her slow him down. But the more she proves herself, the more he begins to see her value, in more ways than one. Soon they find themselves on a path with unpredictable twists, dangerous turns of the heart, and unimaginable stakes. Can they stop Kin before he shuts the door between the two worlds forever and dooms Earth to environmental disaster?

Liam fought back up, thrashing as a cord tightened around his arm. He slipped out his limb in time and climbed through the landslide to the mouth of the cave, closing before him. He managed to clear the rubble when his leg jerked back. A vine of cables coiled around his knee and up his thigh, while a layer of netting reached around his other foot, pulling him under like a monster swallowing its prey.

He tried to claw his way out but a wave of debris came over him. The pressure bore down on his physical armor, his last line of defense as his forcefield flickered out. He fought to take a breath, gasping against the crushing of his chest. A plastic sheet unfolded above him like the wings of a suffocating angel. The pit collapsed in a slow fold above him, obscuring his view of the stars.

He couldn’t die here. Not now. Not yet.

A woman shot out from behind the plastic sheet, shredding it with a bright laser machete. She slung aside clumps of plastic and sliced through the web tangling him.

She extended her hand to him. “Come on!”

Liam grabbed her hand and she fired the boosters on her boots to hoist him up. They whipped back, dregs of plastic clinging to his armor.

He hesitated. Her gaze was bright but steady under her helmet, her eyes hot pink. She was as if from another world. On a fantastical whim his mind wondered if she was an Empyr, somehow on this side of the universe—but he knew that wasn’t possible. She could only be human, and her request was inconceivable.

He kicked his feet, his limbs straining with the pull. “I’ll get torn apart!”

“You won’t make it out otherwise.” She tightened her grip. “Trust me on this. I’ve got you.”

He was now pulling her down with him, but she held on, steady and strong. She’d taken the risk to follow him down here, into the jowls of death. He realized that if he could trust anyone, he could trust her in this moment.

He released his armor, keeping his helmet but shedding the rest like molted skin. She pulled him free as the plastic crushed and swallowed the human-shaped shell he’d left behind. They vaulted above the crest of plastic, the pit stretching below them, an irregular, jagged landscape alive with agitated hunger.

They cleared the perimeter and descended near a hoverbike, the woman setting him delicately on his feet before landing herself. Her helmet unfolded into her collar, revealing a bun of purple hair atop her head.

“Second rule of the plastic pit,” she said, guessing his thoughts. “Always park out of its reach.”

His contacts scanned her face and identified her as Yona Kabul, the steward assigned to this satellite.

Liam retracted his helmet. He brushed away the bits of plastic stuck to his person. She was untouched.

“What’s the first rule?” he asked. 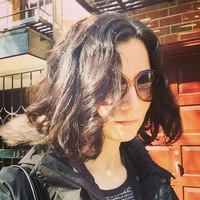 Z lives in the wild west and marvels at the weather every day. She likes pole dancing, drawing, and feminism. She tries to avoid cliches but sometimes can’t resist.