Blythe Sol has a New Year’s Resolution, but it’s not your typical self-improvement plan. She wants to end the conflict between the government and the Resistance once and for all—by sneaking into Washington D.C. and putting a bullet in President Drummond’s skull. If she can cut the head off the snake, the genocide of the Bionics might finally end. But if she fails, she will surely bring retaliation crushing down upon the entire Resistance.

Blythe and fellow soldier Dax Janner are already coping with the loss of people they loved. When their dormant feelings for each other begin to rekindle, they struggle with feeling anything positive after so much suffering. The return of Gage will only confuse matters more. As the terrorist sect known as The Rejects begins to work hand in hand with the government to push the Resistance toward all-out war, the battle will be brought to their doorstep. Will the movement stand tall and conquer—or collapse under the strain and be destroyed for good?

The Revolution is the thrilling third novel in the award-winning Bionics series by Alicia Michaels. 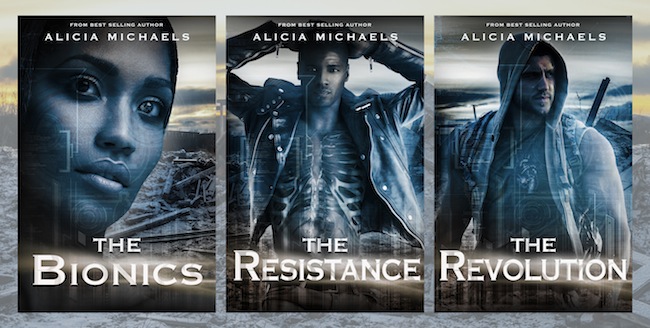 Grab book 1 – The Bionics for FREE!

Swallowing the bile rising in the back of my throat, I close my human eye again and zoom in through the scope. I move the rifle until the crosshairs rest over Drummond’s forehead.

Disbelief drops my jaw, but I don’t take my eyes off the president. “What? Why the hell not?”

My palms break out in a sweat, and Drummond’s voice fades to an unintelligible warble as my blood begins to rush so fast I can hear it roaring in my ears. Dax is right … but Drummond is in my sights. The man who destroyed our lives and killed my family. The man who murdered Yasmine and threatened to come for the rest of us.

“I have to,” I whisper, curling my finger around the trigger once more, shaking my head to clear it. “We came all this way.”

“Undetected,” Dax argues. “We can leave the same way. It’s not too late.”

“We’ll find another way,” he insists, his hand now on my shoulder. “A way that doesn’t make us look like the terrorists he’s making us out to be.”

I jerk away from his hold and refocus through the scope. “You can only treat someone like shit for so long before they snap. You can’t keep backing people into a corner without expecting them to eventually come out swinging. Drummond wants me to be a terrorist? Fine … I’ll earn my fucking spot on the FBI’s Most Wanted list. I’m taking the goddamn shot.”

Dax whispers a string of curses under his breath, but he doesn’t physically try to stop me. He doesn’t touch me again. I think it’s because, deep down, he wants to see this fucker pay for what he did to Yasmine. He wants to see Drummond fall, even though he knows the consequences we’ll face for it.

I zoom in a little closer … so close it feels like I’m staring directly into his cold, dead eyes. Spittle gathers in the corners of his mouth as he gets really riled up, waving his hands and pointing as he raises his voice to rally the crowd to his side. All around the world, people are buying into this … believing every poisonous word that comes from his mouth.

It’s time to silence him once and for all.

Taking another deep breath, I hold it as I prepare for my moment of truth. I see my father falling to the ground with a bullet in his skull … my mother sobbing hysterically as Skyye’s insides paint our front lawn red. And the hot rage in my veins goes cold like ice, freezing there as the entire world around me goes still.

As I exhale, my finger squeezes the trigger. 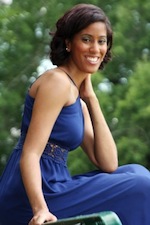 Ever since she first read books like Chronicles of Narnia or Goosebumps, Alicia has been a lover of mind-bending fiction. Wherever imagination takes her, she is more than happy to call that place her home. With several Fantasy and Science Fiction titles under her belt, Alicia strives to write multicultural characters and stories that touch the heart. V-Card, the first book of the Sharing Spaces series, was her first Contemporary Romance.

The mother of three and wife to a soldier, she loves chocolate, coffee, and of course good books. When not writing, you can usually find her with her nose in a book, shopping for shoes and fabulous jewelry, or spending time with her loving family.