Shabby Sunday is a meme started by Mischenko of ReadRantRock&Roll and credit also goes to her for the banner above. 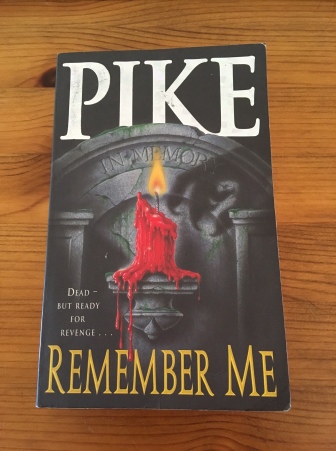 If, like me, you’re a child of the 90s you would have most likely read some of Christopher Pike’s young adult novels. I also read a lot of Point Horrors, but Pike’s novels were always my favourites due to the more adult tone and themes running throughout each of his works. Remember Me was, and still is, my favourite and the novel that left the most lasting impression on me. 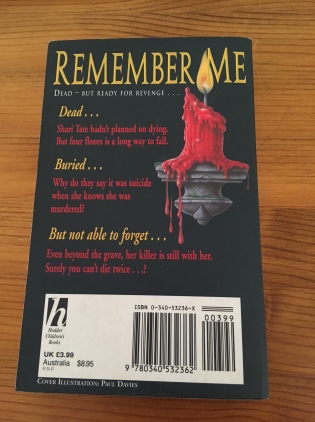 Remember Me tells the story of 17 year old Shari Cooper (the error on my edition incorrectly gives her surname as Tate) who at the end of a party falls four floors to her death. The story is told completely from Shari’s POV as she not only struggles to come to terms with her death but discovers that everyone thinks that she committed suicide.

This novel is pretty deep and addresses the question ‘what happens when we die’ head-on with a rawness that is full of emotion and you cannot help but feel a great empathy with Shari. Despite her circumstances she remains a strong character with a unique sense of humour which she still manages to bring into her situation. Having reconnected with her old flame Peter, who died several years earlier, they set about trying to prove that she was murdered and find the killer. Knowing that it must have been one of her friends who was at the party that night, Shari is forced to see them all in a new light and learn things about them, and herself, that she might have rather not known.

As I mentioned earlier, Shari’s story was one that has stayed with me ever since I first picked up my copy of Remember Me. The fact that we share the same first and middle name is not a coincidence. I chose to change my name when I was eighteen and Shari Ann (although Ann is also my mother’s middle name which was the main reason I chose that) was a natural choice for me.

If you haven’t read Remember Me and want to check it out it has been reprinted many times since it was first published. Its currently available on amazon.com/amazon.co.uk. This edition comes with the sequels, which in my opinion did sadly detract more than add to the original novel but are still definitely worth a read.

2 thoughts on “Shabby Sunday: Remember Me by Christopher Pike”