Book Title: The Stars May Rise and Fall

Teru came to Tokyo with dreams of making it big in the glam-metal visual kei scene, but three years later, all he has to show for it is a head of hot pink hair and some skill with an eyeliner pencil. He may look the part, but he doesn’t sound it, and constant bickering among his bandmates has him worried about his future. When he finds a mysterious business card in his bag, he’s willing to take any help he can get.

Help comes in the form of Rei, a crippled, disfigured composer whose own career was ended by an accident before it had really begun. With Teru’s voice and looks, and Rei’s money and songwriting skills, both of their dreams seem about to come true – but a forbidden kiss and a late-night confession threaten to tear it all apart. Now Teru, who has spent most of his life denying his attraction to men, and Rei, who vowed long ago never to love again, must reconcile their feelings with their careers – and with their carefully constructed ideas of themselves.

THE STARS MAY RISE AND FALL is an M/M retelling of Phantom of the Opera, set in Tokyo at the turn of the millennium. It comes with a healthy dose of angst and a dollop of nostalgia, as well as an age-difference romance, a physically disabled love interest, and memorable characters who will stay with you long after the pages are closed. 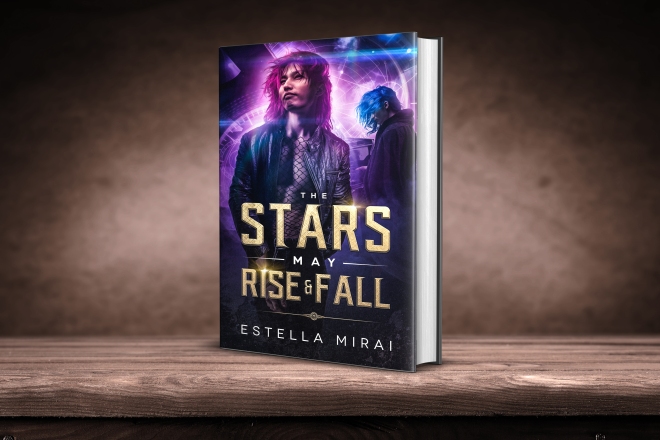 Teru ran his finger around the edge of the card. Maybe it had been a mistake. Should he call, and let whoever had left it know?

He opened the window and lit a cigarette. The smoke floated out into the muggy Tokyo night.

“This is stupid,” he said aloud. “It’s one in the morning. Whoever it is, they’re asleep.”

But Teru wasn’t asleep. His bandmates probably weren’t asleep either. If it was a musician who had left the card, one in the morning was better than one in the afternoon.

He picked up his phone and dialed.

It rang once, twice—and Teru cut the connection. This is stupid. But he didn’t feel stupid. He felt guilty, like he’d been doing something he shouldn’t.

He stubbed out the cigarette and walked across the room to the refrigerator. Nothing but a pack of noodles and a flat Diet Coke. Even though he’d already had a couple with the guys after the show, what Teru really needed was a beer.

On the other side of the room, the phone rang.

The floor was littered with clothes and magazines and Playstation controllers. Teru almost tripped as he lunged for the phone, and then only crouched there, watching it, with his nerves wrapped around his voice box like a snake. There was no name with the number, but Teru knew it by heart. He’d only been staring at it for the past hour.

The ringing stopped. An engine rumbled outside Teru’s window, and a train clattered over distant tracks. Upstairs, slippered feet padded across a tatami floor. The air was thick with an anticipation far from silence—but just as easily shattered by the trill of a different ring.

I heard you sing.

He stared, waiting for the words to sink in. They didn’t, though. They made no sense.

It had only been a mistake after all.

You’ve got the wrong number, he replied. This is Teru, the drummer for La Rose Verboten. I don’t sing.

And then: You should.

“You have a beautiful voice.”

It wasn’t Yasu. It wasn’t anyone he knew.

“A friend.” The voice was male, deep and effortlessly sensual in a way that Seika would have envied. It made Teru distinctly uncomfortable.

“Look,” Teru said. “I think you want Bara. I’m not the singer. I’m the drummer. The one with pink hair?”

“I heard you,” the man pressed. “In the dressing room. I can help you.”

In the dressing room? There’d been no one else in there.

“Is this some kind of joke?”

“What do you want?” Teru whispered.

“To teach you. To help you. Will you meet with me?”

Teru’s palms were sweaty, his face flushed. It was partly exhaustion, partly a lingering buzz… but it was more than that. He felt dirty. This was worse than what he felt with Seika—and it was just a voice on the goddamn phone.

“There’s a studio in Koenji,” he heard himself say.

“No!” the man snapped, and he took a sharp, hissing breath. “No studios. You may come to my apartment.”

“Um… okay.” What the hell did that mean?

“I live in Meguro,” the man said. “Near the live house. I can send you the address. If you’ll come.” There was a plea in his voice, a quiet desperation. Teru swallowed, hard.

“You want to give me singing lessons?”

This was insane. “When?”

“Whenever you are free.”

Teru glanced at his calendar. June, 2000. Three years, almost to the day, since he had stepped off the night bus from Niigata. After all that time, he didn’t even have anything to lose.

Estella Mirai lives just outside of Tokyo with her human family and a very spoiled lap cat. When she isn’t reading or writing, she works in editing and translation—which means that 99% percent of her day is usually words. In her minimal free time, she enjoys watching musicals, cooking (badly), and slaughtering power ballads at karaoke.

The Stars May Rise and Fall is a Visual Kei/male-male romance retelling of the Phantom of the Opera set in Tokyo in the early 2000s. Vocalist Teru dreams of becoming a huge star but his band struggles with their direction and combined with their arguing means that they’re finding it difficult to get the break that they are looking for. This all changes when Teru finds a mysterious business card belonging to disabled composer Rei whose own career ended tragically years earlier. With Rei’s help, Teru’s dream is finally close to becoming reality. When the two of them start to develop feelings for each other, Teru’s denial and Rei’s struggle to let go of the past looks set to put an end to both their budding romance and Teru’s career.

I loved this novel. It is a very subtle retelling which is exactly the kind of story I enjoy; there is enough there to connect it but it is also refreshingly different and can be enjoyed without being aware that it is a retelling.

The story itself is a slow-building and beautiful romance between two characters who have had their share of hardships and want more than anything to be together despite the obstacles that stand between them.  I loved the Visual Kei setting, as a huge JRock/Visual Kei fan myself I very much enjoyed the references to bands I know and love.

The characters themselves are very relatable and you can really feel everything that they are going through. The two of them have an incredible connection to the other and this is really conveyed through their interactions and even when they are apart.

The Stars May Rise and Fall is a wonderful debut from Estella Mirai and I look forward to reading future works by her.

4 thoughts on “Blog Tour and Review: The Stars May Rise and Fall by Estella Mirai”