Their ocean journey was successful, and Andrew and Edmund found an Elder just in time. As they wished, Edmund is now a vampire like Andrew. They have eternity together, but first, they must visit Edmund’s ailing mother in the English countryside with their flock of immortals, including the Elder, who has taken an ominous liking to his new creation.

When they arrive at Edmund’s family estate, his sick mother and her loathsome best friend await them. While ducking religious curses, Edmund struggles to harness an unexpected power gifted him by the Elder. Andrew fears for his beloved as Edmund becomes more and more monstrous—but vampires have always been monsters, haven’t they?

A battle is coming, for Edmund’s heart and his soul, and Andrew will lose neither. He escaped island exile and a near tragedy at sea to be with Edmund, the beautiful young sailor he loves. Andrew will do anything to keep Edmund by his side, but his most dangerous adversary may be Edmund himself.

Chapter One
Edmund tries desperately not to shiver, but he forgets himself every minute or so and allows a full body shake that vibrates the wet edges of his hair. We’re back on deck after our desperate leap into the ocean, my sailor and I. A half-hysterical Michelle wrapped us both in the heaviest fabric she could find once we were both safely lifted back onboard with our new passenger: the Elder.

He sits across from Edmund at a large table in our ship’s common area while I stand and glare. Michelle and Felipe linger silently to my left and right.

This Elder is nothing more than a rotting skeleton, covered in loose, hanging flesh. He smells of dead fish and refuses to take his dark eyes off the man I love.

“You are dying,” the creature says, his voice like the swinging of a rusted gate.

Edmund chuckles. “Yes. So you understand why I need your help.”

“Why do you want this gift, dead man? Power? Prestige?”

The creature’s gaze momentarily swings up, and I stand straighter. For the first time since we escaped the rolling waves, the Elder addresses me: “How frustrating for a strong vampire such as yourself that you cannot save the one you adore.”

I’m about to respond when Edmund speaks first. “I would prefer to keep this conversation between the two of us, if you don’t mind. It is, after all, my life we discuss.”

The Elder studies Edmund and says nothing. For a long moment, he merely observes. Although the blanket covers Edmund’s black, infected flesh, it’s impossible to miss the green pallor of his skin, the purple circles around his eyes, and the color of his lips, now practically white. All signs of the healthy young man I first met are gone.

“You have no fear right now, dead man. Strange for one with so little time left. I tasted it underwater, your fear. Quite a strong bouquet.” A tongue like a slippery snail pokes out from the Elder’s mouth to lick cracked lips.

“You tried to pull me under.”

“I needed to get your attention.”

I’m not sure, but I think the Elder smiles. He shows his teeth anyway—long, pointed fangs bigger than any I’ve seen. “And now, you have it, dead man.”

Again, those eyes—so dark as to be almost black—glance at me. “Brien.” He growls the R. “If the world is still how I recall, Edmund, nothing is free. You woke me with your dying flesh because you need something.” He opens his hands before him, skin wrinkled, sharp fingernails like weapons. “What do I get from you?”

Edmund shivers and groans. When he bends over in pain and rests his forehead on the table, Michelle stops me from rushing forward. “What do you want?” Edmund asks.

As my darling struggles to find the strength to sit, Brien watches with interest—I assume. It’s difficult to tell with the sagging, wet flesh. Logic says the Elder should be dry by now, but he continues to drip foul water as though made of the stuff.

“You can have anything,” Edmund says.

Brien leans forward and sniffs, seeking Edmund’s scent. “I want to kill you.”

“Edmund requested I do that.” I could say more about how I want to taste his soul, how I want that moment to belong to me and me alone. I want him in my arms the moment he takes his last breath. So many things do I want, and this monster of the sea would steal it all.

“Damn it.” Edmund closes his eyes. “Fine. My life is yours.”

“It is better than the alternative, love,” Edmund mutters. “Is that all you require?”

“I will travel with you wherever you now go.”

My old friend—once enemy, now leader—steps forward in her sweeping skirts. “Of course, Elder Brien. We are at your service.”

“You might want to…” Edmund coughs. “Find something to wear. They frown upon naked corpses walking around London.”

Brien lowers his head. “Yes, Edmund.” He looks up and shows his teeth. “Ah, there it is—the smell. Now, you are afraid.”

Edmund’s eyes are red. I don’t know if he cries from pain or from the thought of his own murder at the hands of a hideous monster. Perhaps he found comfort in the thought of me doing it because he knew I wouldn’t let him hurt. Brien appears liable to chop off each of Edmund’s fingers before letting him die—but I will not let that happen. I will be at his side. I will hold Edmund’s hand as his heart stops beating. Thinking of this, my own chest begins to ache.

My God, what if this doesn’t work? What if the Elder kills my darling and jumps back overboard? What if these are the last moments I have with the only creature I have ever loved? I lean down quickly and kiss Edmund’s forehead.

I pick him up and carry him to our room. The others follow close behind. In fact, the entire crew stands in the hall, watching us pass. What’s about to happen hasn’t happened in centuries, and I suppose everyone wants a view.

By the time I rest my shivering love in the center of our bed, someone has given Brien a cloak, although it does little to hide the emaciated ground meat of his face. Michelle comes in but locks everyone else out, for which I am thankful.

I kiss Edmund, and Jesus, he smells almost as bad as the Elder. I kiss his lips softly as he whispers he loves me.

“I love you too. I’ll be right here.” I squeeze his hand and kneel on the edge of our bed.

From across the room, Brien watches me again with what I suspect is delight. I want to bark at him and ask what on earth could be so funny, but I bite my tongue. Now is not the time to provoke the only man who can save Edmund. As he leans forward, I lean back, paying the Elder respect.

He looms over Edmund, but strangely, instead of beginning his feast, he rests on his side and touches Edmund’s hair with his pointed nails. “I am going to kill you now, but I will give you a new life. One without sickness or death. Do you accept this gift I give?”

“Half drowned on a beach?”

Although I can’t help but smile, the Elder seems confused. “Perhaps not. Picture yourself how you want to be, and in a little while, it will be so. Do you understand?”

Edmund nods again and flails for my hand. I entwine our fingers.

“Thank you for your offering,” Brien says. He then moves faster than even my eyes can manage to follow. 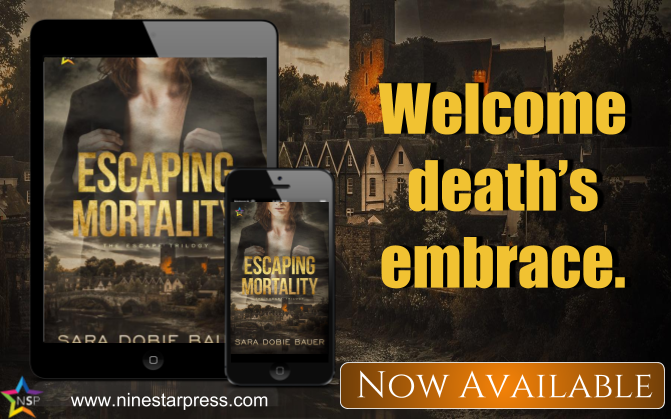 Escaping Mortality is the final book in the Escape Trilogy. Andrew and Edmund’s search for an Elder was successful and Edmund is now a vampire. However the Elder shared more than just his immortality with Edmund and the ancient vampire insists on accompanying his new creation, much to Andrew’s displeasure. They journey to England to visit Edmund’s sick mother and the visit forces Edmund to confront the past that he tried to desperately to leave behind. Struggling with his past and new powers that the Elder gifted him with, Edmund’s aggressive behaviour becomes a constant concern for Andrew and he fears that his desire to keep Edmund with him forever may be what drives them apart.

I was really excited to read the conclusion to the trilogy and it did not disappoint. I loved the twist of the Elder sharing his powers with Edmund and as a result becoming infatuated with him. Andrew’s desire to protect his lover and defend his claim to him almost backfired on him and you could really feel how powerless he felt in the presence of the Elder. Yet he was still determined to save Edmund with little thought for his own safety.

This conclusion to the series really shows just how much Andrew, Edmund and their relationship has developed since the beginning. As well as forming a passionate and loving relationship with each other they have both overcome their inner demons and are better as a result of it. I was sad when I reached the end but the finale is beautiful and completes their story perfectly. I highly recommend the Escape Trilogy to vampire/male-male romance fans.

One thought on “Book Blitz and Review: Escaping Mortality by Sara Dobie Bauer”