Series: The Realm of the Vampire Council, Book Two

The Vampire’s Quest brings back the beloved gay vampires, Xavier and Thomas, in the anticipated sequel to The Vampire’s Angel.

In 1822, the Archangel St. Michel orders Xavier to go on a quest to America, a quest that violates the Vampire Council’s laws to the point of a possible death sentence. Worse, Xavier must abandon his lover, Thomas. Xavier runs to his aging sister and pleads for Catherine’s help as Thomas races after them. With Thomas and the Vampire Council vying for Xavier’s soul, Xavier and Catherine struggle to obey the former priest’s divine calling before their inevitable capture.

St. Michel stood before Xavier in all his glory, with his sword in one hand and a stern look peering through the golden light flooding from behind. “Listen, Child of God, and obey. Go to Mont St. Michel. Go to the monastery and cathedral built to my legacy and to God’s glory. There I shall issue further instructions.” As St. Michel parted, his sword lashed across Xavier’s forehead.

Xavier cried out in his sleep, waking with blood dripping from his brow. The confines of his coffin never felt so claustrophobic.

He reached up to discover the gash from St. Michel’s sword already starting to heal. Why did that surprise him? Vampires healed almost instantly. But how could he imagine their magical healing powers could undo the wrath of an angel rained down in a dream?

The lid to the trunk-cum-coffin lifted and candlelight flooded Xavier’s face.

“What’s wrong?” Only when he heard Thomas’s alarmed voice and looked into his piercing dark brown eyes did Xavier realize his lover had already awakened for the night and no longer lay next to him.

“Nothing?” Thomas almost shouted. “You were screaming. And you bled. There’s an injury here.” Thomas reached down and touched Xavier’s forehead where St. Michel wounded him.

Thomas lifted Xavier out of the trunk and moved him to the nearby bed. He held Xavier in his strong arms and rocked back and forth. “What’s going on, abbé?” Thomas used his affectionate nickname for Xavier, from his human days as a priest. “Tell me.”

“You have to believe me. I know you don’t have the same faith, but this is real.”

“We have to go to Mont St. Michel in France. Immediately. Tonight. St. Michel, the archangel himself, commanded it.”

“Anthony will understand.” Xavier trusted their closest friend, and the oldest vampire they knew, would accept their explanation for a hasty retreat.

“It was just a dream. Aren’t you overreacting?”

Xavier stifled his rising panic. He pointed to his coffin. “The blood. You saw it for yourself, on my forehead. He cut me as a warning. Please, you have to believe me. We have to go.” Xavier hated the desperation in his voice. It made him sound unhinged, almost as unstable as the time he disappeared during the French Revolution while human, lost in his drunkenness because he fled from Thomas’s love.

“Then we’ll go.” Thomas petted Xavier on the head, then leaned over and kissed his cheek.

Thomas chuckled but squeezed Xavier in his arms. “Always. I never know if your visions are a flight of fancy or real. But they’re a part of you. Have I denied you anything since I converted you to a vampire? No. And I never will. So we’ll go.”

Thomas’s skepticism almost convinced Xavier to question what happened, until Xavier stood and saw the blood stain on the silk lining where he slept.

Moments later, Xavier and Thomas said goodbye to Anthony, who as expected, made no protest at their sudden departure. They crossed the English Channel by swimming at vampiric speed and approached Mont St. Michel.

The mere sight of the majestic place awed Xavier. On the northern tip of France sat a small island upon which stood a mystical cathedral, rising out of the clouds and reaching up to the heavens.

Built from the eleventh to fifteenth centuries, legend had it St. Michel visited St. Aubert, the bishop of Avranches, three times in a dream, commanding him to build a tribute to the saint atop the island rock. Enraged, the bishop had not heeded his call; on the third visit, St. Michel hammered the imprint of an anvil into the bishop’s head, so when he woke he would believe the saint visited his sleep. Impressed by St. Michel’s message, the bishop commenced the project, which took several centuries and various manifestations to complete.

The soaring cathedral built atop the island stretched into the night sky as the two vampires slowed their pace. Xavier and Thomas walked through the fields of grazing sheep toward the water, where they again would need to swim because of the high tide engulfing the island. The small city beneath the castle still acted as a medieval village, with gates and stone walls surrounding it for protection. The one road on the island wound up the steep hill, toward the abbey and monks’ quarters. Above the village, overlooking all of France, the church stood as a legacy to medieval architecture and its grand monuments to God and St. Michel.

St. Michel called Xavier to the shrine, the grandest of all memorials to him. Thomas and Xavier woke an innkeeper and rented an entire floor of his establishment for privacy. They then explored the small island’s shops, closed for the night, and last, the grand monastery perched atop. They took a few needed items from sleeping merchants, including an enormous traveling chest they could convert into their temporary coffin, but left behind twice the value of the objects they took.

Xavier and Thomas concealed themselves in their rooms inside the trunk. Xavier braced himself, as the sun rose, for another visit from St. Michel, but woke the next night well rested. With no further divine instructions, the vampires made love and decided to further explore the island.

Inside the cathedral, overlooking the channel, Xavier again talked to Thomas about why they came to Mont St. Michel.

“Did you ever think you’re worried about something else?” Thomas pulled Xavier into his arms. Xavier loved the feel of Thomas’s long, black hair against his cheek. “Maybe these visions mean something else. Archangels don’t really visit people.”

Xavier looked into Thomas’s brown eyes and ran his fingers through his hair. “You saw the blood.”

“There are a thousand explanations for that. Why go to ghosts and spirits?”

“Because he came to me.” Xavier put his head on Thomas’s chest, afraid Thomas thought him insane. Insanity would have been easier to confront than the actual visit from an archangel.

“And so we’re here. What now?” Thomas asked.

“We wait.” Xavier shrugged and pulled away. “We can tour this magnificent place.” Xavier twirled and motioned to the tapestries and view around them. “Here, come back to the courtyard. The view is magical.” He reached for Thomas’s hand and pulled him outside.

As they admired the water and saw the lambs sleeping on the mainland of France, Thomas came up behind Xavier and wrapped his arms around his waist. Soon, Thomas’s tongue lapped at Xavier’s ear and his hands wandered across his body. Xavier tensed with sexual passion, leaning into his lover, forgetting about the archangel for a moment.

“Someone will see,” Xavier said half-heartedly, at the same time reaching his head back to lock lips with Thomas. “Should we go to our rooms?”

They made passionate love to one another, right in the churchyard.

“Blasphemy,” Xavier said to his lover as they redressed. “In front of a church. I already have an angry archangel after me.” Xavier wondered how much he really meant. Did he think God would disapprove? Xavier felt sure God would dwell more on the power of their love for one another.

But what of St. Michel? Xavier doubted he had the same forgiveness as God. His legacy of violence against those whom he enlisted on his missions told a different story. Then again, Xavier felt certain last night St. Michel would come to him at once, either in their quarters or while Xavier slept through the day. Nothing. No vision. No sign.

“Leave the archangel to me. Nothing will harm you.” Thomas smiled at Xavier as they walked down the steep steps toward their inn. “You need to relax.”

“Then we’ll wait. For as long as you need and as long as he doesn’t prohibit sex.”

“He might not want it in front of the sanctuary again.” Xavier grinned. Thomas’s penchant for blasphemy amused the former priest, despite certain irrational qualms about it. Thomas laughed and pulled Xavier close to him. They spent the remainder of the night in their quarters, with Xavier writing to his aging sister, Catherine, in Paris and Thomas organizing financial affairs.

Before the sun appeared, Xavier retired to their makeshift coffin. Exhausted, he soon fell asleep, before Thomas joined him. 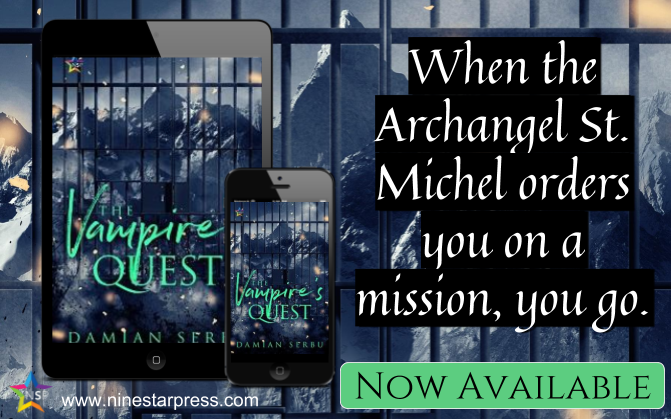 Damian Serbu lives in the Chicago area with his husband and two dogs, Akasha and Chewbacca. The dogs control his life, tell him what to write, and threaten to eat him in the middle of the night if he disobeys. He has published The Vampire’s Angel and The Vampire’s Protégé with NineStar Press. Coming later this year from NineStar: The Vampire’s Quest and Santa Is a Vampire.