The Human Planets Collective sent young Ambassador Kaj Deder to the former colony planet Ostakis to establish relations. But in the twenty-five hundred years since Earth lost contact with Ostakis, the people of that colony have dramatically changed. Kaj is tasked with finding the reason for these changes while he forges trade links between the HPC and Ostakis. Without trade with the HPC, the dwindling resources of Ostakis will ultimately end human life on the planet. But his mission faces a huge obstacle in the form of Most Reverend Thyenn Sharr, the head of the Faith Progressive Church, who sees the arrival of Kaj as the beginning of the end of the Church. Kaj’s powerful attraction to Trademaster Klath’s son, Arlan does not smooth relations.

Arlan Klath, the son of the Trademaster of Ostakis, bears the secret that the pious people of his planet want to hide from the homeworld and the HPC. The Curse of the Unspoken, wrought through the unspeakable acts of the First Colonists, afflicts all Ostakians, but some more strongly than others. Arlan is totally Cursed, considered born sinful and he lives without legal rights or property. He is scrutinized by Sharr who is enraged that Arlan’s father defiantly refuses to submit Arlan to a cruel act to “redeem” Arlan’s soul. The stakes increase when Arlan and Kaj form a relationship that Thyenn Sharr considers ample justification to usurp the Trademaster position through the power of his Church.

You would ask if I’m upset with my new posting. No. Not that. Discomforted. Yes. That is the correct word. You know I am a man who likes his routines, the stuff that meshes you to the pleasurable aspects of living. A delicious cup of coffee in the morning. Grilled vegetables on the barbecue and a nice glass of wine on the terrace in the evening. Everyday things.

Where I head is not ordinary…

Landfall is the most dangerous part of the journey.

The transport shook and rattled as it descended to hit the atmosphere of Ostakis. Flames flared from the heat shield and now I know why the pilot told me to pull the shade on my seat window. It’s terrifying watching the flames of friction ignited ionized gas shimmer outside the window and engulf the ship. To take my mind off my impending death I mulled over my last briefing with Director Kotel.

“How terraformed is this planet?” I had asked the director. We both paged our copies of the sparse notes and reports on Ostakis on our government issued readers. Survey had just turned in the information, and I was eager to see it. But, at the director’s request, I had to wait until this meeting to go through it thoroughly.

“Not quite Earth normal,” said Director Kotal. “Ten percent of the original plant and animal forms still survive. The Ostakians fight the planet’s encroaching desert sands. The shield wall the colonists built is in disrepair.”

That was an interesting bit of information. “Any reason why?”

“Our survey found abandoned population centers. Grey and Jacobs in Analysis think the number of people is shrinking. They may not have the workers to maintain it.”

“So, after all this time, it has begun.”

“Yes. It had to, didn’t it?” She stood and stared out of the port window that revealed the desert planet beneath us. “If any planet needs what the HPC offers, it is Ostakis.”

A silence hung between us. The urgency of the mission weighed more heavily.

“And another thing,” she said. “The scout team reported rumors, or myths, of aboriginal tribes hiding in the desert.”

We looked each other in the eye. The first hope of Earth had been finding indigenous sentients, but to our disappointment found none.

“Our lack of knowledge of the basis of the Faith Progressive Church hampers us. They didn’t send literature on their precepts.”

“Exactly. So we can only assume that there are things they don’t want us to know. Be careful of Thyenn Sharr, Kaj. He’s the church’s head man. I can’t impress this enough on you. Their highly conservative religious movement does not condone much that isn’t praying and preaching. The hardest part of this assignment is conforming to the societal norms of the planet.”

“Until I otherwise need to.”

“Yes,” she said with a nod of her head. “Until that. So tread carefully.” 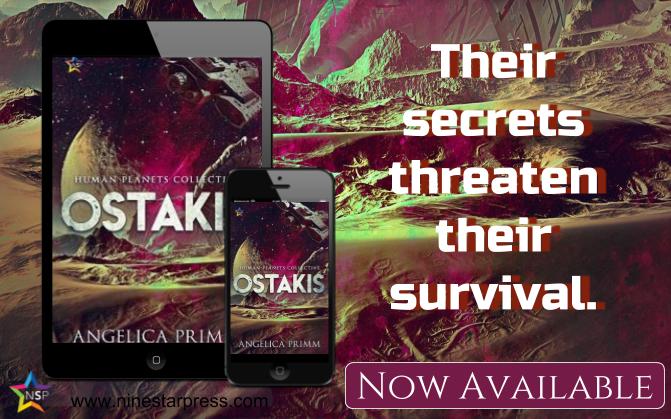 Angelica lives in Connecticut with an odd assortment of cats and humans and putters at hobbies ranging from art to bird watching when she’s not turning a phrase for her supper.