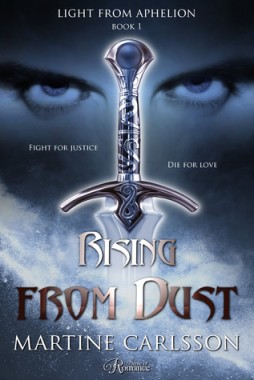 Rising from Dust (Light from Aphelion 1) by Martine Carlsson

FIGHT FOR JUSTICE. DIE FOR LOVE.

War is raging in the kingdom of Trevalden. Up north in the Frozen Mountains, the amnesic hermit Selen survives as the pariah in his community. Drawn by a mysterious call, he travels to Trevalden and meets Louis, an enigmatic archivist. Together, as Selen remembers his past, they face the desolation of war with a group of misfits. For the sake of the people, they fight back the king’s armies, prepared to meet death…or a new dawn. As Selen and Louis understand that their feelings for each other may be their undoing, they are torn between their emotions and the greater good. But in the end, what is the greater good?

While they try to find their place in an unknown world, they carry a secret that will shatter the society and make them realize that the hardest fights are not against dragons but within oneself.

Rising from Dust is an epic journey where gritty fantasy and history cross paths. A graphic story of loyalty, violence, magic, court plots, and unwavering love where no one is what they seem.

Rising from Dust on Goodreads

When strangers Louis, Selen and Lissandro are mysteriously drawn together they find themselves not only fighting for the land that they have been re-born into but also piecing together their former lives. Each is terrified that the tragedies that befell them the first time will repeat themselves once more.

Louis is a heroic warrior who does not hesitate to put his friends’ lives above his own. Driven by his strong ideals and desire to make the world a better place, his determination sometimes prevents him from seeing the truth in how things are vs how he wishes to see it.

Selen, whilst also a warrior, is a gentler character and his sense of compassion is also a positive influence on Louis. He is fiercely loyal to his friends and shares Louis vision for the future of their world.

Selen and Louis are in a relationship which, if discovered, would get them both killed. Their relationship is one of my favourite aspects of the novel. It is beautifully written and you can really feel just how much they care for each other.

Lissandro’s character has a more accepting and practical view of the world that they now live in. His advice and guidance to Louis is more practical and he’s not afraid to speak out if he feels his friend is making a mistake. I feel that perhaps his character was not explored fully in book 1 and look forward to seeing much more of him in book 2.

I absolutely loved this first novel in the Light from Aphelion series. It combines two of my favourite genres; fantasy and history. The immersive world and wonderful main characters draws you in right from the beginning and I just didn’t want to put this book down. I enjoyed slowly uncovering the details of the characters previous lives and how they were linked to world-history. The detail in the battle scenes, whilst quite graphic in places, was brilliantly written and I really could imagine that I was right there along with them.

There is never a dull moment in this novel and there are plenty of twists and turns that I did not see coming. The finale of book 1 is beautiful and couldn’t be more perfect.
I can’t recommend Rising from Dust (Light from Aphelion 1) enough and cannot wait to read book 2 in the series.

One thought on “Review: Rising from Dust (Light from Aphelion 1) by Martine Carlsson”