Freezing to death took longer than expected. Auryn hadn’t moved in over an hour, lying in the snow, staring up at the stars. His toes burned and his bare fingers prickled painfully, flushed red from the cold. He’d considered a variety of other options, including shooting himself in the head, but feared screwing up and adding a traumatic brain injury to his list of grievances. He thought about hanging himself from a peach tree in Building A, but the fruit was being harvested and there were too many people around, even at night.

Forced to decide quickly, he hopped in a snowcrawler and sped off. He could’ve kept going, travelling beyond the oxygenated zone, opting for death by hypoxia, but he pulled over and picked a final resting place.

The radio in his earpiece crackled. The Special Activities Division were getting closer. It wouldn’t be long before they reached their target, terrorist Reisen Kaneko. Auryn hadn’t seen Reisen in over a decade, but his fondness for the man remained intact, uneroded by the passage of time. He’d hoped they’d be reunited one day, despite how impossible it was. No chance of that now. Abandoning his delusions meant being left with nothing, crippled under the weight of reality and longing for oblivion.

Countless stars illuminated the sky, radiant mothers to other worlds, a painful reminder of their own orphaned condition. His Holiness Emperor Haken swallowed planet Ankari’s sun centuries ago—punishment for widespread civil disobedience, or so the story went. While Emperor Haken’s fire-swallowing abilities were never questioned, it was whispered he may have simply taken credit for a dying sun’s disappearance. This explanation made sense to Auryn, but Reisen loved tearing it apart.

“A sun like ours doesn’t die the way most people expect it to. It burns bigger and brighter, swelling like an infected gash, incinerating planets nurtured from their inception. The final act of a deranged mother. Ankari is close enough to the sun that we’d all be burned alive instead of freezing our asses off.

“If the sun did disappear, it wasn’t due to natural causes.”

This was it. If he had any sense, he’d turn the radio off, but he needed to be sure someone hadn’t made a mistake.

Door’s locked. We’re going to break it down.

There’s someone in the bed.

Auryn closed his eyes, inhaling deeply. The cold air choked him, scratching his throat and lungs like tiny, frozen thorns.

He struggled into a seated position, limbs stiff and heavy.

He pulled his hat and gloves back on, skin on fire. Reisen’s son would be sent to the capital and interrogated, treated not like a human being, but as an opportunity for promotion.

Auryn extracted himself from the snowbank he’d intended to be his tomb. He knew where they’d send the boy when they were done with him. Exhibiting the motor skills of a two-year-old, he climbed into his snowcrawler and turned the machine around, heading back to the Farm. 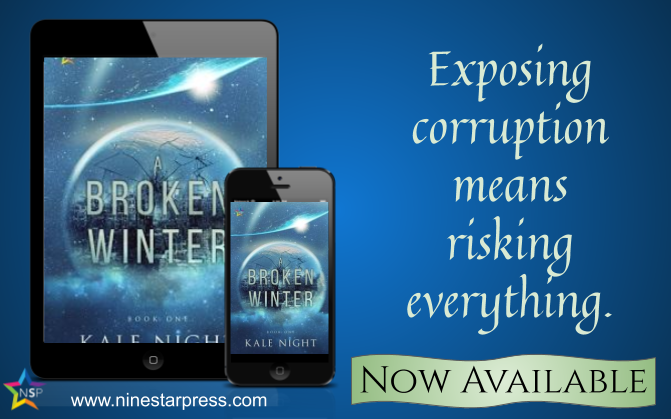 Kale currently resides outside a small town in northern Alberta, where she works in a library. She’s an avid reader with an English degree from the University of Calgary. In her spare time Kale loves playing video games, making chain maille, watching anime, and cultivating a steadily expanding bonsai collection.

One thought on “New Release Blitz: A Broken Winter by Kale Night”