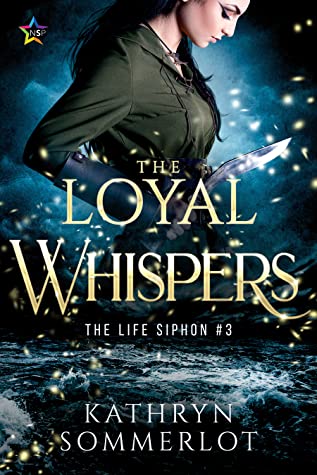 Mairi: the Runonian king’s advisor seeing the outside world for the first time

Alesh: an alchemist’s apprentice in Joesar with a past rapidly catching up to her

Three women find themselves caught in the threads of change as the world threatens to fall apart around them. From across the Oldal Sea, the southern kingdom of Dusset has declared war, and if anyone is going to survive it, the alliance between Runon, Chayd, Rad-em, and Joesar must be solidified.

But there are forces at work that could undermine all the progress King Yudai and Tatsu have made. Peace treaty negotiations between the four realms could crumble at any time beneath the building tension.

As the women’s paths converge, they must navigate the true meaning of loyalty to themselves, their countries, and their families, while at the center of it all, a shattered king, hellbent on revenge, threatens the world balance.

*I received an advance copy for free for an honest review*

The Loyal Whispers is the third novel in The Life Siphon series. Instead of being told from the points of view of the main characters from the first and second novels, the author took the bold decision to tell it almost completely from the points of view of three female characters who play pivotal roles in the third instalment. This move really did pay off and through them you learn so much more about the rich and detailed world that the author has created.

It was great to see more of Alesh and Ral, and the characters of Mairi and Ravee were wonderful additions to the cast. Through them you see Yudai and Tatsu struggle to build alliances when the world around them is fracturing. As well Yudai still faces his own inner battles and demons. This is expanded on more in the latter half of the novel, foreshadowing possible events to follow.

The plot itself is a thrilling combination of action, magic and the politics driving the first two. Combined this creates an engaging and gripping read that I didn’t want to put down.

I absolutely loved The Loyal Whispers and the amazing world that the author has created and I really hope that there will be further novels in the series.

One thought on “Book Review: The Loyal Whispers (The Life Siphon #3) by Kathryn Sommerlot”