The Swift is gone.

Weeks after the catastrophic power failure that triggered the evacuation in the first place, the ship has powered up and taken flight, abandoning its jettisoned escape pods deep in uncharted space. Stranded with dwindling supplies and no way of calling for help, Hélène LeFebvre needs a plan. Or at least somewhere to bury the dead.

Hélène isn’t a people person at the best of times, and trying to build a new comms array on a hostile alien moon is definitely not the best of times. Her only help is a nurse who won’t stop praying, a pilot whose attitude adjustment could take several centuries, three maintenance crew gambling with coffee beans to pass the time, a homicidal cook, and a medical officer convinced that the unseen monsters that stalk their pods at night are there for him personally.

All too aware they’re running out of time, Hélène doesn’t have time for their flaws, or to examine her own. She can’t afford to be human if she’s going to save them.

But perhaps she needs to remember she’s human in order to save herself.

The airlock hissed and jettisoned its load with a dull thump. Through the tiny viewing window, the foil blanket that had served for a funeral shroud faded away into the abyss and winked out of view.

Nobody said a word.

“Between the devil and the sea, you’re colouring for show.”

There had been eight of them in the beginning. Now, three stood by the door, warped shadows in the emergency lighting bidding a silent farewell to the fourth. In the dark, they were all the same shape. Tall ghosts, two with glittering eyes.

The third turned away.

It took four steps towards the cockpit door before a noise cut across the vigil. The whisper-soft voice crackled up the walls like fire and singed the air. The crisp consonants bracketed soft vowels, refusing any temptation to blur into a softer tone. Quiet did not mean gentle. Not here, and not now.

“Where are you going?”

For a moment, it worked. A stillness returned, and for a split second, it seemed as though the semicircle of sentries at the airlock door could be rebuilt. But then the footsteps continued, creaking along the gantry towards the cockpit door.

As though it were a scene from a play, the shadows balanced the edges of the stage that had become their prison. The detractor at the cockpit door. The speaker in the centre. And the sentry, sinking to his knees in front of the airlock and murmuring the funeral prayer, a soft music bubbling up to join the pop song bidding farewell to the brainless corpse of Maintenance Technician Edward Sanders.

“They’re staring at the glitter and not the centre of the hole.”

Brainless because said brains were still splattered up the wall of the toilet where he’d shot himself. A single deafening boom and the being known as Edward Sanders was gone. All his hopes and dreams, all his history and possible futures, everything. Gone. The sparks of life buried in his neurons had been plastered up the shower tiles, and that had been that.

But Hélène LeFebvre was not gone, and she let herself back into the cockpit without a trace of sorrow. Eddie had died. His husk had been flushed into space so its decomposition wouldn’t harm the rest of them. Now she had a job to get on with.

She had to find them a way out of this mess.

Hélène LeFebvre, the best navigation officer in the company, had also been the best in the military before she was enticed away by a higher salary. So they were in deep space. So they were weeks from any mapped trade routes. So what? She’d been trained for this. She’d successfully tracked their ship ever since the evacuation, even through a ship-wide power cut and a compromised communications array. And now—

“And you’d give all the world so I would never know.”

Hélène swallowed as she sank into her seat and glanced at the navigation console. The sensor screens stared back at her in the dark, empty and mocking. Every time she blinked, she could see the neon green of the mass they’d been tracking for weeks—but it existed now only on the backs of her eyelids. The mass—the ship—was gone.

“You’ve got all your secrets, wrapped up in the dark.”

They evacuated weeks ago after a fire in the engine room had taken out the entire power supply, including the emergency generators and the solar batteries. It should have been a simple affair. They were in the middle of a drill, so the evacuation itself had been orderly. The duty engineering team would remain behind to repair the damage. It should have been over in a matter of hours.

Eight weeks later, and they were still locked into the escape pods with dwindling supplies and draining batteries. Eight weeks they’d been following the ship, waiting for someone to light her up again and welcome them back on board. Eight weeks.

“And I know every one, and I’ve never missed the mark.”

Following the ship had been child’s play for a navigator like Hélène. She’d even fixed their comms array and been broadcasting instructions to the other pods. Nobody ever replied, but they’d followed her. They couldn’t speak back, but they could plainly hear. If there had been a higher-ranking officer out there, they’d fallen into the chain of command dictated by the only working array in the fleet. And until the early hours of the morning, Hélène had been in control.

Until the ship had lit up like a Christmas tree across all sensors, not just mass. Until it had turned instead of drifted. Until a vapour trail had bled out behind it as if they chased a harpooned whale in a vast sea.

And then it was gone.

The flash of hope as EU-404 had powered up and corrected course had been snuffed out mere hours later. When she’d turned again, her engines burned like the surface of a star, and she had vanished into the dark. 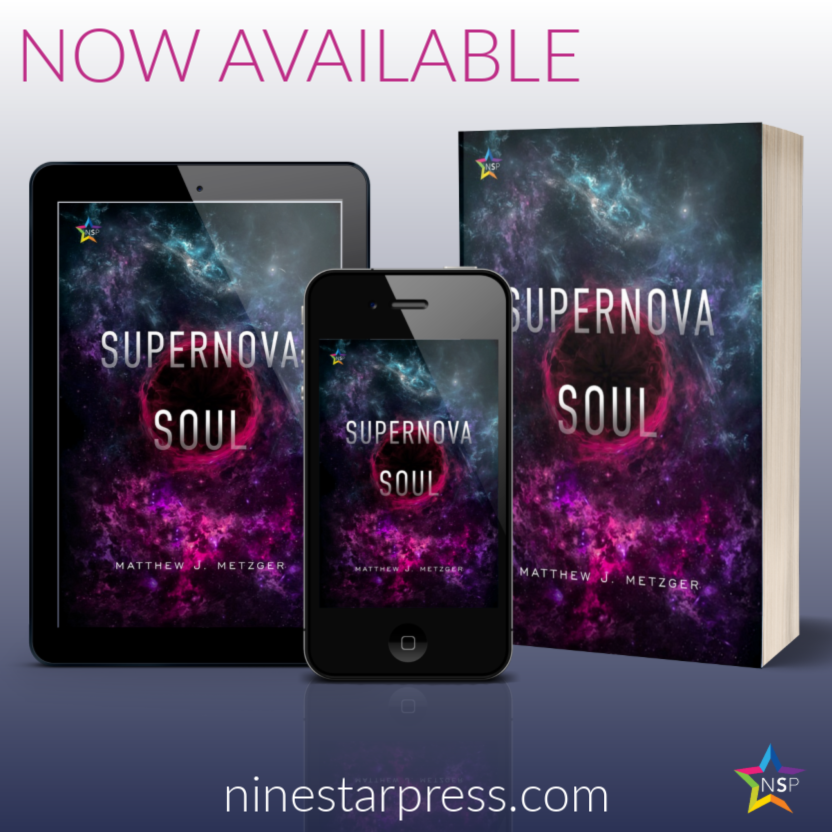 Matthew J. Metzger is an ace, trans author posing as a functional human being in the wilds of Yorkshire, England. Although mainly a writer of contemporary, working-class romance, he also strays into fantasy when the mood strikes. Whatever the genre, the focus is inevitably on queer characters and their relationships, be they familial, platonic, sexual, or romantic.

When not crunching numbers at his day job, or writing books by night, Matthew can be found tweeting from the gym, being used as a pillow by his cat, or trying to keep his website in some semblance of order.