It is a standalone book.

In the stormy coastal woods of the Pacific Northwest, roots run deep and passions run wild.

Reeling with grief after the mysterious massacre of his wealthy family, moody New York photographer James Worthington Crane decides to take his downward spiral somewhere far away: to the rural Oregon Coast, where he’s just inherited a random piece of property hidden somewhere in the woods upriver.

But when James pulls into the decaying seaside town of Brooks, everyone thinks he’s someone else—an elusive local outlaw named Beau. Now James must fight through his grief to unravel a tangled web of family secrets and forgotten history…with help from a soft-spoken local hunk named Hunter Quaid.

Hunter’s been on his own since he left his fundamentalist family at the age of fifteen. It’s taken years of hard work to build the steady life he has now, fixing up seaside houses while living alone in a trailer by the river. Then James blows in like a winter storm, disturbing the peace and stirring up a hunger like nothing he’s ever felt.

As Hunter helps James search for the truth, their lives intertwine in unexpected ways—and they begin to discover what it means to find out where you really belong.

Hunter pulled his truck into one of the slanted parking spaces along the Brooks sea wall and turned off the ignition, cutting off Bobbie Gentry in the middle of ‘Ode to Billie Joe’ to let the roar of the waves take over. It was windy out, and he took a second to rake his dark-blond hair into a stubby ponytail at the nape of his neck before getting out of the truck.

His work boots hit the asphalt with a heavy thud, and he strolled over to the rustic stone barricade to look out at the dark ocean. A wave immediately exploded up in front of him, white foam fanning out and dissolving like a burst of fireworks, and he filled his lungs with the sharp, salty air. It never got old, no matter how many times he came here. None of it did, though. Not the trees, the rivers, the sunsets, the storms. This rugged little chunk of the coast had been his most consistent, and sometimes his only, source of joy since the first summer his parents dropped him off at his grandma’s place upriver, where he now lived alone.

Today had been long as hell, but satisfying. He was in the middle of renovating a beautiful midcentury house on Cedar Crest, a wooded cliffside high up on the north edge of town. It was the biggest project he’d ever landed since striking out on his own as a contractor, and it was turning out to be a dream come true. The owner was some Portland banker who didn’t give a shit what he did as long as he stayed within budget, and Hunter relished the freedom to make actual design choices.

Matter of fact, life was pretty good these days, wasn’t it? Business was good, anyway, and that was a lot. Yeah. Steady work with nobody telling him what to do, a place to sleep by the river, all the ocean air he wanted every day…what more could he ask for? There was a time when he wouldn’t have dared to dream so—

A car alarm went off suddenly, jarring him from his thoughts, and he turned his head. Several seagulls were scattering noisily from the sea wall near a black hatchback several spaces away, its horn blasting and lights flashing. He couldn’t see what had set it off. A nosy gull, maybe, or the splash of a wave. At any rate, that wrapped up his relaxing after-work sit by the ocean.

But just as he was about to turn back to his truck, the driver’s side door of the hatchback clunked open and slowly creaked ajar.

Hunter watched, intrigued, as a hand slipped out through the crack, followed by an arm, and then a mop of wavy dark hair. Then, to his amazement, an entire tall, slim man slid out onto the pavement, pooling there in a tangle of long limbs and dark clothing.

The alarm was still making a ruckus. The man groaned low and rolled to his side, wrestling with himself for a moment before yanking a key fob out of his back pocket. He jabbed it toward the car several times until the alarm stopped, then fell on his back with an unintelligible mutter. Just then, a big wave spouted over the wall and showered him with seawater.

Hunter winced sympathetically. Hell of a place to be drunk off your ass. Dude definitely wasn’t from around here. He looked about Hunter’s age, stylish in a cool, classic kind of way. Black jeans, black boots, battered brown leather jacket. Nothing flashy, but obviously outside the local dress code of Carhartts, hooded sweatshirts, and rain gear. Hunter couldn’t help admiring the long lines of the stranger’s body, his carelessly tousled hair.

With a shake of his head and a soft sigh, he turned his gaze back toward the ocean again. Life was good, and all. He loved it here. So what if it wasn’t overflowing with romantic options for a quiet gay man with a taste for tall, slim guys dressed like drifters from the 1960s? No one got to have it all.

The sound of an approaching engine made him glance back over his shoulder, and suddenly he sprang into motion before he could think.

The drunk man was staggering onto the highway, his dark silhouette backlit by the high beams of a log truck that was roaring around the bend.

Another half-second would have been too late. The driver didn’t even seem to see them. The air from the passing truck threw him off balance as he yanked the drunken dumbass out of the road, and they both fell back on the pavement.

Claire Cray writes gay romance featuring hot, complicated men in weird situations. Offbeat and character-driven with a gothic bent, her work has been described as deeply atmospheric and a little bit strange.

Born and raised in the rural Pacific Northwest, Claire takes inspiration from its rich, moody vibes: the ancient forests, rugged coastlines, eccentric characters, and whispers of dark mystery in even the tiniest little towns. Combine all that with steamy sensuality and psychological drama, and you’ve got a story by Claire Cray.

Enter the Rafflecopter Giveaway for a chance to win 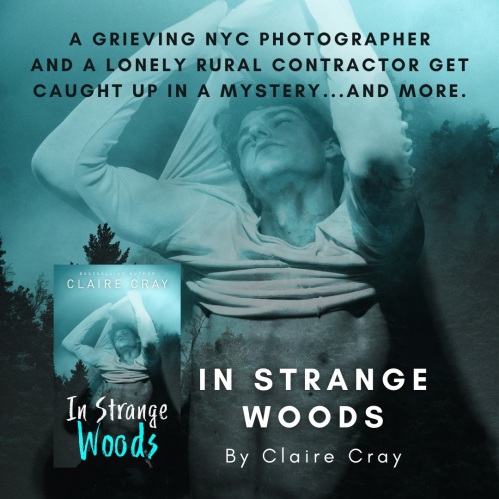 When his wealthy family are murdered, heir to their fortune James Worthington Crane looks to disappear to escape both the horror of what had happened and also the press’s relentless speculation that he was somehow involved. He chooses to retreat to a small Oregon coastal town where he has inherited some property. Yet as soon as James arrives he finds himself being mistaken for someone else. Initially drawn to the mystery surrounding his doppelgänger, James finds himself accepting the help of local man Hunter Quaid. As quickly as Hunter is drawn into James’s world of secrets and betrayals, the two men find themselves falling for each other. Yet the key to their happy ending will be to uncover the truth about James’s past before it catches up with him.

I really enjoyed reading In Strange Woods. I love a good murder mystery, especially the unsolved kind. James is a likeable yet flawed main character. Understandably when he is first introduced he is spiralling in a downward arch due to the loss of his family and the horrible situation of being the prime suspect in their murders. He often gets drunk, but ironically it’s how he meets Hunter for the first time. What I really liked about their pairing is that despite being very different characters, their common interests meant that they really worked well together. Hunter is the quiet, more softly spoken of the two and his calmer personality has a positive influence on James, especially in his more out of control moments. The romance takes time to develop, which I appreciated and even at the end there was some doubt as to whether or not they would actually get together. This made it much more believable.

The mystery was intriguing and I liked the way the author set it up so there really wasn’t any suspects in the murders mentioned, leaving me just as baffled as James was as to why his family were killed. It was also cleverly written so I didn’t think for a moment that James was actually behind it after all. When the truth was finally revealed, it was done in such a way that I just had to keep turning each page to find out what would happen next.

If you love a slow building romance and an intriguing mystery then I cannot recommend In Strange Woods enough!