Title: A Sacrament of Sin

Working as a paranormal private investigator has its trials. I’m busy, which is excellent, but there are more people, alive and otherwise, after me than ever before. The Other Side has stepped up their game. The Fallen are trying to strong-arm me into joining their ranks; they feel I’m the perfect person to aid in their eventual rise to world power, and they don’t give a damn what I have to say about it. Then there’s the Catholic Church. Apparently, they’ve painted a giant bullseye on my back. That keeps you looking over your shoulder, I’ll tell you.

Oh, and did I mention the bastard who abandoned my mother and me when I was born wants to repair a relationship we never had in the first place?

Just another day in the life of Rian MacCaren—that’s me, by the way. I solve mysteries, and I see things… things other people don’t. First, dreams plagued me. Now they’ve escalated to visions. Aside from keeping myself alive, my next step is to use my gift, or curse however you want to look at it, to figure out who killed the woman we just discovered in the basement of an abandoned house. Who was she, and why is she dressed in a wedding gown?

I heard laughter from the other side of the screen. It wasn’t the kind that speaks of madness, but the evil supervillain type. While I love the sound of truth, this sound chilled me to the bones and left me unclean.

“Sister Catherine…I should’ve known. As for you, my little angel, I’ll send you back to heaven.”

A ripping sound hit my ears as a clawed hand burst through the screen and wrapped around my neck. It pulled me through the wall that divided the confessional. I tried to struggle out of its grip, but the preacher held on for all he’s worth. Yeah, that’s gonna leave a mark.

I kicked at his face in the hope he’d release his hold over my throat. “Sorry, but choking isn’t my thing.”

The priest slammed me against the wall, knocking what air I did have out of my lungs in one exhale. I switched the safety off my gun and tried to raise it. Let me tell you that trying to fight for your life while being choked wasn’t that easy. I tried, though. Look at me being all optimistic and shit.

The father saw the gun. His eyes widened in anger as if the weapon was an insult to the sanctuary of the church. I may have had a gun, but I wasn’t a pedophile molesting kids and stealing their life force from them. Nope, I was a simple angel trying to get by in the world. By get by, I mean shoot the bad guy and rescue the children, thereby being the hero that saves the day.

Whoever the priest had become gripped me harder and threw me through the confessional door with one movement. The cracking of the wood against my back hurt, and the sound of screaming reached my ears. What hurt the most was hitting the floor and sliding across the carpet. I also heard the sound of my gun as it fell from my hand, bumping into something.

Movement from in front of me caught my attention. I attempted to get up, but the ceiling above me spun like a top, and vertigo kept me from moving too much. Massaging my neck, I could breathe easier, but the joy of still being alive didn’t last long.

There he stood. The possessed priest looked like a devil out of a bad CW series. Both his arms stretched longer than natural and ended in clawed, veiny hands. The skin on his face looked tighter and a bit like leather. The look someone gets after they tan in one of those cancer coffins too long. 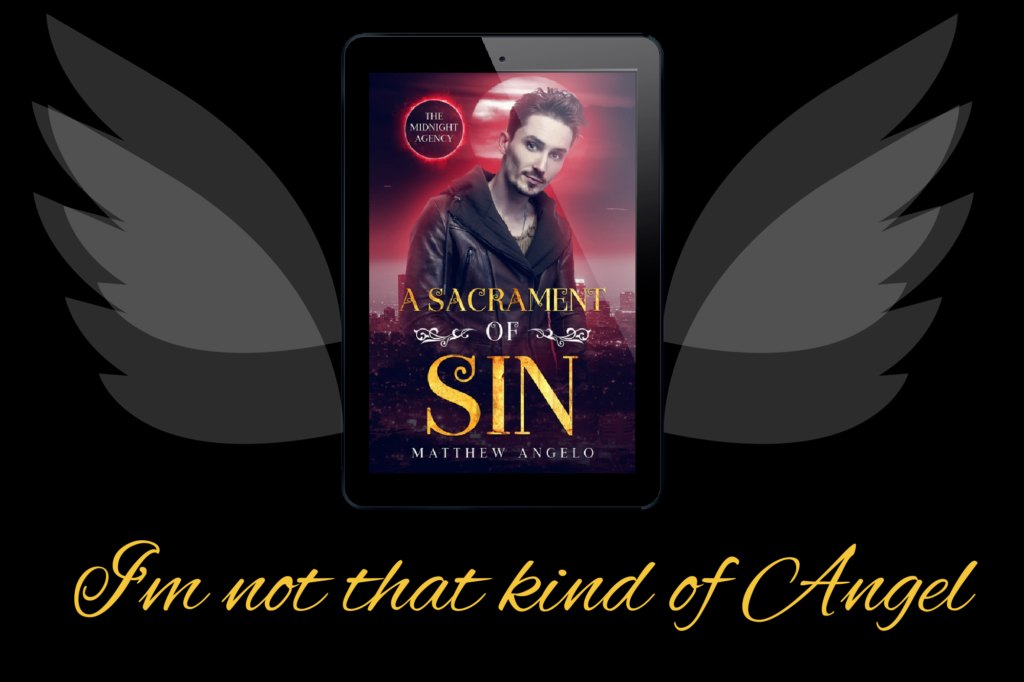 Matthew Angelo is a part-time writer, dog trainer, and photo enthusiast in the Northern Colorado area. In his free time, providing he has any, he practices Krav Maga, reads, and continues writing. He has written fantasy, science fiction, and urban fantasy stories amongst others.