It is a standalone story and does not end on a cliffhanger.

Mongrel, a creature more wolf than man, leads a lonely life on the fringes of pack society—until the night a handsome vampire shows up with a mysterious request.

Bowie—a vampire cursed to a life of endless nights—maintains close ties with his human family. When young girls in their village go missing, he must act quickly. But to find them, he’ll need to convince the local werewolf pack to loan him their best tracker—a wolf known as the Mongrel.

Though he hates the slur, Andras is used to being called Mongrel. When Bowie refuses to refer to him by anything but his given name, Andras can’t help a flicker of unexpected trust toward the stranger. He volunteers to help Bowie, risking banishment.

Can two tender-hearted men overcome their traumatic pasts and work together to rescue the girls before it’s too late? Or will the world’s most prolific killer snuff the flames of their passion along with the lives of her captives?

This steamy love story spans the country of Hungary as Andras and Bowie journey through cities and wilderness on their quest to right a killer’s wicked wrongs. Mongrel features a sweetly possessive werewolf, a cinnamon roll of a vampire, and the worst serial killer in history. A surprisingly fluffy MM Paranormal/Historical Romance considering the subject matter.

HEA guaranteed with loads of laughs along the way and no cliffhanger ending!

I watch the ground pass by beneath my paws rather than risk meeting the eyes of the other wolves. They probably aren’t looking anyway, having better things to do than greet the mongrel, even on a full moon. I’ve spent so long pretending not to care it’s almost worked. Who needs them? Not me.

I give a full-body shake to settle my fur how I like it and amble toward the heart of the village, a cool night breeze keeping me company. The chattering of insects pings from the forest beyond a row of humble cottages as I continue past.

Anticipating tonight’s run has me eager. I imagine the frantic heartbeat of my prey as I target my dinner. Pent-up energy dances in my muscles, tickling every nerve and rumbling in my chest.

I love the hunt. Nothing else in my life brings the satisfaction I take from stalking, chasing, and tearing into my prize. It’s one of the few activities where the others tolerate my presence. Though they’ll never admit I’m the better predator, they’re always willing to devour the feast I provide.

Only Ava treats me as equal. She’s too old and frail to hunt for herself these days, but I’ll be sure to bring her a choice portion. Nothing beats a fresh meal, and she deserves the pleasure more than anyone.

It wasn’t always like this. I had friends once when childhood still sang with innocence and the world had yet to slam its doors on me. But remembering better times only brings sorrow, so I move forward to whatever tonight might hold.

Voices sound from fifty paces ahead. Odd because most of the pack would normally have shifted by dusk. Among them, a voice I don’t recognize floats to my ears.

“I must speak with your alpha,” says a smooth tenor, calm, though his timbre vibrates with urgency. “The matter is vital.”

Risking an upward glance, I scan the gathering. Jolan and Ozor, the pack’s enforcers, stand in their human forms facing the speaker, both tense and braced for a fight. But the stranger’s posture isn’t threatening. He’s neat, wearing charcoal stockings under a crisp blue tunic. Knee-high black boots gleam with a recent polish. Spine straight, shoulders back, weight settled in the heels, not the toes. Nut-brown hair hangs tied at his nape, most of it hidden beneath a fashionable black hat. If his features weren’t puckered with annoyance, he might be handsome.

“We’re busy,” barks Ozor. “Or hadn’t you noticed the moon? Come back another night.”

The stranger’s lips part, but before he can reply, Farkas storms through his front door.

Clad only in a pair of worn tan breeches, the pack alpha thunders down the porch stairs and into the commons. Even barefoot, Farkas is intimidating, towering head and shoulders over the others. His black eyes land on the stranger in a threatening glower, but the man isn’t shaken.

“You’re the alpha, I presume?” The stranger extends a hand, his movement graceful, as if he’s been invited to a friendly tea instead of invading hostile werewolf territory on a full moon.

Your kind. Wondering what that means, I inch forward so I can scent him for myself.

The stranger returns his arm to his side, fingers curled but not fisted. “And you have my apologies, but this couldn’t be avoided.” His eyebrows arch as he inclines his head. “We must speak.”

I sniff the air. His scent is masked by soaps. Lavender was used for his clothes, rose for his skin and hair, but beneath the added fragrance lies the spiced scent of blood—his own, yes, but also…someone else’s? That’s odd.

“Then speak,” growls Farkas. “What do you want from me, vampire?”

A vampire! I’ve never seen one before. He looks so…human. Fragile. Not what I’d expect of a blood-drinking night terror at all.

Lee Colgin has loved vampires since she read Dracula on a hot, sunny beach at 13 years old. She lives in North Carolina with lots of dogs and her husband. No, he’s not a vampire, but she loves him anyway. Lee likes to workout so she can eat the maximum amount of cookies with her pizza. Ask her how much she can bench press.

for a chance to win

an ebook Bundle of the Immortal Jewels Series (three books) 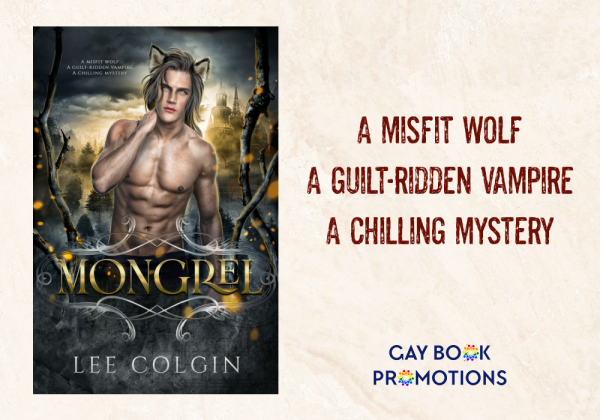 Young girls in his village are going missing and vampire Bowie, who has closer ties to humans that his own kind, is determined to find them and the person behind it. To do this he must approach the local werewolf pack and convince them to loan him their best tracker.

Andras is used to being an outcast. Called Mongrel by his own kind, he jumps at the chance to help Bowie and be free of his pack, even for a little while. When Bowie insists on calling him by his true name, a bond begins to develop between them. As they explore their growing feelings, their search to find the missing girls suddenly takes on a personal urgency. Can Andras and Bowie find them before it’s too late?

I loved reading Mongrel. The characters of Andras and Bowie were well-developed and had so much depth that I immediately fell in love with them. Their feelings for each other were very sweet and time was taken to craft a deep and meaningful relationship between the two.

The novel’s backdrop was perfect for our heroes. Life in 1600s Hungary is hard and the dark and gritty realism really gave a raw edge to feelings each character had for the other. I loved the inclusion of the real-life serial killer and the author’s take on her.

The wonderful combination of the historical and paranormal makes Mongrel an amazing read. I recommend that you check it out!