Title: In the Trap

For Hazel, an introvert with a knack for people watching, campus life is awkward and hard and…lonely. That is, until she starts to let her guard down around her roommate, Maeve—who’s fun and has a wicked flair for drama. Could there be more than just a friendship here? Maybe. But Hazel has a lot of family trauma to work through before figuring out the other big parts of her life. For now, she’s just happy to have someone to talk to.

All seems to go well until a night in the Trap—the university’s green space—leads to a tense encounter with some drunk guys. When one of the guys ends up dead, Hazel is implicated, and she and Maeve set out to solve the crime before police can connect either of them to it. But how can two amateur sleuths put together a solid case to hand over to the police in time? By following the campus online diaries, that’s how.

Set at the beginning of the internet age, people are just starting to share all their deepest, darkest secrets via the World Wide Web, yet the assumption of online anonymity may be a critical mistake. As the perpetrator posts their criminal diary for public consumption, Hazel and Maeve scramble to use technology to piece together the murderer’s identity. Can they hack their way out of becoming suspects? And if so, could they ever go back to their boring majors?

In the Trap
Jessica Cranberry © 2022
All Rights Reserved

Bell-e-fon-taine. We soared past the exit in Aunt Liddy’s old Volvo station wagon, and I couldn’t read the sign any other way. Ohio had a couple of cities spelled one way but pronounced another. Bellefontaine was actually Bell Fountain. In Versailles, west of here, closer to the Indiana border, people called it Ver-sales. I didn’t know why; I wasn’t really from Ohio.

Aunt Liddy’s car was humid, just like outside. We drove a little to the middle and a little to the east. Dark clouds gathered. I could’ve said on the horizon, but Midwestern storms didn’t always work that way unless a tornado was coming. No. The clouds hung close, not a ways off. Their color changed, oppressive ash-gray shifting to ominous lead billows. The sky darkened so hard one might think the whole world was on fire.

With a crack and a flash of silver-white, raindrops fell thick and loud, pounding against the car. The storm’s beating percussion drowned out the sound of Aunt Liddy’s sappy oldies music, so much so she ended up clicking the station off. I cranked up the air conditioning to keep the windows from fogging up.

The windshield wipers went wild, swiping waves of water away as fast as possible. It reminded me of how Dad used to laugh when he told the story about helping Mom learn to drive. They were high-school sweethearts—of course. In the rain, she’d get lost in the tempo of the wipers and automatically steer the wheel to the rhythm. She’d swerve all over the road until he’d scoot in close and steady her hand, instructing her to look farther ahead, past the wiper blades.

“I better slow down,” Aunt Liddy mumbled to herself. Most people talked just to hear their own voices, but especially when they got nervous.

The car’s momentum slackened, but the road and our windshield still blurred with splashing water. I couldn’t see anything in front of us. Out the side-view window, everything was soaked in the deluge, a blurry, slushy mix of greens and grays.

“Should we pull over?” I asked.

Aunt Liddy chewed her lower lip by way of an answer, and the hairy mole on her chin twitched—in a good witch kind of way. She ran her hand through the cropped mop of curls on top of her head; she was in her early fifties and had already accepted a Golden Girls haircut into her life.

I could make out an elongated mound up ahead. “Looks like an underpass. We could pull over underneath.”

In seconds, our car slid under the shelter. The beating of the rain silenced for a moment. But Aunt Liddy didn’t stop; her knuckles turned white as she gripped the wheel, and we kept going.

“We’re not stopping,” she said as if I wasn’t already aware of her steadfast persistence to get me to college.

“There’s no timeline, Aunt Liddy. It’s the weekend. We can show up at the dorm whenever.”

This was our screwed-up version of a family motto. I wasn’t sure when or how it originated, but Fischers rarely deviated. We did what we thought we were supposed to do. No matter the warning signs, we pressed on.

The rain subsided a little; its pounding beat softened to a patter, and Aunt Liddy relaxed her shoulders. She punched the radio back on, and the soothing tones of “I Can See Clearly Now” filled the car.

As Aunt Liddy hummed along, I worried a hangnail on my thumb, savoring the little sting of pain. It reminded me who I was, where I was going, and that I was doing it alone. The road stayed slick with water and sounded like its own river as we drove over and through puddles.

Suddenly, a sharp bite stole my breath as I lurched forward in my seat, the seat belt digging into my collarbone and chest. Aunt Liddy put her arm in front of me as if that would be enough to stop my head splitting against the windshield. The dashboard was mere inches from crushing the bridge of my nose.

She stomped the brakes and yelled and cursed. Bright red taillights filled our windshield, sparkling and reflecting in the last of the raindrops that hadn’t been swiped away. The back of our car started to edge around. Back and forth, fishtailing as Aunt Liddy tried to gain control. Her face flushed pink, expression strained.

Life was supposed to flash in front of my eyes, but I hadn’t lived long enough for anything to really show up. I saw my mom smiling and heard my dad laughing, and nothing more. Were they—and everything they’d been through—all my life had amounted to?

Miraculously, Aunt Liddy steadied the car. She laid on the horn. It blared long and loud.

The truck in front of us was massive, with a set of mud flaps showing the curving silhouettes of two naked women. Classy. The truck driver stuck his middle finger out the window.

“Stupid dick.” Aunt Liddy drew in a deep breath. “He’s gonna get someone killed.” She turned to me. “I’m sorry. Are you okay, hun?”

I could barely breathe. My heartbeat pounded in my throat and ears. My eyes watered and felt as though they were barely in their sockets. But sure, I was fine and said as much. That stupid song continued. Its singer insisted life was all clear blue skies and obstacles could be seen from far off, which was a damn lie. Trucks came out of nowhere, and so did bad people. Red flags didn’t look like red flags until after the fact. 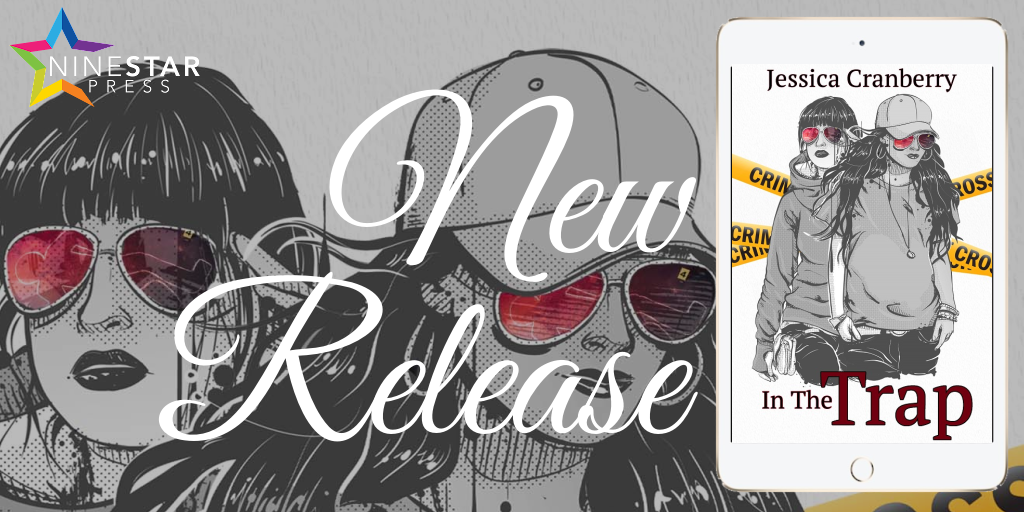 Jessica Cranberry lives in the Sierra Nevada foothills and spends most days striking a balance between parenthood, teaching, and writing suspense novels or eclectic short stories. Find out more on Jessica’s Website.

I thoroughly enjoyed reading In The Trap. It is set in the early 00’s – the era I was a teenager in – so I immediately felt a deeper connection to the characters as well as some great nostalgia for the early tech and the coming internet age!

Hazel’s standoffish mannerisms was something I could really emphasise with, and she needed someone like Maeve to draw her out of herself and encourage her to ‘put herself out there’. I liked how their friendship developed over the course of the novel rather than they just instantly hitting it off. Again, this added more depth and development to both characters.

There are hints that there may be more than friendship between them, but the first novel is focusing mainly on their developing friendship. I preferred this laying the groundwork approach rather than having the characters rush from not really liking each other, to friends and then to a relationship.

The mystery was intriguing and had enough plot twists to keep you guessing. Hazel’s connection to it increased the urgency behind their need to resolve it. The conclusion keeps you on the edge of your seat and wondering who – if any of them – will come out unscathed.

In The Trap is a great first novel in which promises to the be start of an excellent mystery series.

4 thoughts on “New Release Blitz and Review: In The Trap by Jessica Cranberry”