Title: The View From Olympus Mons

Nate and Craig are inseparable high school friends in spite of their social differences—Nate from a wealthy family, Craig struggling to support his drug-addicted mother.

The boys seal their friendship by burying a time capsule, a collection of childhood possessions representing their lives, swearing to unearth it thirty years hence. They look forward to the future with optimism, but when Nate declares his deep feelings for Craig, he’s rejected and circumstances part the two. Thirty years later, Craig is informed of Nate’s hospitalization in critical condition, the victim of a hate crime.

In the twenty-four hours Craig spends at his boyhood friend’s bedside, events which have shaped their lives over three decades unfold—Craig’s journey from poverty to respect as a computer scientist, through twenty years of unhappy marriage, to the late discovery of his true sexuality, while Nate is disowned by his family and forced to support himself by prostitution.

Though contact between them has been nil for thirty years, neither has been able to break the bond formed in their childhood—Craig unable to forgive himself for re-jecting his friend; Nate’s life and relationships ham-pered by his unending, unresolved love for Craig.

Ultimately, Craig will drive a frenzied 900 miles to find release from the guilt that has shadowed his life—back to the tree house where it all began.

The View from Olympus Mons
Barry Creyton © 2022
All Rights Reserved

Craig was early. He parked the SUV and sat contemplating the house he’d once called home.

July was warmer than usual, the sky clear, and twilight lent some enchantment to this row of houses on Cherry Street. All remained as determinedly cozy as they had been in the thirties when, in that sliver of affluence between the depression and the war, developers had smelled profit. The result was this stretch of sugar-candy houses that were snapped up by newlyweds, unaware that many of them would soon be separated by World War II.

Craig always thought the Tudor facade of his former home was a monument to kitsch, but he’d bowed to Janet’s passion to live within its deceitful walls. Twenty years ago, he’d bowed to all of her demands. Light from the cross-paned living room windows fanned across the lawn, hinting at warmth within. But there’d been little warmth here—with one exception: Madeleine.

Now a pretty, intelligent twenty-three, Maddy had organized this evening in hopes of—what? Certainly not a reconciliation. Ever the diplomat, the bridge-maker, Maddy wanted her parents to be friends. The ostensible excuse for the evening was the few possessions Craig had left behind two years ago when he’d abandoned this house and his marriage: a few old text books, some CDs of twentieth century French music, which he’d loved and Janet loathed, a stack of worn T-shirts, a pair of shabby jeans. Janet had dumped them into a waste bin in the garage when Craig left. Maddy packed them into neatly labeled boxes and used them as a ploy to get her father and mother to the same table.

He glanced at his watch, then turned the rearview mirror to check his appearance. There was evidence lately of his forty-five years. A frown line and small creases at the edges of his mouth indicated a determination to which he’d come late in life. And a little silver had appeared at his temples. His secretary deemed the streaks “distinguished.” Craig saw only the decline of his youth, misguided rather than misspent. His unemotional assessment of the status quo was interrupted by the chortle of a mockingbird hoping to attract a mate.

He took a bottle of red from the passenger seat, a Californian wine he knew Janet liked, and got out of the car. The path he walked was familiar, ringing the doorbell to request admission was not.

From inside, he heard Maddy call “I’ll get it!” A moment later the door opened. Maddy beamed. “Hey, you,” she whispered as she pulled him into the hall and hugged him tightly.

“Hey yourself, kiddo.” Craig nuzzled the top of her head with his chin. She took the wine without inspection and placed it on the hall console, then eased Craig out of his bomber and hung it up.

“You’re still movie star material and you know it.” She took his hand and led him into the living room. “Mom’s in the kitchen. Come on, I’ll make you a drink.”

He slipped an envelope from his jacket and dropped it on the table by the wine bottle, then walked the short hall to the living room. He took in the newly covered sofa and chairs. “Been some changes.”

Maddy looked around as if seeing the room for the first time. “I guess. I haven’t been back here for a couple of months.”

Craig stood uneasily, reluctant to make himself too comfortable as Madeleine poured vodka into a shaker. “How’s Danny?”

“His first is way up on the bestseller list. He should be very pleased with himself.”

Craig smiled. “He is, believe me.”

“And you should be proud of him! Has he let you see the new one?”

“He doesn’t want anyone to read a word until every last phrase is perfect.”

“Wow. He tackles the big ones!” She handed a martini to Craig. “Sit! You look as if you’re waiting for a train!”

Craig regarded the armchair, which had been exclusively his for so many years, and decided against it. He sat on the edge of the sofa, a stranger in the room he’d known so well for so long.

He watched as Maddy sank gracefully into an armchair. She wore a gray business suit, befitting her position as a rising ad exec, softened with a silk blouse in pale blue. She was pretty. That was beyond question—she’d inherited his wavy, pitch-black hair, his deep-brown eyes, but her mother’s high cheekbones and full lips. He was so proud of her. This urbane, attractive woman was the finest thing his marriage had produced. The only really happy thing. He sipped the martini, relaxing a little into the warmth it offered the pit in his gut.

Janet appeared in the doorway. “Dinner in ten.” No greeting, no smile.

“I brought some wine. It’s on the…” But Janet was gone.

Maddy smiled a sympathetic smile. Craig acknowledged this with a patient shrug. He took another look around the room and familiarity began to morph into claustrophobia.

Maddy reached for his glass. “Let me top that up.”

Craig shook his head. “I’ll have wine with dinner. So. Are you running the agency yet?”

“I’m working on it,” she said lightly.

“I’m working on it,” she repeated in exactly the same tone. Then she chuckled. “If it goes anywhere, you’ll be the first to know.”

Craig reached over and took her hand. “Don’t waste time, kiddo. We only get so much of it.”

Maddy was about to reply when Janet called them to dinner.

The predominant sound at the dining table was the clink of flatware on china. Maddy’s best intentions were being eroded by her mother’s grim silence. She started inconsequential topics—the new furniture covers, a group of Janet’s watercolors over the fireplace. Craig offered praise for the meal which he knew Janet had not exactly slaved over. Each foray into bonhomie drew a monosyllabic response from Janet. But then, dinner conversation was something this table had barely known during the final years of the marriage.

“I left the check on the hall table,” Craig said, breaking a longueur.

“You could’ve mailed it,” Janet allowed without looking at him.

“I thought, since I was coming by…”

Craig noted now that she seemed older than he remembered. Over the last couple of years, the pretty girl he’d met in twelfth grade had been completely absorbed into this rigid, unsmiling woman. She wore black jeans and a gray denim shirt, colors that compounded the aspect of severity, colors—or rather, noncolors—she would never have worn ten years ago. Her once luxuriant auburn hair was pulled back tight in a pony tail. There was no cynicism in Craig, but he surmised that her grim appearance was calculated. Remembering her talent for manipulation, he wouldn’t have been surprised if this was a tactic to exacerbate the guilt he already felt at the way their marriage had turned out.

Maddy kept the flow of conversation moving as brightly as possible to counter Janet’s silence. “So, what are you working on now?”

“We’re trying to increase the accuracy and performance of semantic parsing.”

“Once more for the layman.”

Craig smiled for the first time since they’d sat at the table. This was his field, his passion. “Okay, let’s see. You talk to your phone, your computer, your TV, Alexa, Siri. They talk back, answer questions. But, in spite of the label ‘Artificial Intelligence,’ what you hear is a collection of recorded syllables, short phrases, reassembled by computer to respond to what is understood of your query. So, what I’m aiming for—well, my team—is a program that can create an actual voice, construct phrases all by itself, learning new words, new colloquialisms each time you interact. And I don’t mean the kind of speech generator Stephen Hawking used, I mean speech that’s indistinguishable from human speech. The program learns, without human intervention, improves its own efficiency, and eventually, will even simulate emotion. What we’re aiming for is literal artificial intelligence.”

Maddy smiled and shook her head. “I hope I never have to ask Alexa to open the pod bay door.”

Janet folded her napkin and pushed her chair back from the table. “Someday,” she said with a smile, “one of your machines might teach you how to simulate emotion.”

Craig sounded no more than resigned. “This is uncomfortable. For all of us.”

“It was your daughter’s idea to get us together, not mine.”

“Maybe I should go.”

“Oh, finish your dinner! If this is what it takes to get the rest of your crap out of this house, eat.” She left the room, taking her wine glass with her.

Maddy offered Craig a sheepish shrug and a whispered, “Shit.” 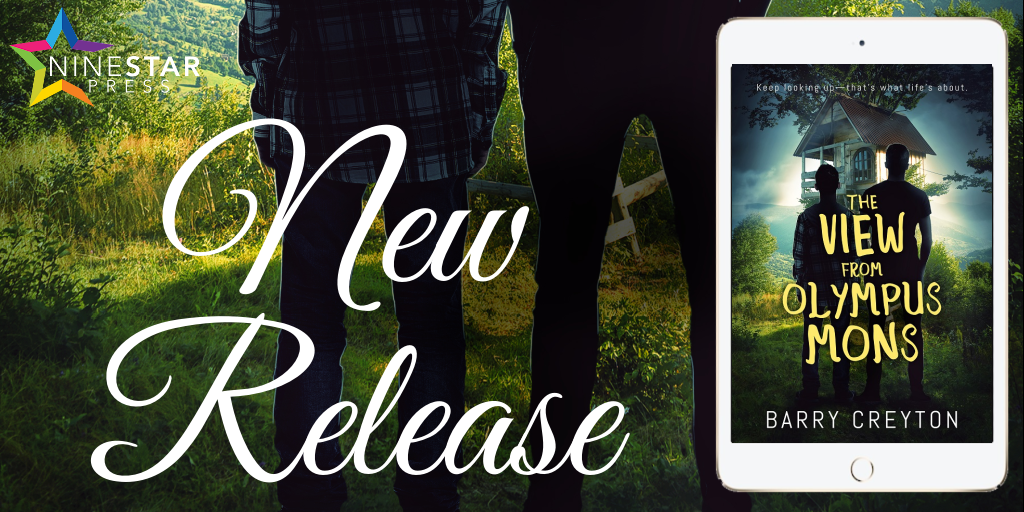 Barry Creyton has worked extensively in British and Australian theatre and television as actor, playwright and director. His plays are produced in more than twenty languages. Awards include the prestigious Kessell Award for his outstanding contributions to Australian theatre, the L.A. Ovation Award, and the Noel Coward International Writing Award. He resides in the United States. Visit Barry’s Website.