Conscience isn’t something all people are born with…

Gabriel Church is a portrait in contrast. It would be easy to get lost in his pale-blue eyes, ache with the need to feel the strength of his masculine frame. He appears to be nothing but animal and instinct. The only people who know the full depth of that truth are dead, murdered, or two thousand miles away.

Gabe is a serial killer, and for the first time in his life, he has more on his mind than his own survival. This time he is running from Seattle to protect the only person he thinks innocent in his laundry list of crime and murder: Christian Maxwell, his biographer and unexpected lover.

Drawn to a place he never thought to return, Gabe finds new and different realities. Realities that insist he let go of his tragic past, those incredible perceptions of God, and his own divinity. He must open his eyes to what the love of a good man can do to heal a broken soul.

Chapter One
When the killer Gabriel Lee Church pulled into town, the day was like any other. The traffic was heavy as morning commuters filled the routes and teemed into service roads like ants traveling in long foraging lines. As the vehicles inched forward and jockeyed and broke for entry into those faster lanes, one might’ve assumed there was a chaotic order to it all, a symphony of instruments working in tandem like a reflex arc operating without direction of a maestro. It seemed every car was speeding along at a harried pace to reach their jobs and appointments, but as hectic as it appeared, it never stopped the drivers and passengers from reaching for their cell phones, or tuning radios, or stuffing their faces with fresh, powdery donut treats while sipping their Starbucks coffees.

To his continued frustration, Gabe noticed the one thing drivers rarely used during their morning commute was blinkers, with few acting as if they remembered they even had them. He, on the other hand, always obeyed the rules of the roadway. No point evading police for murder if you were going to allow yourself to be hauled away because of a simple reckless driving charge. His stereo was on like many others, playing tunes from the eighties, which he’d grown to enjoy more than other shit he’d heard today. He didn’t like the rap influence in today’s pop hits. Give me an old James Taylor or Glen Campbell song. Now those were memorable. He didn’t have the radio tuned to any local station either, because he didn’t need to the hear traffic reports since he had nowhere pressing to be, nor anyone requiring an audience with him.

Gabe rarely had second thoughts about his nomadic lifestyle, although he regretted putting the Pacific Northwest in his rearview for more reasons than simply loss of beautiful scenery and the lonely, yet lovely stretches of endless highway. Leaving Seattle was harder than other cities he’d passed through because he had been forced to leave his writer behind. He hated abandoning Christian Maxwell. He’d actually grown quite fond of the man—someone who’d successfully slipped quietly into his life, and as surreptitiously into his bed, once he’d figured the story Chris was supposed to write was never, in fact, going to see the light of day. For all the good he’d found there, Seattle turned up only death and bad memories for him.

Or maybe it was another lie to tell one’s self. Another justification to say he needn’t make apologies, particularly when he knew Chris would be waking up alone in his bed. Clearly the writer wanted a relationship, but he would never understand the ramifications and the danger in that. Gabe never settled for too long anywhere, or with anyone. It seemed he was forever bound to be running from the law, as much as he was his own past.

Gabriel Church possessed a driver’s license, but it’d expired some ten years earlier. If the police stopped him, he’d flash it or one of the many false documents he’d gathered together over the long haul. They were simple guarantees for all the checkpoints and traffic stops he knew he’d have to make it past. But the Glock 9 mm really worried him more. He didn’t use guns very often, but one never knew what challenges lay in the path ahead, and he’d have been foolish not to carry something for every contingency. He acquired the weapon years earlier and carried it in his Dodge, snuggly buried under a corner of the interior’s loose nylon mat which’d come unglued at a spot just under his dashboard.

Amazingly, he’d successfully traveled across the United States many times in long, lazy passes headed nowhere in particular, and he’d never been arrested. He’d managed to talk his way out of every awkward intervention by the police. If they’d known who he was or what he was guilty of, their guns would have been pulled and stances taken in readiness of the kickback. He imagined he’d hear the screams from shaky officers demanding he drop to his knees atop the black asphalt as they withdrew handcuffs from tiny holders strapped to their belts. But Church had never been caught and always smiled back at the officers who ticketed him under his makeshift aliases. He would wave as he’d pull back into traffic and resume his speed, only to toss the crumpled tickets out his window a few miles farther down the highway. They were remnants of another warrant issued on his Joe Dirt personas from Idaho and Wyoming, supposedly traveling on business when they’d found the misfortune of changing lanes without a proper signal.

Gabe left the New Mexico border behind him the night before and was now traveling through San Antonio. Every joint in his body ached because he’d been stuck behind the wheel for over six hours. Leg muscles screamed at him over tiny twinges, alerting him he needed to stop soon and stretch his legs. He saw the fuel meter nearing empty and knew he needed to gas up as well. Just as his legs were begging for relief, his stomach began rumbling to life. Gabe needed to look for the nearest interstate diner. He’d been living on fast food burgers and convenient store burritos for far too long.

Seeing the familiar red roof of a Howard Johnson’s in the distance, he maneuvered his pickup to the far right and looked for the nearest exit off I-151. What do you get the man who has everything? Certainly his answer was fried clams. But then he realized the time of day. Too early for fried clams, so he chose instead to have a cup of coffee and a thick slab of chicken-fried steak. When he walked inside, the smell of food on the grill hit his nostrils, and he salivated. He’d forgotten how long it’d been since he’d had a good meal that hadn’t been served through a window.

As he waited near the entrance, a tiny waitress came bounding from the kitchen, stopping in her tracks when she spotted Gabe. Her mouth dropped open as she sized him top to bottom. Seeing an attractive man with no wife or babies in his arms must have given her some hope, he figured. Hope that the tip he left her was in direct relation to the number of flirtatious efforts she expended to receive it.

“Only one, darlin’?” she asked as she rushed up with another table’s meal teetering on her tray.

“Sure,” he said, nodding politely as she ushered him to what he’d assumed was one of her prized tables in the rear of the restaurant.

“Be right back, hon,” she said, passing busboys in the aisles. By the time she came back, she was already carrying a carafe of coffee with a single glass of ice water. Gabe mentioned with a grin how he didn’t really need a menu, and she leaned in just enough to allow her perfume to filter in.

“I only want chicken fried steak with whatever sides you think I deserve,” he said with a grin. His charm with the ladies came easy for him, and because it did, he’d gotten laid more in his lifetime than the typical male could boast too. And since he’d met Christian, he was no longer married to the notion of a single gender in the sack.

Christian Maxwell was the first man he ever fucked, but the experience felt natural in hindsight. It felt genuine in a way that should’ve surprised him more, though it didn’t; the bucking sweaty pleasure and explosive release of seed. Ever since he left Seattle, he’d been afforded the time to think how nice it could’ve been to have him reclining in the passenger seat beside him. If only for the company and long conversations they could’ve had.

“Right away darlin’,” she said as she slipped back toward the kitchen.

Gabe watched her walk away and saw how his waitress, Alethea, pointed him out to nearby female staffers by the area where the coffee makers sat. He winked and heard faint girlish laughter issuing from behind the counter as each one surveyed him. He knew his eyes and his physique attracted women. He wasn’t metrosexual and cultivated, so he wasn’t always sure why others found him so sexually attractive. Gabe wore faded flannel and dusty work boots in lieu of the polished, esthetic sensibilities of a man obsessed with his own image. 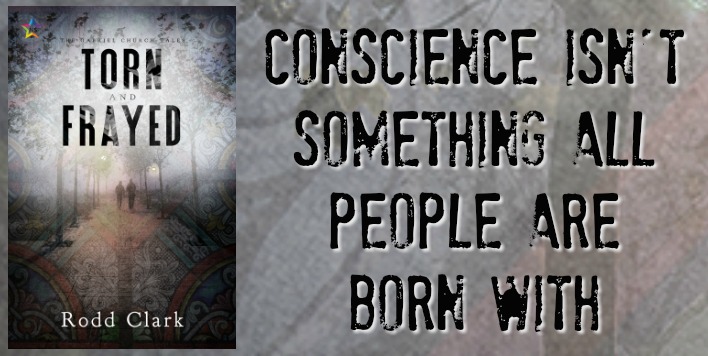 Rodd lives in Dallas, TX and can be reached through his web presence at RoddClark.com.

If you were to ask him, he would say that enjoys M/M mysteries and suspenseful romance mixed in with his thrills. “Give me a good ole spy novel or fantasy to keep me up at night,” he might add. When he isn’t writing or reading, he claims to be the zookeeper of his menagerie of critters who call his place home. From cats to dogs to friendly raccoons, he enjoys them all.

With a dark and distinctively disturbing voice, his characters are flawed but intriguing; such as the main character of Gabriel Church in his romantic fiction series The Gabriel Church Tales, which begins with Rubble and the Wreckage.