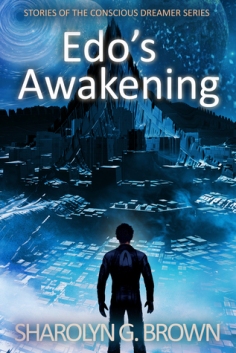 Edo is a Dream Traveler on the verge of completing his mission from his gods, and ascending to the next caste. However, when things go wrong with his mission on Earth, Edo is held responsible for this potential failure. As punishment, he’s stripped of his caste privileges. Edo, who only knows life as a Traveler, quickly finds himself at the mercy of his Helper, Danyu, for assistance navigating this new world.

As he spends time in Danyu’s world, Edo sees a side of life in the compound that’s foreign to him. Though Danyu tries to keep him in the dark about what’s happening, the little he does see makes him question his own life. Once he starts to question everything he’s believed was true, can Edo go back to being who he was before his punishment?

This novella takes place before the events in The Heaviness of Knowing and can be read as a standalone novel.

Edo’s Awakening is a companion novella to The Conscious Dreamer Series and events within this novella take place before The Heaviness of Knowing, which is the first book in the series.

In Edo’s Awakening, dream traveller Edo is tasked with assisting his Earth connection Liam in the building of test rockets. His work is overseen by The Keepers whom he believes are Gods and must be obeyed without question. Edo is one of the best travellers and he is confident that he will complete his mission. However when he finds himself unable to make contact with Liam, Edo is called in front of The Keepers’ Representatives where he learns that the test rocket killed an Earthling thus putting his entire mission in jeopardy. If Liam fails on Earth then Edo will die. Until he can re-establish a connection with Liam, Edo finds himself stripped of his caste and forced into manual labour as punishment for the failure. Forced to rely completely on his helper, Danyu, Edo begins to discover the truth about The Keepers and the secret resistance that is building against them.

I really enjoyed learning how Edo discovered the truth about The Keepers. He is one of my favourite characters in the series so it was great to read his backstory and discover more about his past. The novella also gave some more information of the early days of the resistance as well as setting things up nicely for the first novel in the series. I had great sympathy for Edo throughout the novella. His dedication and fear of The Keepers was very well conveyed and you really got a sense of how completely in control they were despite them being more of a passive threat rather than ever present.

Edo’s Awakening is a great read. It’s fast-paced and gripping right from the first page, and serves as an excellent introduction to The Conscious Dreamer series.