Series: The Escape Trilogy, Book One

Andrew is a vampire from New Orleans, exiled to a tropical island in the 1800s as punishment for his human bloodlust. During a storm, a ship crashes off shore. After rescuing a sailor from the cannibals native to the land, Andrew becomes fascinated with his brilliant, beautiful new companion, Edmund.

Edmund is a British naturalist who has sailed the world seeking new species. Intrigued by creatures that might kill him, immortal Andrew is this scientist’s dream-but so is making his way back home. Edmund will fight to survive, even while wrapped in the arms of a monster.

As light touches and laughter turn to something much more passionate, the cannibals creep ever closer to Edmund. Can the ancient vampire keep his human alive long enough to escape exile and explore their newfound love, or will Andrew’s bloodlust seal his own doom?

Chapter One
The crack as the hull breaks echoes across the beach, into the woods, and inside my head as I try to sleep. I was just beginning to dream of New Orleans. I almost smelled whiskey and muddy streets—almost. Instead, I jolt awake, still surrounded by the fresh flowery scent of this blasted tropical island in the middle of… Well, I don’t know really. That’s the point of exile.

I pull on a worn linen shirt. For the first few months here, I slept with my clothes on in case the cannibals came knocking. They never did. I think they knew this strange white man would make a disgusting meal. As if they could smell death on me. I wonder if eating my flesh could actually kill them. Wouldn’t mind offering a bite if only for some entertainment. I haven’t watched a human die in ages, but now, here we go: a shipwreck. There’s bound to be death in abundance tonight.

It’s not raining when I step outside my house. Yes, I have a small house on a tropical island in the middle of the ocean, overrun with cannibals and all manner of man-eating beasts. Michelle wasn’t that cruel when she sent me here. She did provide me with a home. Congratulations, you heartless bitch, you gave me a house in which to spend eternity alone.

I didn’t even mean to kill that last human back home in Louisiana.

Or maybe I did.

A leathery leaf to the face brings me back to the present as I stomp in tall boots through thick foliage. Despite the lack of rain now falling on my island, a flash of lightning illuminates the beach ahead long enough for me to see them—the natives who’ve managed to steal so many meals from me.

The irony would make me crack a smile if not for my ever-growing bitterness. I once considered capturing a cannibal, but then, they might come hunting me and I’m not half as strong as I once was. And I don’t think Michelle means to leave me here forever. I must wait out her overblown sense of justice.

From where I stand, sheltered behind a fence of palms, I see remnants of a great ship washing to shore. Thunder cracks as a man screams. My focus darts toward the dancing orange light of the native’s torches, and I see but outlines of their naked bodies as they tug and pull on a creature wrapped in white fabric. I squint and identify a man in his sleeping clothes. Dinner is served.

My gaze skims the beach, but it’s mostly detritus and dead men. Dead men are no good to me as their blood is most certainly not part of my unique diet. Oh, but then, there’s a scent on the wind. There is something alive nearby, and it’s bleeding. The smell of blood mixes with the salt of the sea and bitter stress-sweat.

I hone my senses to find the source of blood, but it’s been so long. Once a master, my hunting skills are now out of practice. I take a step back into the jungle and move to my right, away from the dancing torches and the man’s screams, and almost trip over a body. Out of practice is apparently a gross understatement as he was near me this whole time.

Unlike his soon to be devoured compatriot, this man is fully clothed in a coat and trousers. His hair is dark, and he wears black gloves. He’s but a shadow on the sand as I lift him and carry him farther into the woods.

Finally, a meal they won’t steal from me.

Safely inside my little house, I lay the man on the floor and poke at the fire until it roars like the thunder outside. Now, it rains. The ocean storm falls heavy, rocks on the roof, and an animal howls nearby, woken wet from its slumber.

I peel off his soaked clothes as the wound on his head continues to bleed. Unconscious, it’s a wonder he wasn’t pulled away by the current to die in the arms of some mythical mermaid. As I look at him in the firelight, I realize he is indeed a wonder. Perhaps it’s been too long since I’ve felt another man’s skin, but perhaps not. This injured sailor might be beautiful.

Looking at his hairless face, I would have guessed him barely a man. The thick muscles of his chest, arms, and legs dictate otherwise, as do the calluses on his hands. Not only is he a full-grown man, but he’s also a man who works hard. He is lean with hair the color of the ocean on a moonless night—and if I don’t stop his head bleeding, my curse of nothing but dead flesh could continue.

I move him, naked and dry, to my bed and cover him in blankets before wetting a cloth and wiping his wound. It’s a sizeable gash high on his forehead. The dark creature inside me wrestles at the sight of his blood, but I woo it with promises of later, later.

I hold the rag to his head and realize I have no bandages. It’s not as though I need them. I’ll just have to sit here then. I perch on the side of my bed, and my thumb touches his bottom lip. Like a sunrise, this man is becoming more beautiful by the minute. I want to ravage him. I push the blankets away enough to run my hand over his chest. An angry scrape mars the pale skin, and I bet my guest will be covered in bruises by morning. The sea is not a gentle mistress. I know. I’ve tried to escape my exile by swimming out into white waves to no avail. The crushing currents always bring me back.

A log pops in the fire as the rain continues. My house now smells of smoke, mud, and him. I climb farther into the bed and recline at his side. I still hold the cloth to his head as I wrap him in my arms and run my nose up the side of his neck.

I think Michelle would be angry to see how happy I am. 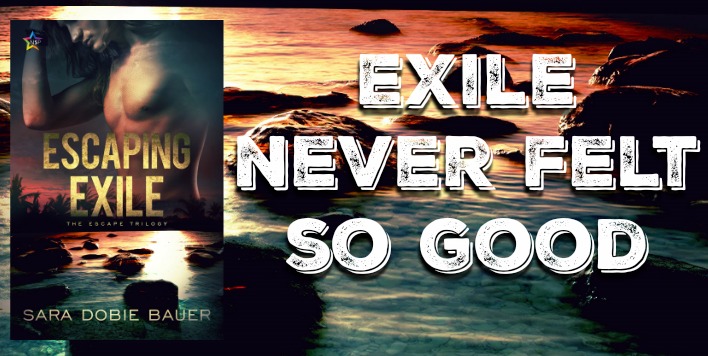 Sara Dobie Bauer is a bestselling author, model, and mental health / LGBTQ advocate with a creative writing degree from Ohio University. Twice nominated for the Pushcart Prize, she lives with her hottie husband and two precious pups in Northeast Ohio, although she’d really like to live in a Tim Burton film. She is author of the paranormal rom-com Bite Somebody series, among others sexy things.