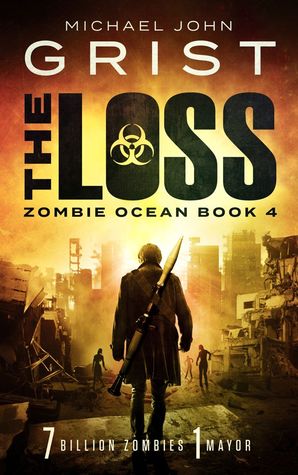 A riveting zombie thriller like you’ve never read before.

Ten years after the zombie apocalypse destroyed civilization, ‘Last Mayor of America’ Amo faces the loss of everything he’s built.
He wants to be a good man. He wants to save his people. But what is good, and who are his people any more?
Now the demon is coming.
He will save or break the world.

‘The Stand’ meets the zombie apocalypse, packed with gore, twists and heart-stopping chills.

The Loss is the fourth novel in the Zombie Ocean series. Set ten years after the zombie apocalypse that destroyed most of Earth’s human population, Amo and the other survivors face a new threat that could well be the end of them all.

I really enjoyed returning to Michael John Grist’s Zombie Ocean series. Ten years have passed in the series since the third novel and the survivors have been doing their best to rebuild New LA. Characters have grown and changed, gone from strength to strength and it was great to see just how even the minor players had developed. The action is as fast-paced as ever and the description used does a terrific job of immersing you into the world that the author has created. I very much liked how the zombies are still an integral part of the story and were not side-lined in the face of the new threat.

The Loss is an excellent continuation to the series and I very much look forward to reading the fifth novel.