Title: Where the Night Reigns

Series: In the Darkness, Book Three

The barrier between worlds has shattered. Demons wreak havoc across Earth; the dead are rising from their graves; psychics and witches are vanishing without a trace. The fate of the world rests in the hands of the enigmatic Tresser Corporation, a company of demon soldiers… and a kindergarten teacher.

When hunter, David Tresser, pairs up with a High Demon, he knows he’s in over his head. Of course, there are worse positions to be in, like Henry, whose girlfriend hasn’t been seen since the demonic attacks began, or the psychic Cassandra, who has become a target of those very demons herself. As this motley crew teams up, trust is slow to be gained…but they really have no choice when the world around them is falling apart at the seams. In the midst of it all, Tresser finds himself curiously drawn to the demon he’s not even sure he can trust.

After an exorcism gone terribly wrong, the team is left with no choice. To save their worlds, and themselves, they’ll have to travel into the darkest part of Hell: the Pits of Gehenna, from which no one has ever returned.

To defeat the odds and preserve humanity, they’ll all have to work together.

Where the Night Reigns
Emilie Lucadamo © 2019
All Rights Reserved

The tea has long since gone cold, but Tresser swirls it around his cup anyway. He’s not about to take a sip. It is far too frigid, and the last thing he wants to do is wind up spewing liquid over all this cozy living room upholstery.

At least that might give his host a valid excuse to kick him out. Then again, Cassandra Carlyle might be too damn nice—or too appeased by the Tresser Corporation’s considerable paycheck—to do it.

It’s obvious Cassandra isn’t happy having him here. That could have something to do with the fact that Tresser pulled up unannounced in front of her pleasant country home in a hearse.

(The ride is none-too-inconspicuous. His father had been adamant against it. Naturally, that’s why Tresser had to have it. It’s proved itself useful in carting around things such as equipment or bodies and has the most comfortable reclining seats.)

To be fair to her, Cassandra has taken it in stride. She let Tresser in, made him tea, and when he said they needed to talk, her reply was a gamely, “I’ve got the time.”

It’s still obvious she doesn’t want him here. Her wary gaze keeps flickering to Tresser’s dark boots like she expects them to leave oily imprints on the carpet. Her posture is a bit too relaxed, and her smile a bit too pleasant for her to be genuinely pleased with the company. Despite this, Tresser is impressed. Cassandra is good at concealing her displeasure under a veneer of easygoing friendliness. If figuring out what people are hiding weren’t his job, Tresser would never have known the difference.

“I’m not sure what to say, Mr. Tresser,” Cassandra sighs. Her fingers are wrapped around her teacup, violet painted nails stark against the white porcelain. “It’s all a lot to handle.”

If anyone can handle the chaos their world is descending into, Tresser is sure it will be Cassandra. The woman has already figured out how to deal with him. If she’s that good, she could probably walk through fire and brimstone without flinching.

“I’ve had to perform more exorcisms in the past few weeks than in ten years. News outlets are losing their heads. Buildings are being destroyed, people are dying, and our city is at the epicenter of it all.” She swallows, gaze flickering down for a second, and Tresser knows she wants to say something critical. She swallows it back at the last moment, however, settling for a mild but pointed, “It’s a good thing Tresser Corporation is here to take care of it.”

Except Tresser Corporation isn’t, not really. If the Corps were really focused on this tiny Rhode Island city, barely a speck on the map, then the problem would be over with by now. Men in black suits and sunglasses would swarm the streets; news outlets would be silent on the chaos, and common mediums wouldn’t be the ones performing exorcisms.

Tresser Corporation is currently focused on some tiny European country, which is being controlled by a dictator possessed by a demon of Ars Goetia lore. This wouldn’t be a major cause for concern, except the dictator has nukes, and that’s the sort of apocalypse even the Corps aren’t equipped to deal with. As long as the war in Hell stays mostly confined to Hell, Felix Tresser declared, it wasn’t any of their business. So instead of centering his focus on the tiny city literally crumbling to hell, he jetted off to Europe and sent a handful of his agents down to deal with it.

The crisis proved to be more than the agents were equipped to deal with, however. Only a week later, chaotic mission reports were being sent back to Felix—details of demonic possessions and people coming back from the dead. It became clear this was far more serious than it appeared on the surface.

That was when Tresser received the command to get down to Rhode Island and see what was what. This order came in the form of an e-mail—since his father was clearly too busy to call—with the mission reports attached.

Tresser wishes he could say he’s surprised, but after twenty-six years he knows the way his father’s world works.

More surprising, he supposes, is the fact that his father trusted him enough to place him in charge of this operation at all. Had this come at any other time, Felix would have handled something of this magnitude himself. Instead, he’s been forced to appoint his son, and Tresser would be lying if he said he was prepared. He’s led missions before, but nothing like this.

A part of him had no clue where to start, so as soon as he got into town he went for the obvious—a list of Tresser Corps’ contacts throughout the city. He found two names, and Cassandra Carlyle was the first on his list.

“I need you,” he said as soon as he sat down with the psychic, “to explain exactly what the hell’s been going on here.”

Now, with Cassandra wrapping up her sordid tale—full of destruction, chaos, and more demons than an exorcist could shake a cross at—Tresser wonders again whether he’s in over his head.

He’s as good at hiding his discontent as Cassandra is, if not better (years of dealing with his father has given him time to practice). Sure, in his rumpled jeans and leather jacket Tresser might not look the part of a typical Corps agent, he’s got his own brain behind him—plus, an abundance of resources to work with. A lot can be said about David Tresser, but only one person has ever dared call him incompetent, and that man just put him in charge of saving this entire city.

And, if what Cassandra is telling him is true, maybe the world. But Felix doesn’t need to know that until later.

As Cassandra finally falls silent, the expression on her face is clear: expectant. Tresser has said he’s here to help, and Cassandra is trusting him to do just that.

He knows exactly where to start.

“Okay,” Tresser says, clapping his hands together in a faux-eager gesture that makes Cassandra grimace. “I guess this makes you my eyes and ears.”

Cassandra blinks. Of all the things she may have expected, that wasn’t one of them. “I’m…sorry? What are you talking about?”

“You. You’re a psychic, and a medium. That makes you doubly qualified to give me the information I need to know.” Tresser Corps employs psychics for just this purpose; during a mission, they can be crucial for obtaining information that would otherwise have remained unknown. If Cassandra weren’t skilled, the Corps would never have bothered with her. “You’re going to help me out.”

“Mr. Tresser—” Cassandra begins, but Tresser cuts her off as he stands up.

“That’s my father. If you have to be formal, Tresser works just fine. Drop the ‘mister’, I’m not your boss.”

Cassandra follows him as he makes his way to the door. “I think I’m just confused about what you’re asking.”

“Great!” Tresser claps the woman on the shoulder—and, realizing at the last moment that he’s still holding the teacup, presses it back into her hands. “I’ll call you later. Sometime. Wait for me. Tresser Corporations thanks you for your assistance!”

The last comment is smarmy enough to make his father proud. Tresser has read the script enough times to know what to say when making an associate do something they might not want to do. He isn’t taking advantage of Cassandra; he just needs a psychic’s insight, and she’s been helpful so far.

She’s getting paid. She’ll get over it.

Tresser strides out the front door before Cassandra can get another word in. He’s not halfway down the walkway before the door slams shut behind him, loud enough to make the windows shake. Tresser springs a foot into the air, landing hard and casting an incredulous look back at the house. No way was that his fault, and he’s sure Cassandra didn’t do it.

He shakes his head as he double-times it towards his hearse. Damn mediums—always living in haunted houses. 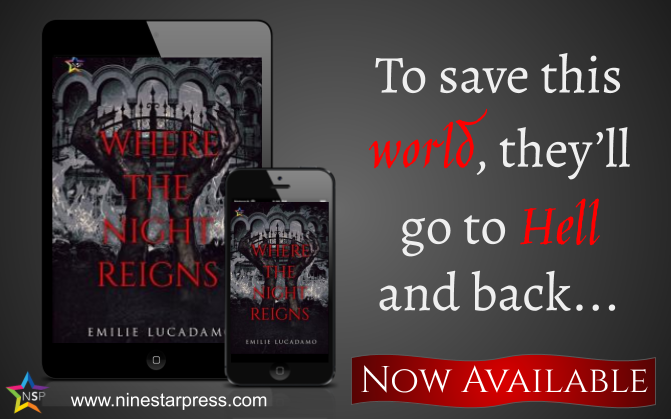 Emilie Lucadamo has too many stories, and not enough words to tell them. At eighteen years old, she has been writing for most of her life, and telling stories even longer. Her dream is to one day become a critically acclaimed author. When not writing, she’s probably reading, or spending quality time with her dog.

One thought on “Book Blitz: Where the Night Reigns by Emilie Lucadamo”