Title: Through the Tears

Series: Torn Between Worlds, Book One

Huge, horrid creatures with a taste for human flesh have been invading Seacliff Manor and its surrounding lands for years. Ghouls are coming from another world through portals made of magic. No one knows why or how, but nothing good ever comes with them.

During a hunting trip, Eamon encounters one such monster and falls through a portal into the ghoul’s hellacious desert home world. Separated from his home, his friends, and his lover, with no magic of his own and no sign of other life, Eamon expects to die there…until an encounter with a lone stranger gives him hope. There is a way home. But can Eamon survive alone in ghoul-infested terrain long enough to get there?

Worlds away, the Lord of Seacliff Manor is determined to bring Eamon home. Despite all evidence to the contrary, Rafe knows his human lover is alive. It’s just a matter of finding out where. To that end, Rafe has a plan. It’s dangerous, perhaps even suicidal, but he’ll do anything to save the man he loves.

From different sides of the galaxy, the lovers fight monsters and seek magic with one goal in mind: reunion. Monsters aren’t the only things they’ll have to defeat to find their way back to each other, and the horrors uncovered along the way may be more than they can handle.

Through the Tears
Leigh M. Lorien © 2019
All Rights Reserved

The body lay at the base of a maple tree in a crumpled heap of leathery gray flesh and black blood. Rafe studied it for a long time. Its fanged mouth hung open, eyes like black marbles gazing lifelessly at him, hands with hawk-like talons curled into loose fists in the grass. It was more than capable of killing a human—gods, it was probably capable of killing him. He turned away, forcing down the momentary surge of fear as he took in the scene, playing through the information he had.

Eamon, Lionel, Rose, and Tuomas had been hunting that morning, as Eamon had said they planned to do. Lionel was training a new bird. They were well armed. No one left the stronghold unarmed these days. Ghoul incursions were growing more frequent, and the filthy things were getting bolder by the day. Rafe had wanted to send an escort with them but let his lover talk him out of it. We’ll be fine. We’re barely going past the village.

But they weren’t fine. Lionel’s bird didn’t return when it should have. The ghoul had crept up on them while they were distracted.

Signs of the struggle were obvious all around the body. Broken twigs, displaced leaves, mud spatters up the trunks of the trees. The humans had come out victorious. Three of them had, anyway.

Thirty or so feet beyond the ghoul’s body, a cliff dropped into the sea. Ignoring his audience—the three humans who’d returned, as well as two of his rin retainers—Rafe walked past the ghoul’s corpse, inspecting the grass between the site of the attack and the edge of the cliff. Clods of soil lay in heaps where massive claws had raked it up. He wished there was some indication of Eamon’s movements, but the ghoul’s weight and erratic assault covered all sign of his human lover. Blood spatters painted the grass black. Rafe didn’t need to touch or taste the drying liquid to know it was not human. Not Eamon’s. The rotten stench of ghoul blood was as foul as raw sewage and, for once, he envied the humans their inferior senses. Someone had hurt it, and badly, right here. Eamon was not a close-quarters fighter. He was barely a fighter at all. If Rafe were a gambler, he’d put his money on Lionel and the longsword he wore.

“You say he fell,” Rafe stated. It wasn’t a question. Rose had spoken for the group, told their story in a quavering voice. If the two men were hoping Rafe would show mercy to a teary-eyed woman and thus to them as well, they were all mistaken.

“Yes, Lord,” Rose said. “Th-the ghoul tackled him, and they rolled, and…I’m not certain, I mean I-I didn’t see it myself, Lord, but…Eamon was gone when…”

Rafe walked to the very edge of the cliff and leaned forward to look down, grateful for an excuse to breathe air untainted by blood. The tension level behind him rose tangibly, but no one rushed forward to drag him back. He was their lord, not a child to be scolded for putting himself in danger. Hundreds of feet below, waves crashed and roared over a beach of jagged stone. Even with his sensitive rin hearing, little more than the faintest whisper reached Rafe’s ears from this distance. There was no question that a fall from this height meant no survival for a human. No matter what awaited at the end of the fall, no matter how strong the human.

He had not felt Eamon die. Rafe had never had a bound companion die, so, he didn’t know from experience what it would feel like, but he’d heard others speak of it. He’d expected something…worse. He should have experienced fear as Eamon fell, pain as he crashed to the ground and his body shattered against the rocks below. It would have dropped him to his knees, put him in a state of shock.

Instead, there was a sharp surprise, fear, and then…an absence. Eamon simply was not there. He wasn’t alive, but neither was he dead.

“You are aware Eamon is bound to me?” Rafe turned to the humans, and they all bowed their heads, nodding and avoiding his eyes. “You should have protected him.”

The wind off the sea howled and whipped his dark hair around his head. Everything was cast in a dusky gray—the winter sun had not shown its face for days, and the choppy sea below was the color of cold steel. Standing at least a head taller than the tallest of the three humans, Rafe was no stranger to intimidation tactics. It wasn’t his preferred modus operandi—physical threats were so pedestrian—but it was easy, and with the gaping absence of Eamon distracting him, it was all he managed.

“I’m sure they did their best, my lord,” Kiran, his retainer, said softly.

Rafe continued to aim a cold gaze at the humans.

“I’m sure. Have search parties organized. Comb the beach and the forest in this area. I did not feel him die.” And if he was mistaken and Eamon was dead…The words hurt as they formed in his mind, but he forced them out. “If you find him, or his body, bring him home.”

Kiran bowed his head and rushed toward the manor to find willing and able individuals to carry out the command. Wind continued to buffet Rafe’s side and face, tangling his hair as it whipped around. In his imagination, Eamon was scolding him as he worked a brush through Rafe’s hair as he did every night. Would it kill you to tie your hair back once in a while? It’s like you tangle it on purpose.

If it weren’t tangled, I wouldn’t need you to brush it, would I? Rafe would reply and grin in the mirror at his lover. The thought of the familiar teasing almost made him smile. Almost.

“M-my lord,” Tuomas ventured, stepping forward as Rafe returned to the ghoul’s body. “We would like to join the search parties, if we may.”

Rafe shook his head. “No. Take this body to the manor. Have it burned.”

The three humans exchanged wide-eyed glances. The ghoul was larger than all three of them combined. Heavy as it was, it would take them hours to drag it to the manor. It seemed a mild punishment in Rafe’s eyes, for letting his lover fall over a cliff.

Tuomas and Lionel were unbound and had been for as long as Rafe had known them. Rose was bound to Elena, the manor’s doctor, and lived in the manor with her, while the two human men lived in the village outside the manor walls—together, if Rafe was not mistaken. Eamon had lived with Tuomas for some time, until he came to Rafe’s attention, and still spent the night in Tuomas’s village home on occasion. Perhaps it was cruel to punish the three of them in any way for what had happened. They were likely hurting as much as Rafe, but they were not bound to Eamon. They could not feel his absence, like the loss of a limb or an eye or an ear, like a crushing emptiness where, until mere hours ago, there had been a warm, bright presence every day for the past ten years.

“Stay with them,” Rafe instructed his second retainer, Orienna. “See that we lose no one else to rogue ghouls today.”

The woman bowed. “What of you, my lord?”

“I’m in a mood to rip something’s throat out,” he said coldly. “Let the filth try.” 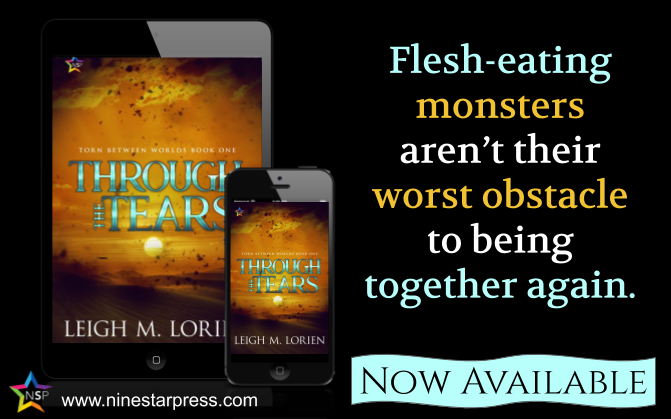 Leigh M. Lorien is a queer author who got her start at the tender age of five, writing and illustrating her own Sonic the Hedgehog stories. Fortunately, her writing has improved in the subsequent decades. Nowadays, Leigh’s stories primarily lean toward science fiction, fantasy, and urban fantasy, but she has had some contemporary pieces sneak out of her head. Regardless of genre, her books will usually include sarcasm, strong relationships (romantic and platonic), polyamory/non-monogamy, magic, music, animals, mental illness, and less-frequently-represented queer identities.

When she’s not writing, Leigh enjoys gardening, photography, travel, music, Renaissance festivals, doing hair-color experiments in her bathroom, and going on any kind of adventure involving the outdoors (unless it’s cold, screw that). If you want to know her better or see pictures of her many fur-children, she’s most active on Twitter and Instagram.