Title: Waking Up the Sun

When Lander accepts a dare to go into the forest at night, he thinks it’ll be easy. He just needs to walk in and then come out, right? But that’s easier said than done. It’s like the trees have a mind of their own, and they are stopping him from finding his way back. There were always stories of people getting lost forever in the forest, but Lander had never considered they might be true.

Yban has been in the forest a long time and he knows it like no other—but he comes with his own secrets. He disappears every day, and he won’t tell Lander where he goes. But during the dark hours, Lander gets to know him and starts unwrapping the layers that surround him.

The fire that keeps them warm in the forest isn’t the only spark between them; will their growing relationship survive Lander’s determination to find the way out, or will Yban’s past mistakes keep them hidden in the forest forever?

Waking Up the Sun
Laura Bailo © 2019
All Rights Reserved

“He’ll be hiding under his bed, the coward.”

“Did you see his face when you dared him? I’m sure he peed his pants just thinking about it.”

The men standing on the road—a few feet away from where Lander stood—started laughing and clapping one another on the back. He was sure they didn’t know he was there, not that it would have mattered to them. He was familiar enough with the things they were saying about him.

Earlier that afternoon, they’d seen him studying and started on their usual abuse. Lander could generally tune them out easily enough, but he’d had an argument with his parents that morning and he’d already been on edge. So when they’d told him he wouldn’t dare to go into the forest alone, his stubborn streak had shown up, and he’d set out to prove them wrong. Of course, then they’d changed their terms and dared him to go into the forest at night.

Lander was determined to prove to them he could do it. All his life, he had only wanted to fit in with the other kids, but he had always been the outsider, the weird kid no one wanted to play with, the one always left alone. He’d longed for company, for someone to share his time with, and instead he’d encountered barbs and jabs directed his way just because he was a bit different. In the end, being alone was safer, and he’d grown used to it. But there was still a small part of him that wanted to belong to a group, and it was that part that had risen to the bait when they’d made their way towards him, so confident in their abuse that he couldn’t help but take them up on it, even though he knew it would be a mistake.

He took a deep breath and stepped out of the shadows, feeling a vindictive pleasure at seeing the surprise on their faces. They truly hadn’t expected him to come.

“Well, well, well… Look who decided to show up after all. Have you come to tell us to stop wasting our time and just go home?” One of them sneered at Lander, and his resolve doubled.

Lander made sure to keep his head high and not to let his voice tremble when he answered. “I’m here to go into the forest. That’s what you wanted, isn’t it?”

They shared a few confused looks, probably not knowing what to make of this version of Lander, the one who was actually standing up to them. After a moment, the leader just shrugged and started walking. He was used to his little band following him without question and clearly expected Lander to do the same. Lander wanted to get this over with, so this time he did what the leader wanted without complaint.

They walked like soldiers, the blustering young men from before he’d made his appearance all but gone. Lander guessed it was probably a habit they had picked up from their training—they’d all shown an affinity for offensive magic and had started training with the guards the year before. Lander had an affinity for healing magic, but his talent was not important enough that any of the village healers wanted to take him on as an apprentice, so he’d been studying and trying to learn everything he could on his own. Not that he would ever be a doctor, but he wanted to help, and healing magic could be useful in a lot of different ways people didn’t often think about. He’d had many arguments with his parents about that very topic, including the one that led to him following this group to the edge of the forest.

He’d never been so close to this place. He’d seen it, even studied it from afar, but he’d never stepped a foot into the tree line. As far as he knew, no one in the village had. Ever since he was little, he’d listened to people telling stories about the forest, stories designed to scare little kids. And as he grew up, he could tell that the kids weren’t the only ones afraid of the forest. Everyone feared the darkness. No one dared go into it, not even during the day. He had always wondered why because he didn’t think the stories about ghosts and the forest making people disappear were true. But apparently he was about to find out if there was any truth to them.

The four trainees were looking at him with smug smiles, and he would have liked nothing better than to wipe them off their faces. But he was not stupid enough to go against four men, especially not trained ones. However, there was another way for him to stop them from smiling; it just involved him going somewhere no one had ventured in ages, a place he had been taught to fear since he was old enough to sleep in a bed instead of a cot.

Lander refused to let them see his fear, so he steeled himself and walked to the edge of the forest, looking in. He could see only the trees, since the world between them was made of shadows.

“Step in and then come out, right?”

The four of them looked at him expectantly, probably waiting for him to turn around and run back to the city. There was no chance of that happening now.

As always, it was their leader who spoke. “Yes. But not just stepping into the edge. You need to go far enough that we don’t see you anymore. We’ll tell you when that is. And then you can come back, and we’ll never call you a coward again.”

Lander nodded and approached the edge of the tree line slowly. With a small step, he was inside the forest. He breathed in the smell of the trees, the wildlife, and the darkness, getting overwhelmed with so many new scents. He didn’t look back but, instead, kept walking until the darkness surrounded him. There must have been noises in the forest, but his heart was beating so hard that the only thing he could hear was the sound of it drumming inside his chest. He looked back then, intending to ask if this was far enough—he should have known they wouldn’t say anything—but the tree line had disappeared. 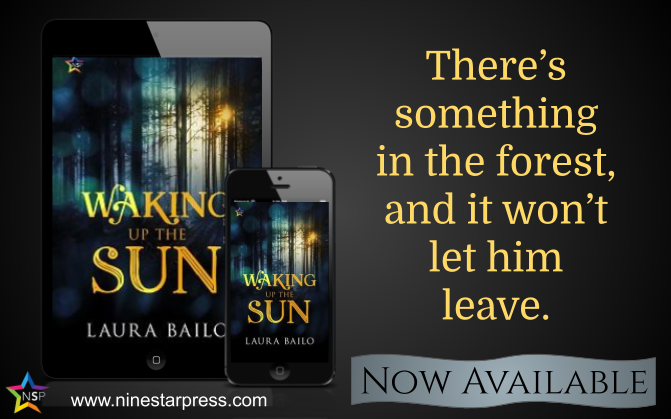 Laura Bailo is an asexual Spanish author of queer romance. She’s an anxiety-ridden writer who, when not writing or reading, loves exploring the narrow streets of Pamplona and thinking about all the stories she wants to write in the future. She has a penchant for writing sweet stories with a Spanish flavor, be it fantasy or contemporary, and she’s still dreaming about writing her first historical.