Nulani, Ashua, and Silna are alien soulmates on the run from their oppressive homeworld. When their past catches up to them, they find themselves lost and separated on a deadly jungle planet. To survive, they’ll have to face everything—from floral reptiles to pain-eating scientists—with only their wits and mind-altering music on their sides.

But they soon learn they aren’t the only ones in need of rescue. An underground laboratory houses genetically altered superweapon Kozrin, who is not only a reminder of the war they left behind…but is also their soulmate!

Can this ragtag group of polyamorous space pirates reunite, rescue their new love, and escape this deadly planet alive?

The most refreshing part of Nulani’s night was not having to worry about how to break into a spaceship. Teleporters always made her stomach roil, and docking a ship in the enemy’s hangar with enough firepower to walk out unscathed never got old. Too bad no one wanted to give her a blaster though.

“You’d get distracted testing how explosive everything is,” Ashua grumbled sarcastically. He kept eyeing the ceiling of their narrow hallway as if he expected there to be a Psyren-sized vent for them to climb through. “I vote we try staying focused on the mission, for once?”

“You say that as if focus and fun are mutually exclusive, darling dearest,” Silna chided them from a few feet ahead. From behind, danger was hidden in her beautiful silhouette, swaying as if she were navigating an ocean of people at a ball instead of sneaking through an enemy vessel.

Silna covered one mouth with a delicate hand as she laughed. The other mouth on her face, covering where her eyes once were, emitted a high-pitched note she used for echolocation. “We have a small squad of soldiers ahead. I believe…four Solavis? Three in bipedal armor, one in octopedal. Who shall do the honors?”

“I’d say a close-quarters firefight in the hallway would solve our problems quite nicely, wouldn’t you?” Ashua asked with a pointed gaze at Nulani.

Three grins spread across Nulani’s face. “I would. Though I still wish I had a blaster to join the fun with. Oh well. Get ready to back me up.”

Nulani took the lead as the others fell in line behind her. Footsteps approached around the corner of the hallway, metallic clinks indicative of Solavian armor. Solavi were liquid aliens the color of the stars they were born under, and they often wore intricate armor in order to give themselves solid forms for interacting with others. Military Solavi had weaponry incorporated into their designs, but they never bothered with one feature that would’ve saved their lives: earplugs.

A song swelled in her chest, heart racing in time to an imagined beat. Nulani’s face seemed to split as she opened three mouths—one natural, the other two carved across her cheeks so many years ago. She considered unzipping her spacesuit and revealing the final mouth across her stomach, long and jagged thanks to its creation by a sword slash, but decided she had no reason to reveal all her tricks yet.

The footfalls grew closer; the Solavi would find the Psyrens any moment if they weren’t distracted soon. Nulani would’ve loved to see the betrayed look on their faces, but she had mates to keep safe instead of taking risks alone. Better to skip the fun and get the fight out of the way now.

She took three deep breaths and then sang, her taunting soprano joined by Silna’s sultry alto and Ashua’s bitter baritone. The clash of metal and blaster fire punctuated their notes. The footfalls in the hallway fell silent.

Nulani dropped her song from two mouths, keeping her main one vocal as she ventured around the corner. Golden Solavian corpses dripped out of the intricate silver frames of their armor. A still-smoking blaster floated what had once been the body of its wielder, now reduced to a mere puddle. Having expected this carnage, Nulani scooped up the weapon as she finished her song. Silna already had a handkerchief on hand for her to clean the weapon with.

“Bad blood between crewmates is such a pity,” Nulani stated with faux-innocence.

“A shame indeed,” Ashua agreed, trying to avoid stepping in the puddles. “I pray we never turn on each other this way.”

Silna took no such care, striding through the liquid corpses as she stated, “Bondmates can never turn on each other. If a harmony breaks, then by definition, it’s not a harmony at all. Don’t you agree?”

Nulani refrained from answering. Despite her partner’s years as the actress of their covert operations and a debutante before they’d even met, her sultriness hid a core of romantic naivety that refused to be crushed by reality. Nulani looked to Ashua to see if the group cynic felt the same, but he shrugged and turned away. He of all people knew how powerful a bond could be, having been the one to accidentally Harmonize with Nulani and Silna instead of assassinating them as he’d been ordered to do.

Pretending to be oblivious to their silence, Silna continued, “With that confirmed, tell me, is this the right way to the bridge? Those intercoms cannot spread our songs if we aren’t there to sing in the first place.”

Nulani tried to leave the silence behind with the dead Solavians. Worries about their triad being more fragile than the others believed clung to her ribs and threatened to constrict her lungs. Their union hadn’t been planned, but it had been enforced. Nulani had once been a soldier and Silna an ambassador, but fate and the failed assassination by Ashua had brought them into the fold of their home planet’s government, used as secret operatives throughout their small cluster of the galaxy. Military squads were made up of Harmonized groups, their songs and their will to fight both stronger in order to keep their mates alive, and the more secretive agencies had later used their bond in much the same way.

They were free now, which hadn’t gone according to plan either—anyone who saw the mouth replacing Silna’s eye sockets would see proof. Working for pirates gave them a chance to escape their old captors, but they were still functioning out of employer-induced necessity. What would happen when they weren’t kept together by a larger entity looming over their lives? Would shared experience and a heartfelt song be enough to keep them together?

Nulani hadn’t realized how quiet she’d been while on autopilot until a hand ruffled her hair, then trailed along her face. She absently batted it away. “What, did I miss something?”

“Not at all. You were so quiet, I wanted to make sure you hadn’t been abducted and replaced by a Nulani-sized robot when I wasn’t listening.” Silna planted a kiss on one of Nulani’s cheek-mouths, which she gladly reciprocated. “What troubles you, my love?”

“Big things. You know, what the future holds and so on. Stuff to talk about after we crash this junkheap into the nearest asteroid field.”

“Then let’s focus on the present part and get to hijacking.” Ever practical, Ashua already had the map on his wrist-computer up and ready to go, a collection of blinking lights signifying the locations of the other crewmates. “Captain’s about to reach the main floor. We should be at the intercoms already.”

Nulani convinced her mouths to breathe in sync as she checked the map again. Her mates were right. The future wouldn’t happen if they botched the present at hand “I can make us a shortcut. Trust me?”

Ashua nodded. “Likewise. Unless your plan is to use your blaster on the ceiling?”

“Lucky guess.” She pumped the blaster up to full power and fired. 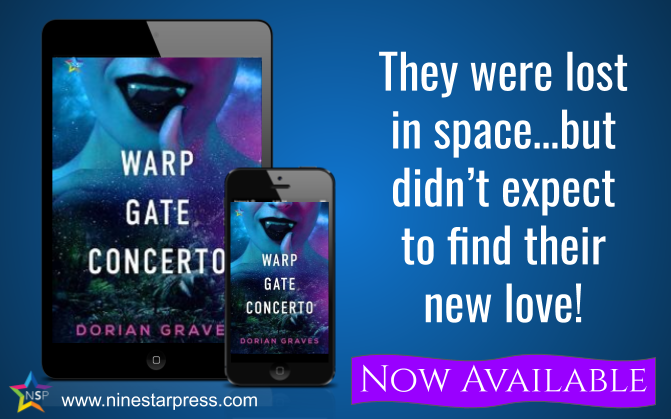 Much like Sasquatch and other local cryptids, Dorian Graves can supposedly be found in the woods of the Pacific Northwest. Few have ever seen Dorian, but investigators have found trails of plot notes scribbled on receipt paper if they followed the distant sounds of old Blue Öyster Cult albums long enough. There have also been reports of Dorian lurking around the Mills College campus in Oakland, CA, where Dorian was last seen scurrying away with a B.A. in English/Creative Writing. Dorian occasionally crawls out of the woodworks with offerings of fiction, strange and fantastical stories with equal parts humor and horror, but often retreats quickly unless bribed with coffee and bad puns.

When not writing or working “the other day job,” Dorian lives with a romantic partner and a mischievous cat. Dorian Graves can be convinced to sit still if given art supplies, games of all sorts, or a selection from the ever-growing TBR pile. Dorian can be more reliably found on http://www.doriangraves.com, where one can find artwork, fiction, and whatever inane topic Dorian feels like rambling about this week.