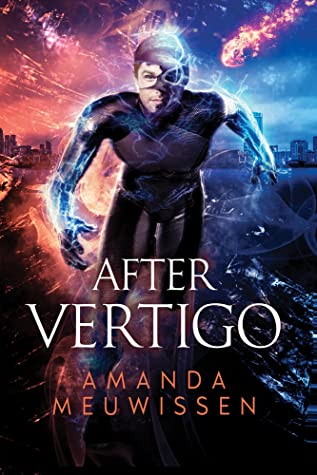 In a flash, the world changed. A solar flare—later dubbed Vertigo—activated the DNA of more than half the world’s people, granting them special abilities. Brilliant scientist Benjamin Krane might be Powerless, but his inventions are the only thing giving the police a fighting chance against super-powered evil. Ben doesn’t have much of a life beyond work, and when he gets wind of a robbery one evening, he decides to test his newest invention personally….

A thief, rogue, and shameless flirt, Grey Miller—aka the Streak—likes shiny things, but he doesn’t hurt people. When Ben catches him—and proposes they team up against the real bad guys—Grey doesn’t know whether it’s the offer or the man he can’t resist. But one thing’s for sure—they’re an ideal match in more ways than one.

With a psychotic supervillain’s catastrophic plan moving forward and everyone he cares about in danger, now might not be the best time for Ben to give in to Grey’s seduction, no matter how tempting. Grey is a man of secrets, and if Ben wants a future with him, he’ll have to learn to trust Grey—and himself.

When a freak event alters the DNA of over half of the world’s population, the police find themselves in danger of becoming overwhelmed against those with their newfound abilities and bad intentions. Scientist Benjamin Krane creates inventions to combat these powers. When he decides one night to test out a new invention in person, he finds himself teaming up with a super, despite having no powers himself. However his unexpected teammate Grey Miller – the Streak – seems more interested in flirting with Ben than saving the day. Yet when a supervillain emerges, Ben and Grey must learn to trust each other if they want to thwart the villain’s evil plan.

This a really fun and fast-paced superhero novel. The two main characters, Ben and Grey, are very likeable and intriguing in their own ways. Ben is extremely intelligent, but he struggles to make connections with people and before meeting Grey he kept mainly to himself. Grey is self-assured and extremely outgoing, however he has his secrets. The two of them are complete opposites, but this is why they work so well together. Each personality complements the other.

The writing itself is great. Everything flows well and I love Grey’s wit and sense of humour, even if Ben sometimes doesn’t appreciate it! The pace is quick enough to keep the story moving, but not at all rushed. It’s extremely clever how seemingly insignificant events feed into the plot and contribute to it until it all fits together at the end. The final confrontation is on the edge-of-your-seat stuff and it had me guessing right up until the last second!

3 thoughts on “Book Review: After Vertigo by Amanda Meuwissen”