Title: The Door and Other Uncanny Tales

Living paintings, spectral children, cannibal serial killers, lost souls, haunted houses, and ancient evil proliferate The Door and Other Uncanny Tales. Everywhere reality and fantasy collapse to create a new unstable world, even the body is not what it seems. Combined with Dmetri Kakmi’s gothic imagination and mordant humor, the result is fiction that is as memorable as it is unsettling.

This collection contains three new and three previously published stories, including the acclaimed Haunting Matilda, The Long Lonely Road and The Boy by the Gate.

The Door: Chapter One
“There now,” Orestes said, standing back to admire the painting.

It hung before him from a sturdy hook on the landing of the staircase leading from the darker downstairs part of the house to the lighter upstairs, with rows of small windows and the French doors that opened on a balcony, overlooking narrow Transom Street. This had been after all, in other times, an industrial area, filled with factories, abattoirs, noise, and the stench of hard labor in the shadow of the nearby Convent of the Good Shepherd, by the river. Now the suburb was gentrified and provided accommodation for the likes of himself, Orestes Gallanos, and his partner Simon Cole, artists both, living the inner-city dream in lofty warehouse spaces.

“There now,” Orestes repeated, casting an eye over the artwork he had labored upon for almost five months, in the garage turned studio with its stuffy air and bad light. He folded his arms across a narrow chest, tilted his head to the side, and stepped back to admire the results of his efforts. Not too far back because the hardwood landing was small and he risked falling down the steps to the polished concrete floor below.

It was a splendid work, even if he thought so himself. Very effective. It achieved exactly the outcome he aimed to produce in its creation all along.

It was a door painted with oil on linen. A life-size door, seven feet in height and three feet wide, with an old-fashioned handle that gave off a pleasing brass gleam. The square frosted glass panel above complemented two vertical panels below, and he had found that working with oil allowed him to capture perfectly the desired grain and texture of wood.

He descended the stairs and studied the painting from the entrance hall. From there, should a guest visit, the painting looked like a real door, complete with architrave and wooden step to complete the illusion. Only Orestes knew that, if he should by a miracle manage to open it, there would be nothing on the other side except plasterboard. A guest ascending the stairs and brushing by the painting would assume it was a real door, leading to, presumably, a newly built room on the other side.

At that moment, the front door opened behind Orestes and Simon came in, bringing with him a cold gust of July wind. His hair was cut short and newly dyed blond to accentuate the navy in his deep-set eyes.

“Hello,” Simon said, removing the black plastic raincoat and hanging it with a sprinkle of rainwater on the coat rack. “Why are you in the dark?”

It was four-thirty in the afternoon and almost pitch-black in the hallway. Orestes pointed wordlessly at the painting; a smile played on his lips.

“Oh,” Simon uttered, coming to stand beside him. “It’s terrific. It really is.” He gave Orestes a peck on the proffered cheek. “Congratulations. Are you pleased?”

“I think so…” Orestes cupped his chin and stared at his work for a while.

Simon stepped forward, rested both forearms on the staircase handrail, and gazed at the painting with a contented sigh. Orestes bathed in the way Simon was always so genuinely enthusiastic and encouraging about his work. It gave him confidence, made him feel he was worthwhile after all.

The electric light from upstairs streamed down and fell on the painting with intensity, making it resemble a well-lit stage, set for a play.

“Any moment now the door will open,” Orestes whispered behind Simon, “and the actors will step forward to pronounce the made-up lines meant for made-up lives.”

Simon’s smile was warm when he said, “That’s what I was thinking.” Then he caught the expression on Orestes’s face. “Something’s bothering you.”

“I wondered if I should have the door slightly open.”

Simon was also a painter, of a more esoteric order, and, although slightly younger than Orestes, had strong opinions on this sort of thing.

“No,” he cried, shaking his head and glancing at the painting as if he might have to fight for its right to remain as it was. “That’d be overemphasizing it. Glass is a kind of opening for one’s perceptions even though one’s body remains shut out.”

Orestes considered. “You’re right,” he said finally. “Glass lets your eye enter the other side, but only partially, since it’s not clear glass.”

“Oh, baby,” Simon cried, coming up to Orestes and catching his wiry form in his arms. “This can be the centerpiece for a series of trompe l’oeil for your next exhibition. Imagine a whole room!” Simon twirled happily around the floor with Orestes in his arms, smiling and pressing him to his body. The room spun with them, the glass bricks of the bathroom at one end and the darkness of the garage-studio at the other. “This calls for a celebration.”

“There’s a bottle of Taittinger in the fridge,” Orestes offered.

They went upstairs. Orestes popped the champagne bottle and poured the amber liquid in tall crystal flutes inherited from Simon’s mother, Orestes’s side being poorer and lacking in luxuries and good taste. After watching Laura with Gene Tierney for the umpteenth time, they made quiet, habitual love on the couch and much later still, after watching Farewell, My Lovely for the sixth time, they crossed to the bedroom and slept soundly in their double bed, behind an elaborate wooden Japanese screen.

In the long winter’s night, the building settled with a sigh around them. It resolved its sound angles and determined lines into a world filled with peculiar, shifting disturbances, some fleeting and others lasting, deep in the mortar and concrete of the century-old foundations. The last train raced by unnoticed on the raised tracks a block away, the procession of near-empty windows piercing the night like accusations. In the early hours of the morning, when traffic slowed on nearby Hoddle Street, only the icy wind was left to prowl the empty streets. It slid past the grille pulled over the sturdy front entrance, passed through the barely discernible crack under the door, and set out feelers toward the stairs, from there to reach the painted door with the frosted glass panel and the glistening doorknob. The painting showed faint in the cold silver of a night-light left on halfway down the stairs. If there was anyone at the top of the stairs at that hour, one would have been forgiven for thinking the door looked forlorn on the landing, where people pass but rarely stop. An invitation. 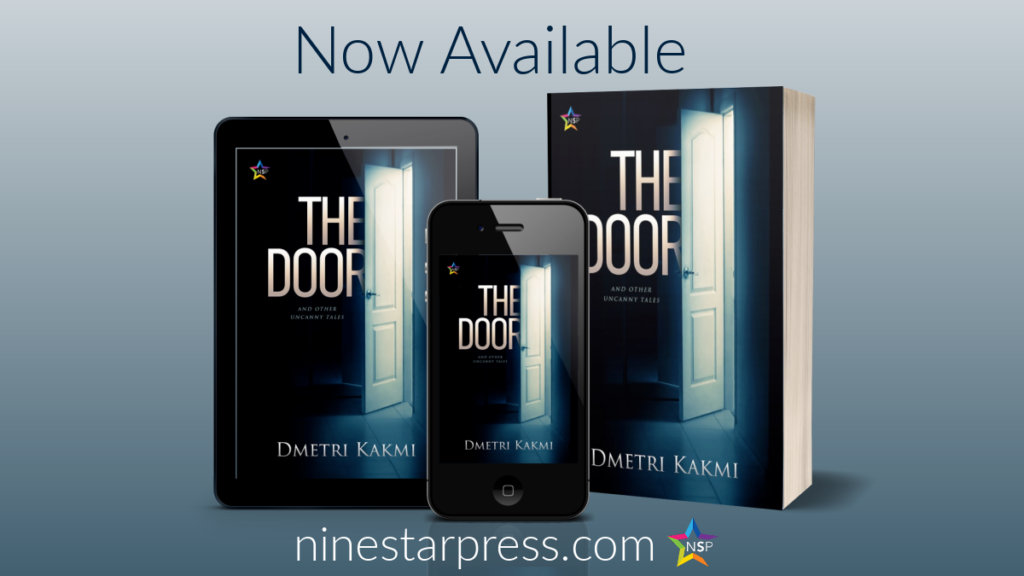 Dmetri Kakmi was born in Turkey to Greek parents. His fictionalized memoir Mother Land was shortlisted for the New South Wales Premier’s Literary Awards in Australia; and is published in England and Turkey. Dmetri also edited the acclaimed children’s anthology When We Were Young. His essays and short stories appear in anthologies. He lives in Melbourne, Australia.