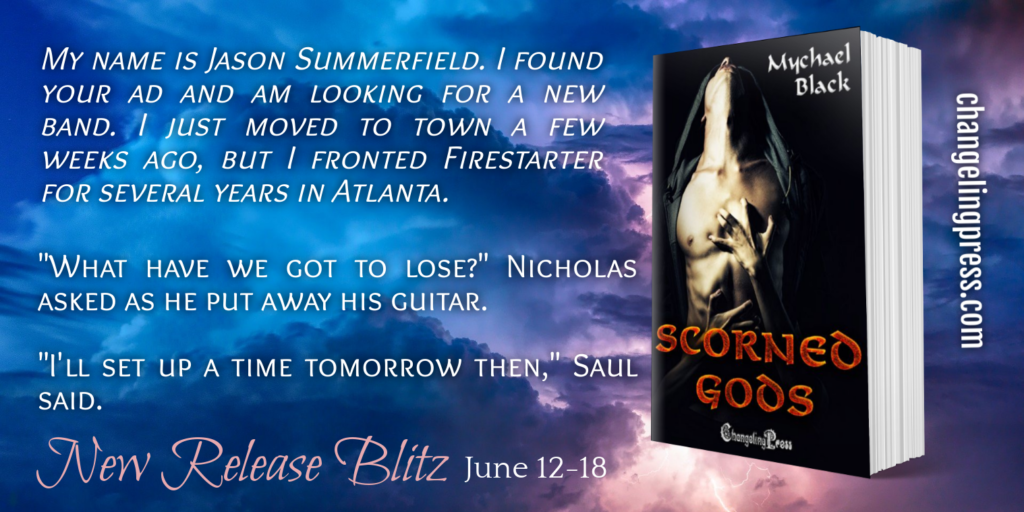 Music isn’t all that Scorned Gods has to offer.

Iconoclast (Scorned Gods 1): Death metal group Scorned Gods needs a new singer. Firestarter’s former lead singer Jason Summerfield and his lover Julian Kristados are back in the United States, and Jason is itching to get back on stage. What he gets, however, is far more than that — and not all of it is good.

Delirium (Scorned Gods 2): Jason and Julian have acquired a new lover, Scorned Gods’ bassist, Saul. But a cult of vampires is hell-bent on starting a war between mortals and vampires. Its first prime targets are psychic vampires like Jason’s bandmates…

Shackled (Scorned Gods 3): With help from an Abaddon ally, Jason and his bandmates will have to act quickly to stop Harlan Yates. The escaped mortal, Daniel, is the unwilling beacon that can bring destruction upon them all.

Karma’s Brutality (Scorned Gods 4): With their allies from Abaddon, Jason takes the fight directly to Yates. Jason and his bandmates from Scorned Gods are about to discover combat is not for the faint of heart. Not everyone will come out unscathed, but that’s the nature of war.

The door slammed shut, and Saul Calderon glanced at his bandmates. “Well, that was a waste of time. Now what?”

Twins Nicholas and Dana Reid both sighed, though Dana spoke up first. “Good riddance,” she said. “There are other singers — most with more talent than that jackass had. We can find someone.”

“Hopefully in enough time to actually learn the songs,” her brother grumbled.

Saul sat on the stool beside his amp, his bass resting on his lap. “Where do these fuckers come from? You’d think someone who claims to be a ‘big fan’ would actually know our songs.”

“Hell if I know,” Dana said with a shrug. She set her sticks on her snare and redid her fire-engine red ponytail. Although she and Nicholas were twins, they weren’t identical. She looked nothing like her brother. “We need… new blood.”

A shiver snaked its way up Saul’s spine. None of them had fed in a few days, and although they didn’t drink blood, the urge for it occasionally hit. Dana gave him a knowing look. She’d been the one to bring them together years ago. Back then, they’d only sensed kindred spirits who needed energy to survive. The music had been a happy accident. But even among vampires, their kind were pariahs. Rumors ran rampant about the band members’ true natures, though no one knew the exact truth. Sometimes, they tossed in a random blood feeding onstage just to drive the crowd wild, but Saul preferred tantric energy to blood any day.

Fingers snapped in front of Saul’s face, and he shook his head. Nicholas gave him a quizzical look.

“Sorry. Just… zoned out, I guess,” Saul said. “Dana’s right, though. We need someone new, someone this fucking city hasn’t heard.”

“Good luck with that,” Nicholas said. “That idiot was number… shit, I don’t even remember now.”

“Maybe we’ll get lucky.” Saul wasn’t sure he believed that himself, but it felt good to say, at least. His cell buzzed in his pocket, and he tugged it out to glance at the text message. “Huh.”

“Some guy named Jason Summerfield. Says he sang with Firestarter.”

Saul shrugged. “I suppose. I don’t know of any other Firestarter.”

“Didn’t they break up a few years ago?” Dana began packing her things. “I caught one of their shows. If it’s the same guy, he’s fucking good.”

My name is Jason Summerfield. I found your ad and am looking for a new band. I just moved to town a few weeks ago, but I fronted Firestarter for several years in Atlanta.

“What have we got to lose?” Nicholas asked as he put away his guitar.

“I’ll set up a time tomorrow then,” Saul said.

While Noah and Dana finished getting their things together, Saul replied to the text.

Hey there. I’ve heard of Firestarter, though I never saw you guys live. I play bass for Scorned Gods. I’d like to meet and chat, see if you’d be a good fit. When’s a good time for you?

A few minutes passed, and Saul walked Dana and Noah to the front door of his loft. Just as he shut the door, his phone buzzed again.

Anytime tonight would be great.

He texted back, How about eight?

Saul grinned. If this guy was as good as Dana claimed, maybe things would work out after all. He grabbed his laptop off the kitchen table and sat down on the couch. A quick Google search yielded photos, mp3 clips, and vids of Firestarter. Saul stared at a promo pic of Jason Summerfield.

Myc has been writing professionally since 2005, solo and with Shayne Carmichael. Genres include pretty much anything (no steampunk yet), though Myc is well known for paranormal stories. When not writing, Myc is usually playing PC games, reading, watching Netflix, and spending way too much time on Facebook. Since the question has come up in the past, pronouns are not an issue. Myc is bio-female, mentally male, and 100% genderfluid, so any pronoun works!