Kamose, undead before he was pharaoh, has lived on fringes of the vampire realm for thousands of years. He feels no kinship to the bloody bastards. Against vampire laws, Kam kills his master, the only man who loved him. He pays for that atrocity every day. Allowing Kam’s sarcophagus to be desecrated and tossed into a pile of trash as if he were truly dead, even God deserts Kamose. Until Matthias, the thirteenth apostle, crosses his path.

Saint Matthias should have been one of the twelve apostles. Instead, he gains the position after Jesus’ death. By then he’s a monster subsisting on human blood. Every bite, every draw of sustenance fills him with guilt he can’t assuage. The only time he experiences peace is in the arms of a much older creature. A vampire so vile and sacrilegious, Matthias fears he’ll cause both their souls to burn in Hell!

As he peered across the room, watching Matthias flip through pages of the bible, Kamose swept his thumb over the amulet he always worn around his neck — a polished amber ball held in the claws of the beetle, a symbol of immortality, resurrection, transformation and protection.

Aware he was being observed, Matthias casually pushed a few stray strands of blond hair behind his ear as he continued reading. The apostle had the supple body of a dancer — a trim, agile build that enticed Kam every time he moved. Loathe to employ what he termed sorcery or tricks, Matty walked most places, at least those he could reach on foot. The habit kept his muscles limber, his body fit. Even without employing magic, when Matthias crossed a room, it was as if he floated on air.

The composure Kam sensed Matty feigned became annoying. “You belong to me.” They’d argued the point for days. Kam had never before vacillated in regard to his needs or wants, yet nearly a month after commandeering the apostle from the king’s home, Kam was aware that forcing sex would only exacerbate an already impossible condition.

Kam had shared an infinitesimal amount of blood with the younger vampire the first time they fucked, but he needed to fully claim Matty to alleviate the present situation. He’d given the godly fanatic a way to creep into the corners of his mind he sometimes failed to secure. That access had served to ramp Matty’s aggravation to a level beyond Kam’s control.

A prime example — Matthias had used that one drop of Kam’s blood to locate Joshua, with the idea of destroying his former lover. Damn apostle will be the death of me. “For as much as I’m living, I might as well meet true death.” Kam had experienced no day-to-day joy, no physical release. “I haven’t been with a man in weeks.” That was a first for Kam. Sexual desire raged every time Matthias entered a room, each time Kam caught his scent when traversing his domain. “If you don’t succumb, I’ll pursue another.” Strong shields had been set but if he left Matthias unattended, he might find a way around them. Matthias was the wiliest of bastards.

“Why harangue me?” Matthias looked up. “I’ll never be yours.” His scowl contained abhorrence. “My life, too, has been grossly unfair and you, Kamose, are a corrupt degenerate I should have left to die.”

“But you didn’t.” Crossing the floor, he leaned in until his cool breath brushed Matty’s face. “My patience wears thin, Matty. Whether you believe you’re mine or not will soon no longer concern me.” Snatching the holy book and tossing it to the floor, he pulled the vampire from the chair and grasped his ass. “This is mine. Don’t ever forget that.”

“Well, well. Do I detect passion?” Matthias’ stoicism had slipped. “Nice to hear you have that in you, though I prefer it the other way around. Anyway, Jesus might mind you wiggling your dick in my ass.”

“God have mercy on your soul!”

“We’re going out. I’ll show you places in town I’m sure you haven’t seen.”

“I’m not diving into any bars.”

“Christ’s sake, how have you managed to survive? It’s dive bar. So called for their seediness. And I’m talking about fancy eateries.” Kam drew Matthias into an embrace. “Don’t make the mistake of thinking I only seek satisfaction in bars. You should see some of the waiters in these places.”

Matty flinched at Kam’s use of the Lord’s name. “You, you’re a nasty prick.”

“That spark of fire looks good on you.” Kam kissed him hard, sending his tongue into corners he couldn’t banish from his mind — corners he remembered had once received him without complaint. Filling his fist with hair, Kam held the man close, gave no quarter for escape. It took only seconds to realize Matty was kissing him back. Matty’s hands swept Kam’s sides and shoulders before clutching in desperation. Tables turned as the young vamp’s mouth captured and held Kam’s. Deliciously, tongues touched, tasted. Beyond a shadow of a doubt, Matthias was as near to Heaven as Kam would get.

Drawing away, Kam stared into gunmetal eyes that showed little blue. Thunderous gray glared back. Fuck it. “No human, nor God or his son, certainly not a vampire alive can have you. No one takes what’s mine.” 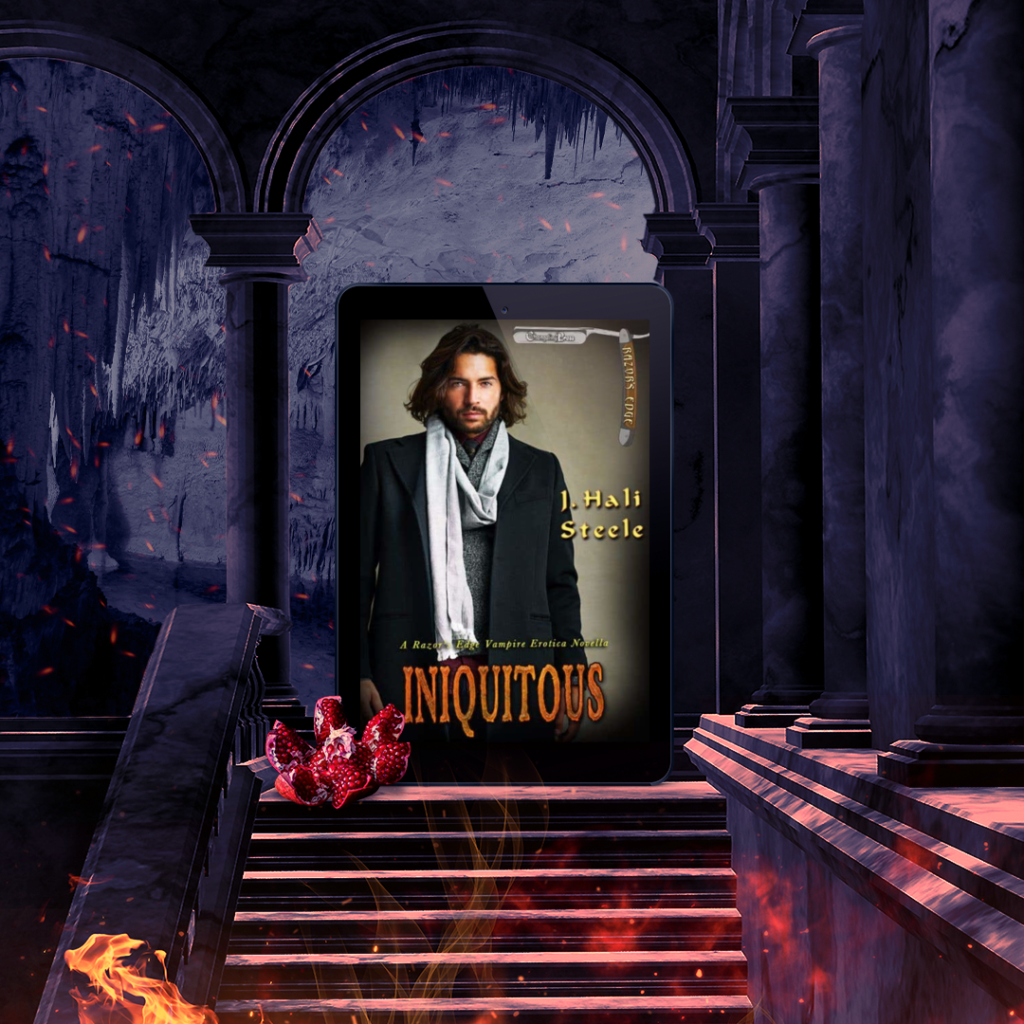 Multi-published and Amazon bestselling author of Romance in Paranormal, Fantasy, and Contemporary worlds which include ReligErotica and LGBTQ stories where humans, vampyres, shapeshifters and angels collide — they collide a lot! When J. Hali’s not writing or reading, she can be found snuggled in front of the TV with a cat in her lap, and a cup of coffee.

Growl and roar — it’s okay to let the beast out. — J. Hali Steele